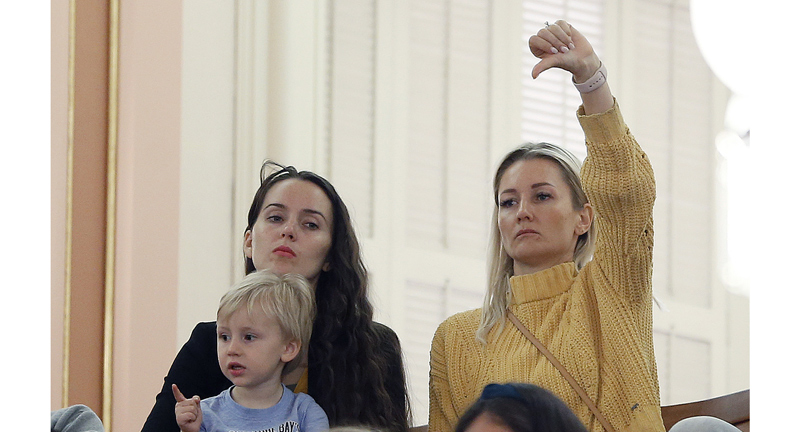 SACRAMENTO — A California Assembly committee on Thursday advanced a bill to tighten the state’s rules on vaccination exemptions, but there remains disagreement about the measure among Assembly Democrats.
Some members of the Assembly Health Committee say the bill will help protect children amid a surge in measles cases in the United States. Sen. Richard Pan, the bill’s author, says California can’t allow “a handful of unscrupulous physicians to put our children in danger.”
Assemblywoman Autumn Burke said she thinks the bill takes away choices for families. She did not support it.
Hundreds filed through the committee hearing at the state Capitol to speak against the legislation. The bill would require that state public health officials review exemptions granted by doctors who issue more than five a year.

Officials say that threshold is needed to provide “community immunity,” which protects those who haven’t been vaccinated for medical reasons or because they are too young.
The measure, which Newsom said he will sign if it reaches his desk, comes as measles cases have reached a 25-year high in the U.S. Lawmakers in other states also have been considering changes to confront the increase.
Maine eliminated religious and philosophical exemptions, while New York lawmakers ended a religious exemption. Washington state halted most exemptions for the measles vaccine, though legislators in Oregon defeated a measure that would have made it harder for families to opt out.
The California legislation is aimed at stopping some doctors from selling immunization exemptions, which supporters of the bill said has become a growing problem since the state ended non-medical exemptions in 2016.
New figures show the rate of kindergartners with permanent medical exemptions has quadrupled since California banned personal exemptions, and more than 100 schools have medical exemption rates exceeding 10%.

Among provisions in the revised California legislation:

Supporters said the legislation would permit exemptions for the less than 1% of students who should avoid vaccinations because they would have a severe allergic reaction or have impaired immunity from a liver problem, HIV, chemotherapy, or other conditions.

Witness at Navy SEAL Trial: I Killed Victim Out of Mercy