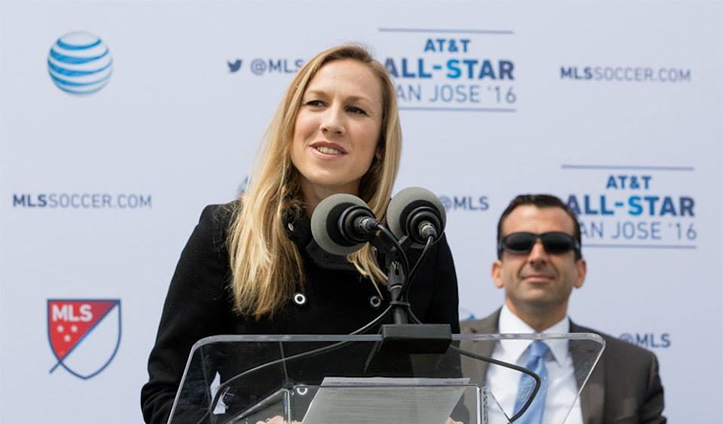 Kate Scott, who grew up watching the Fresno Falcons, made history Sunday.
The 2001 Clovis High School graduate called the play-by-play for the St. Louis Blues-Chicago Blackhawks game on NBCSN.
The International Women’s Day game was the first professional ice hockey game broadcast in the United State led entirely by women.

When I was a little girl playing hockey wasn’t an option where I lived, but I still loved it. My dad and I cheered on our local minor league franchise, the Fresno Falcons, as often as we could. I’m humbled to be a small part of another step forward tonight. #HockeyIsForEveryone pic.twitter.com/oyj1uPyepP

“I have loved every sport since I was a little girl,” said Scott, who has worked five-plus years calling Pac-12 football and juggles multiple duties with NBC Sports.
In the days before Sunday’s game, Scott recalled attending Falcons’ games with her father.
“My dad and I would go as often as possible,” she told nbcsports.com/chicago. “It felt like we were there almost every weekend. It was our thing. He would get cheap beers and let me go down between periods because the guys walked off in an area where we could high-five them or get autographs.
“And, after going for a couple years, all the guys knew me and were wondering who this little girl is that knows all of our names and they were giving me pucks and sticks and stuff. So that was kind of my first experience with hockey and I loved it.”

Hockey Is ‘Hardest Sport to Call’

Scott initially was concerned Sunday’s telecast would be perceived as a publicity stunt.

Since graduating from UC Berkeley in 2005, Kate has assembled an impressive body of work which includes sideline reporting for Major League Soccer that won her a local Emmy in Northern California.
Scott wound up with an exciting game to call as the Blues shut out the Blackhawks, 2-0, with St. Louis goalie Jake Allen turning away 29 shots.