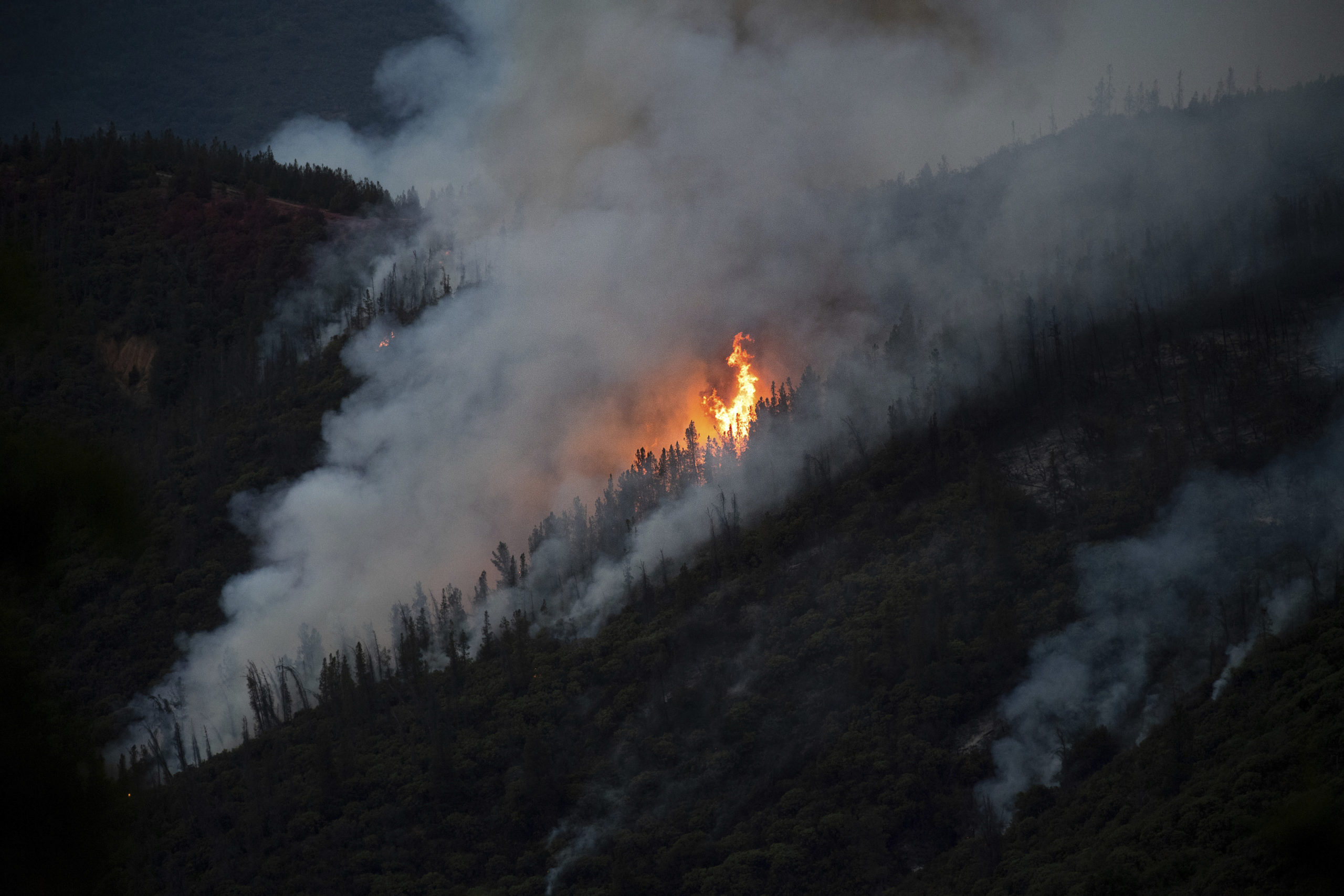 MARIPOSA — A deadly wildfire near Yosemite National Park shrouded the popular destination in smoke and left some tourist-dependent businesses hurting Monday, but visitors still braved trails, campgrounds, lodges and restaurants in the California park, officials said.
Amenities were open and visitors posted photos on social media as they hiked in smoky conditions, but the growing flames shut down a key route into the park at the peak of tourist season. A stretch of State Route 140 has been closed since the weekend, and drivers have been urged to find alternate ways into the park.
“All the campgrounds and the hotels are open — the shuttles are running,” Yosemite spokesman Scott Gediman said. “We have limited visibility, but aside from that, the park is open and fully operational.”
Time-lapse video by the Yosemite Conservancy, a group that supports the park, shows billowing smoke enveloping and completely obscuring Half Dome, an iconic rock formation. Park webcams showed other landmarks, such the El Capitan rock formation, concealed by thick plumes of smoke.

Businesses along the highway in Mariposa, a town popular with park visitors, have taken a hit, though the flames haven’t reached them.
Gopal Das, owner of a Quality Inn, said at least 50 people have called to cancel their reservations since Sunday.
“We’ll lose that revenue,” Das said. “Since it’s a fire hazard, it is something beyond everybody’s control, and that means we won’t be able to charge them for late cancellations. It could result in thousands of dollars in losses.”
Tourists also dealt with road closures last summer, when a fire threatened Mariposa and forced evacuations.
A trickle of people visited the Sierra Artists’ Gallery, but it was still better than last year, when Mariposa was a ghost town, said Marjorie D’Esposito, a gallery volunteer.
“Nobody is buying,” she said. “I don’t think they’re really interested in buying artwork right now.”

The blaze scorching dry brush along steep, remote hillsides doubled to 14 square miles and was largely burning out of control, U.S. Forest Service spokesman John DeYoe said.
Inaccessible terrain and temperatures spiking to 95 degrees made it difficult for crews to slow the blaze that started Friday. More fire engines were expected to arrive to try to stop the flames from reaching more than 100 homes and commercial buildings that are threatened, DeYoe said.
Evacuations were ordered over the weekend for the Yosemite Cedar Lodge, which is outside the park, and in nearby communities as flames crept up slopes and the air became thick with smoke.
Danette Moreno, 64, said she, her husband and their dog left their home in Mariposa Pines shortly after midnight Sunday and went to a shelter. The couple retired to their home about five years ago from the Los Angeles area and said they had seen three fires in that time, but this was the first time they had to evacuate.
“My attitude is never ‘Why me?'” Moreno told the Merced-Sun Star newspaper. “It’s out of our hands.” 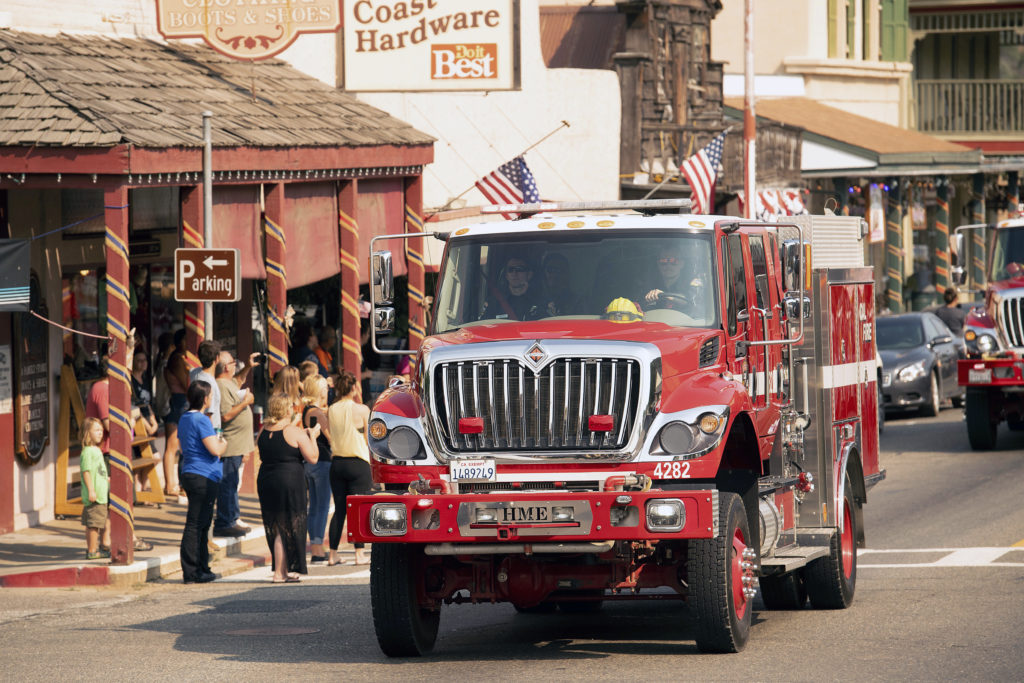 A fire truck, part of a procession carrying the body of firefighter Braden Varney, makes its way along Highway 140 on Monday, July 16, 2018, in Mariposa. Varney died when his bulldozer overturned as he battled the Ferguson fire. (AP Photo/Noah Berger)

A firefighter driving a bulldozer died early Saturday as he worked to keep the flames from extending into a nearby community, the California Department of Forestry and Fire Protection said.
Crews retrieved the body of heavy fire equipment operator Braden Varney, 36, on Monday after he died in steep, rugged terrain, Cal Fire Deputy Chief Scott McLean said. Firefighters took turns keeping vigil near Varney’s body and saluted as it was taken to a coroner’s office in a procession that included firetrucks and sheriff’s vehicles.
Workplace safety officials are investigating Varney’s death and will look for any violations related to his training or the maintenance of the bulldozer, said Frank Polizzi, a spokesman for the California Division of Occupational Safety and Health. Polizzi said his office was told that Varney’s bulldozer rolled over.
Varney, who was married with two young children, had worked for Cal Fire for 10 years.
The wildfire that killed Varney is one of several burning across the state and among 56 large blazes that are active in the U.S., most in the American West, a region struggling with drought and heat.