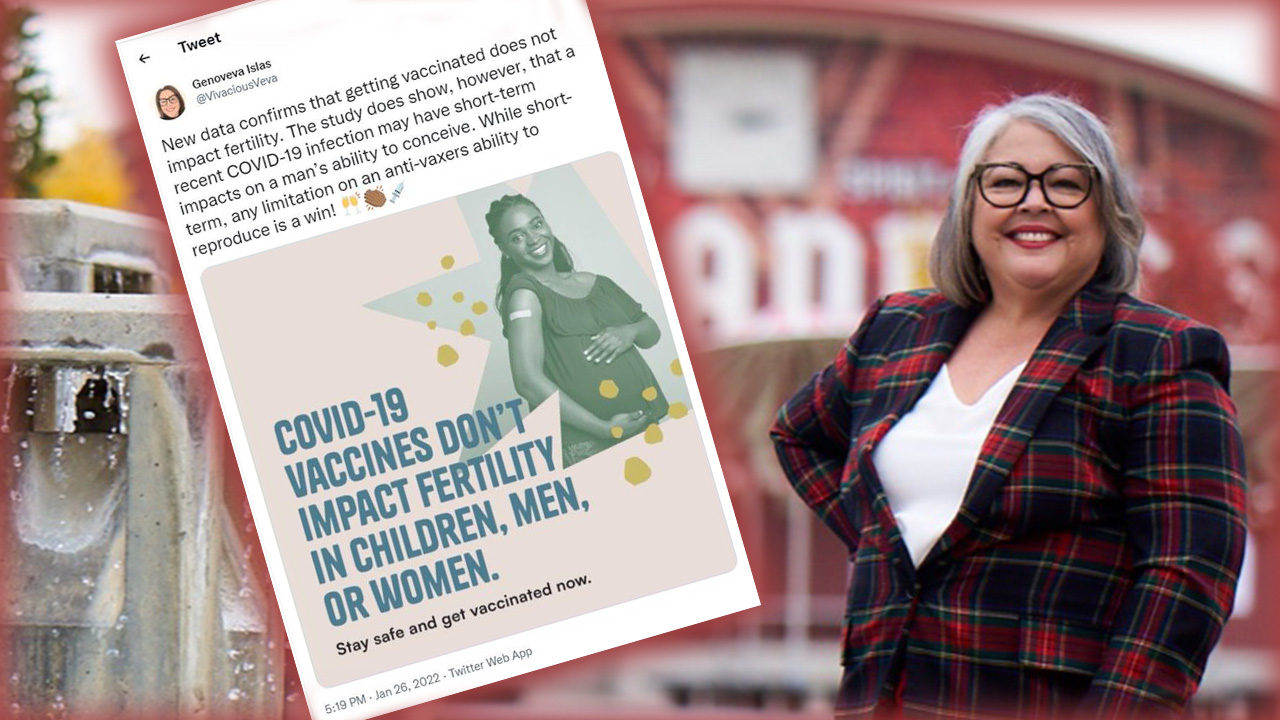 Fresno Unified Board Clerk Veva Islas raised a few eyebrows this week with a tweet that says she’s happy if vaccination opponents infected with COVID-19 may be briefly unable to have children.

Islas, a public health advocate who heads Cultiva La Salud, a nonprofit for health equity in the Valley, tweeted Wednesday on her personal Twitter account about how new data should allay concerns that the COVID-19 vaccination may cause infertility.

Those concerns have been cited by many vaccination opponents, including Green Bay Packers quarterback Aaron Rodgers.

Her tweet also says the same study showed that a recent COVID-19 infection could have short-term impacts on a man’s ability to “conceive.”

The tweet’s final sentence celebrated the potential brief infertility of unvaccinated men infected with COVID-19: “While short-term, any limitation on an anti-vaxers (cq) ability to reproduce is a win!” The sentence was followed by emojis of clinking glasses, applause hands, and a hypodermic needle.

Islas did not return a telephone call Thursday seeking comment from GV Wire.

Tom Holyoke, a political science professor at Fresno State, told GV Wire that he hopes public officials will be more judicious in their public comments on divisive issues such as the COVID-19 vaccine.

“In difficult times like these, elected officials should be careful about what they say and not inflame the differences between those who are vaccinated and those who are resisting the vaccine,” he said Thursday.

Officials need to be sensitive to those who are vaccine-hesitant because they may have been exposed to and believe reports from questionable sources saying that the vaccine can rewrite a person’s DNA or cause other harm, he said.

“Just because someone is not vaccinated doesn’t make them an anti-vaxxer,” he said. “They may not have had time yet to be vaccinated or may be ill-informed.”

And, Holyoke said Veva’s tweet on her personal Twitter account, which is blocked to some users, is part of the “public domain” since she is a public official as a member of the Fresno Unified School Board.

He said he wasn’t sure how such tweets might affect Islas’ upcoming re-election bid. The McLane High Area 4 Trustee seat is on the November ballot.

“It’s possible an opponent could use this against her,” Holyoke said.

Islas has a history of controversial tweets, including her 2021 flame war with local conservative leader Michael Der Manouel Jr. in which they called each other a racist.

New data confirms that getting vaccinated does not impact fertility. The study does show, however, that a recent COVID-19 infection may have short-term impacts on a man’s ability to conceive. While short-term, any limitation on an anti-vaxers ability to reproduce is a win! ???? pic.twitter.com/ZRhwAb6bh7 Genoveva Islas (@VivaciousVeva) January 27, 2022

Related Topics:anti-vaxxersTwitterVeva Islas
Up Next

He Dealt Fentanyl to Bullard High Student. At 19, He’s Headed to Federal Prison.