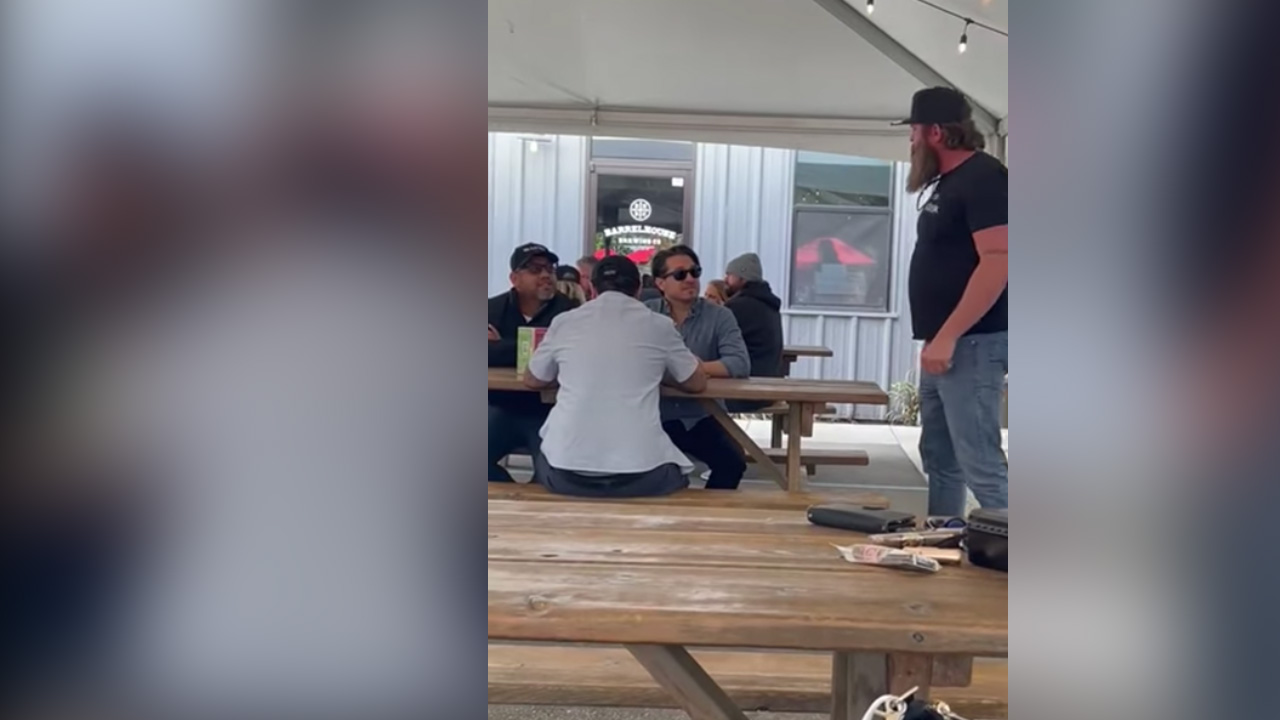 A prominent right-wing activist engaged in a profane diatribe against a Fresno city councilman when both happened to be at the same Central Coast restaurant for lunch on Sunday.

Video from both parties showed Ben Martin yelling at councilman Miguel Arias while both men were eating with their respective groups. Arias says he is filing police reports over the incident.

“You are worthless. You don’t do your job right. You’re a horrible f****** person. Seriously. I hate that guy,” Martin said while confronting Arias at a table set up underneath a tent at the BarrelHouse Brewing Co. restaurant near Paso Robles.

Arias responded with “have a good day, brutha … enjoy your lunch.”

Martin continued with the insults as he returned to his table. He vowed to get Arias “thrown off that board.”

Related Story: DA: No Charges Against Arias for Protester Altercation

“City Councilman Miguel Arias is confronted by me for being a mask Nazi, a fraud, and a hypocrite! Pass it on,” Martin wrote.

No one in the video is seen wearing a mask. However, masks are not required while dining.

Arias accused Martin of making physical threats, not seen in the video.

“Fellow customers stood up to them and politely asked that they refrain from this aggressive behavior. Ben and his group refused to do so and a brave waitress escorted them off the premises. They subsequently returned to the dining area and threatened to smash my head into the cement when I departed the venue,” Arias said in a statement on Facebook.

Martin denied Arias’ account in an interview with GV Wire℠.

“I actually did not threaten at all,” Martin said. “I would never threaten anyone. I’m not a violent person at all. Not at all.”

Martin’s Version of the Story

Martin says eating at the same restaurant and the same time was coincidence.

“As soon as I noticed him, I went over and I approached him. I introduced myself as Ben Martin and I went to shake his hand. He says, I know who you are. And he said, I quote, ‘I’m not shaking your f******* hand,” Martin said.

Martin says he called Arias a hypocrite for policies that shut restaurants in Fresno, while dining with his party at the BarrelHouse.

“If you saw a city councilman who’s closed down the city, has voted against people be able to do outdoor dining, has as a completely different stance than you … wouldn’t you think it was hypocritical that he’s out behaving in a way that he openly contradicts for his own city?” Martin said.

Martin was unaware if he was asked to leave by the waitstaff, as Arias alleged. He was already in the process of going, Martin said.

Martin has led demonstrations in the past, protesting Fresno businesses for enforcing a mask mandate. In January, police were called to keep the peace when Martin’s group protested at Sprouts Farmers Market. It was reported that the store filed a restraining order against Martin.

“I will file a complaint with the Paso Robles Police Department and San Luis Obispo County Sheriff’s Department,” Arias said. “Additionally, I have notified the Fresno Police Department of this situation. I have and continue to take legitimate threats against my personal safety – and the safety of those with me – seriously. I will explore all legal options regarding this incident with Ben Martin.”

Messages left with both law enforcement agencies and the restaurant were not returned.

Martin is scheduled to appear in court on Tuesday for an unrelated temporary restraining order filed against him by his sister.