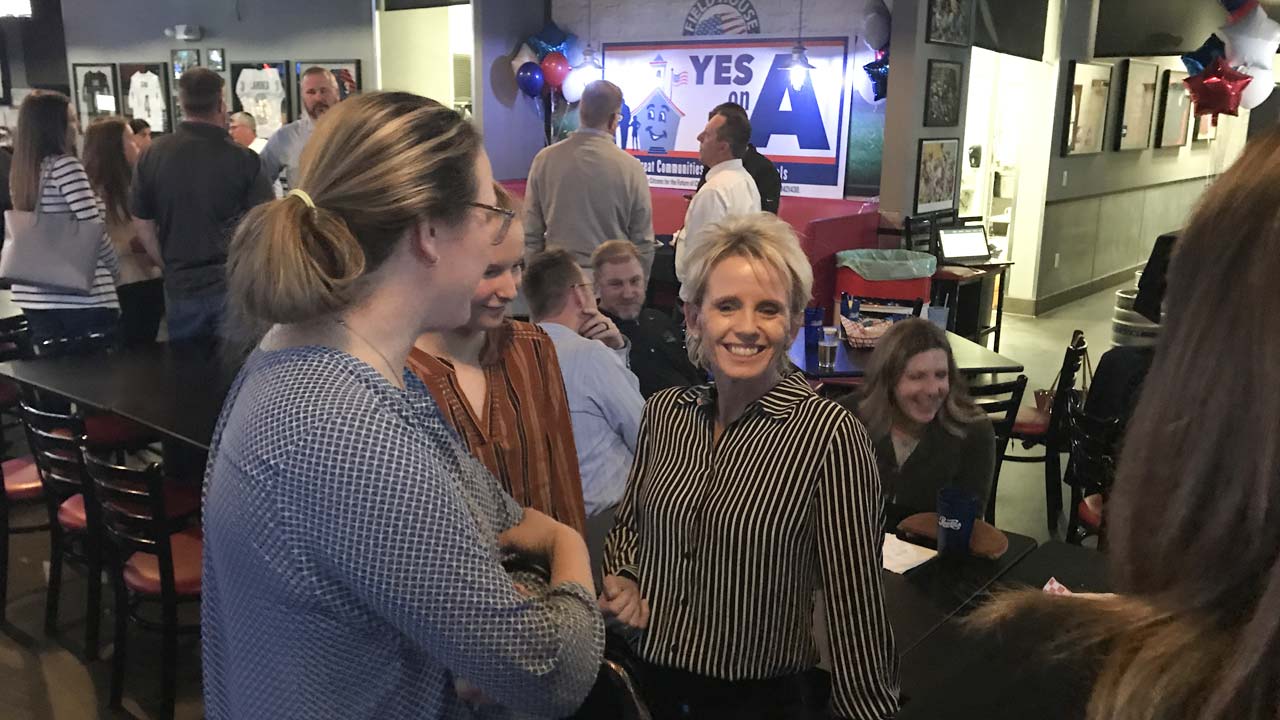 Supporters of Clovis Unified School District’s Measure A bond measure were hoping for a victory celebration Tuesday evening as they gathered at a northeast Fresno eatery to wait for election returns.
But when early results that showed the $408 million bond measure that was losing by a margin of 52% to 48% by 11 p.m. Tuesday and with potentially thousands of votes yet to be counted, most were taking a wait-and-see attitude.
Superintendent Eimear O’Farrell said she remained cautiously optimistic about the election outcome, since surveys of residents and phone banking prior to the election conducted by the bond measure’s political campaign had indicated it would reach the 55% threshold for passage.

The news was somewhat better for Fresno Unified’s Measure M, which was ahead by a margin of 58% to 42% by 11 p.m. Central Unified’s Measure C was showing a favorable “Yes” margin of 53% to 47%, though still below the necessary 55% threshold.
Fresno Unified Superintendent Bob Nelson said later in the night that the election was still too close to call.
“However, we are incredibly optimistic and happy with the trends thus far,” he said. “While we keep an eye on Measure M’s progress, we are also hoping for the best for all of our neighboring school districts’ bond measures on the ballot tonight.”
Central spokeswoman Sonja Dosti said the election results were still inconclusive Tuesday evening, and the district plans to issue a statement at 8:30 a.m. Wednesday.
Update: Dosti released the following statement Wednesday: “As of this morning, we believe the margin in the number of votes needed to pass Measure C is too close to call. We’re encouraged that with each update from the election office yesterday, the percentage in support of Measure C increased. Based on yesterday’s upward trend in favor of the bond, we remain hopeful about the outcome after the remaining ballots are counted.”

No. 13 May Have Been Bad Luck For Proposition

Meanwhile, voters statewide appeared to be rejecting Proposition 13, a $15 billion bond measure for facilities improvements and repairs at public schools and colleges across California. With 55% of the state’s precincts reporting, the proposition was losing by a margin of 57% to 43%. Unlike the local school bond measures, state propositions only require a simple majority to win passage.
A major campaign was conducted to garner support for the proposition, which was intended to augment local spending on facilities projects, and no viable opposition surfaced. Supporters of Proposition 13 contributed more than $17 million to campaign efforts, according to finance records filed with the Secretary of State.
However, the measure may have been hobbled by its association with the original Proposition 13 that capped property tax increases and is considered the “third rail” of California politics.

Supporters of the Clovis and Central bond measures created committees and raised money to conduct political campaigns. The Citizens for the Future of Clovis Schools — Yes on Measure A raised nearly $300,000 starting last year, money that paid for mailers, door hangers, yard signs, and other political paraphernalia.
Meanwhile, Central’s committee, Citizens for Central Schools — Yes on Measure C 2020 raised $43,000, according to campaign finance reports.
By contrast, Fresno Unified’s trustees delayed voting to put Measure M on the March ballot, and no campaign committee was created to advocate for the measure.

The largest local school bond measure on the ballot was Measure A, a $408 million bond measure that would raise property taxes about $25 per $100,000 of assessed value, for a total of $179 per $100,000 of assessed value.
Measure A’s biggest project is the $250 million Bradley Education Center project, an intermediate and a high school complex near the intersection of Highland and McKinley avenues in the far southeastern portion of the district, where enrollments are threatening to overcome classroom space. The bond measure also would pay for repairs and modernization projects at existing schools across the district.

Fresno Unified’s Measure M was the second-largest, at $325 million. A survey of district voters in the fall showed support for a bond measure as high as $500 million — the district’s unfunded facilities needs are estimated at twice as much— but the board decided to hold the bond measure to $325 million to limit the impact of a property tax rate increase on district residents, many of whom are low-income.
Residents in the district now pay $189 per $100,000 of assessed property value, and Measure M would add $25, raising the tax rate to $214 per $100,000 of assessed value.
The list of projects includes new and upgraded air-conditioning systems, lead and asbestos removal, improved campus security, a new specialty high school, new or remodeled school libraries, new cafeterias, and new preschool and kindergarten classroom buildings at six elementary schools.

Central Unified’s Measure C was the third Fresno-area school bond measure on the ballot. The $120 million bond measure contains money for a new elementary school and to complete the new high school being built at Grantland and Ashlan avenues.
Measure C would cause the property tax rate to climb by $60 per $100,000 of assessed value. The current tax rate is $150 per $100,000 of assessed value.
Central Unified had surveyed voters about bond measures totaling $110 million and $120 million and found strong support for both. Trustees opted to seek approval for the larger amount to cover more needs.

Proposition 13 is the $15 billion state bond measure for repairs, maintenance, and new buildings at public schools and colleges across California.
Nine billion dollars would go to K-12, and $2 billion each to the state’s community colleges, California State University and University of California campuses.