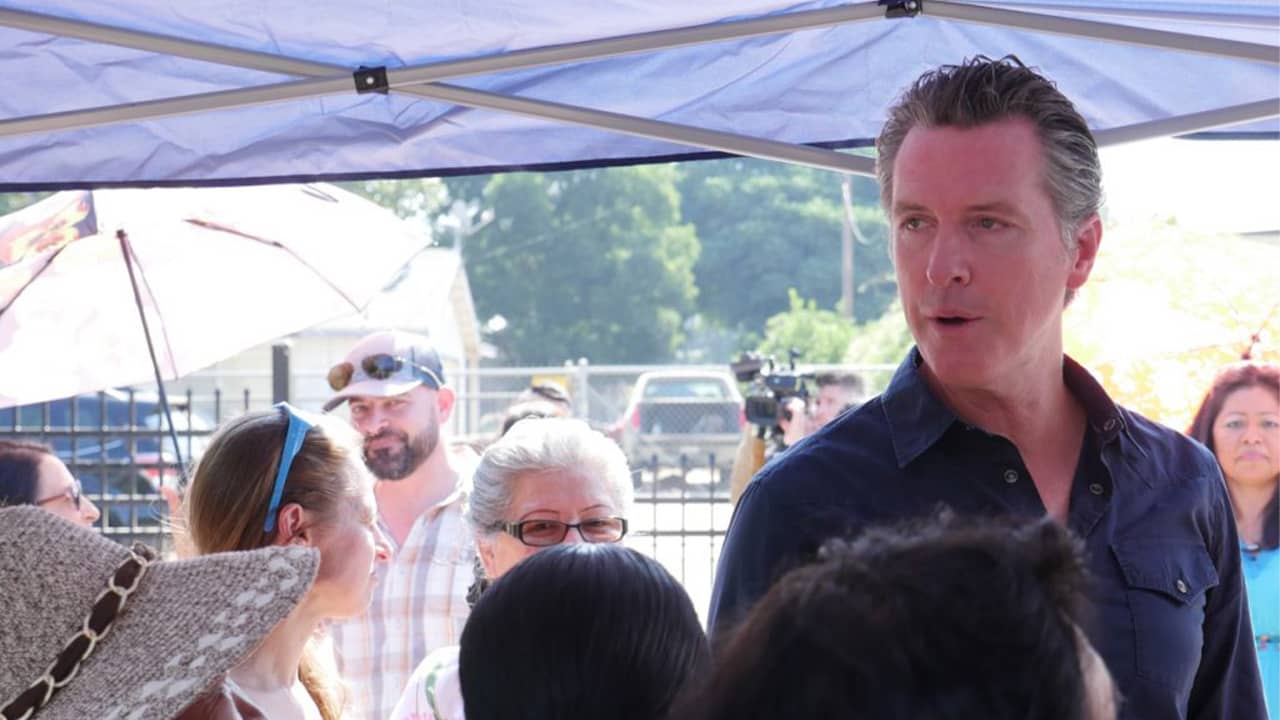 Visiting a dot on the map in Fresno County called Tombstone, Gov. Gavin Newsom hoped to put an end to unsafe drinking water. The governor on Wednesday came to a home south of Sanger and signed the Safe and Affordable Drinking Water Fund (SB 200), which will provide up $130 million a year for infrastructure and maintenance of water facilities.
“The idea that we are living in a state where over a million people don’t have access to clean, safe, affordable drinking water is a disgrace,” Newsom said after signing the bill. “This is the wealthiest state, the wealthiest democracy in the world. And it happened on our watch. We own this.”
He said people don’t belong in positions of power if they can’t provide safe and clean drinking water.
“This is a point of deep pride. Some folks wonder why the hell you get into politics? This is the why,” Newsom said.

Not Coming from High-Speed Rail Money

“The idea that we are living in a state where over a million people don’t have access to clean, safe, affordable drinking water is a disgrace.” — Gov. Gavin Newsom
After much negotiation, Newsom scrapped ideas to pay for the water infrastructure with new taxes. Instead, the money will come from the cap and trade program aimed at improving air quality.
Newsom said his signing of the water legislation doesn’t signal a priority of one over the other.
“I don’t see them as necessarily competing,” Newsom said. “There are a lot of things in the cap and trade that I think deserve to be prioritized.”
The cap and trade program requires the state’s biggest polluters, like oil refineries and farms, to buy credits that allow a certain level of emissions. The program has generated more than $9.5 billion since its inception, and state officials are supposed to use that money to reduce greenhouse gas emissions to improve the environment and public health.
The high-speed rail project draws upon the cap and trade program for its funding. That won’t be affected by the clean water bill.
“High-speed rail money is secure as it relates to its allocation of 25%. Cap and trade does not dilute from that priority,” Newsom said.

California voters have approved billions of dollars in infrastructure projects for water districts over the years. The problem, advocates say, is smaller water districts can’t afford to maintain them. The proposal would authorize spending through 2030 to help these districts with operating costs, including consolidating smaller districts to help improve management and finances.
Instead of taking the money from the state’s general fund and its bountiful surplus, lawmakers agreed to tap into the cap and trade program. Some lawmakers are alarmed by the idea of raiding the program to pay for other things.
“We’re pitting clean water against clean air. We know Californians can and must have both of them,” said Sen. Bob Wieckowski, D-Fremont, the only lawmaker to vote against the bill earlier this month.
Among the Valley delegation, Shannon Grove, R-Bakersfield; Melissa Hurtado, D-Sanger; and Anna Caballero, D-Salinas, voted yes. Andreas Borgeas, R-Fresno, was not present to cast a vote, but his office said he supports the bill.
Newsom explained why he was leery of using the budget surplus to fund clean water.
“It falls flat for one reason. Surpluses are not ongoing. We would love them to be. They are usually one-time. Surpluses come and go. When they go, what are you going to do to address the issue we are trying to address?” Newsom said. “Their argument is, I think, misleading and weak at best.”

Newsom met with neighbors to hear about their struggle with dirty water. The bill’s author, state Sen. Bill Monning, D-Carmel, attended, along with Caballero and Assemblyman Richard Bloom, D-Santa Monica. Despite the signing taking place in her home district, Hurtado could not attend. Her office said she is on a family vacation.
Neighbor Jovita Torres said she has enough to drink, but not enough to cook, bathe or wash clothes. “We experience stomach aches,” she said.
Perhaps coincidentally, the Culligan man arrived during Newsom’s roundtable, delivering water to homes on the street.
Correction: the original story said the state senate voted on the bill “Monday.” That vote took place July 8.