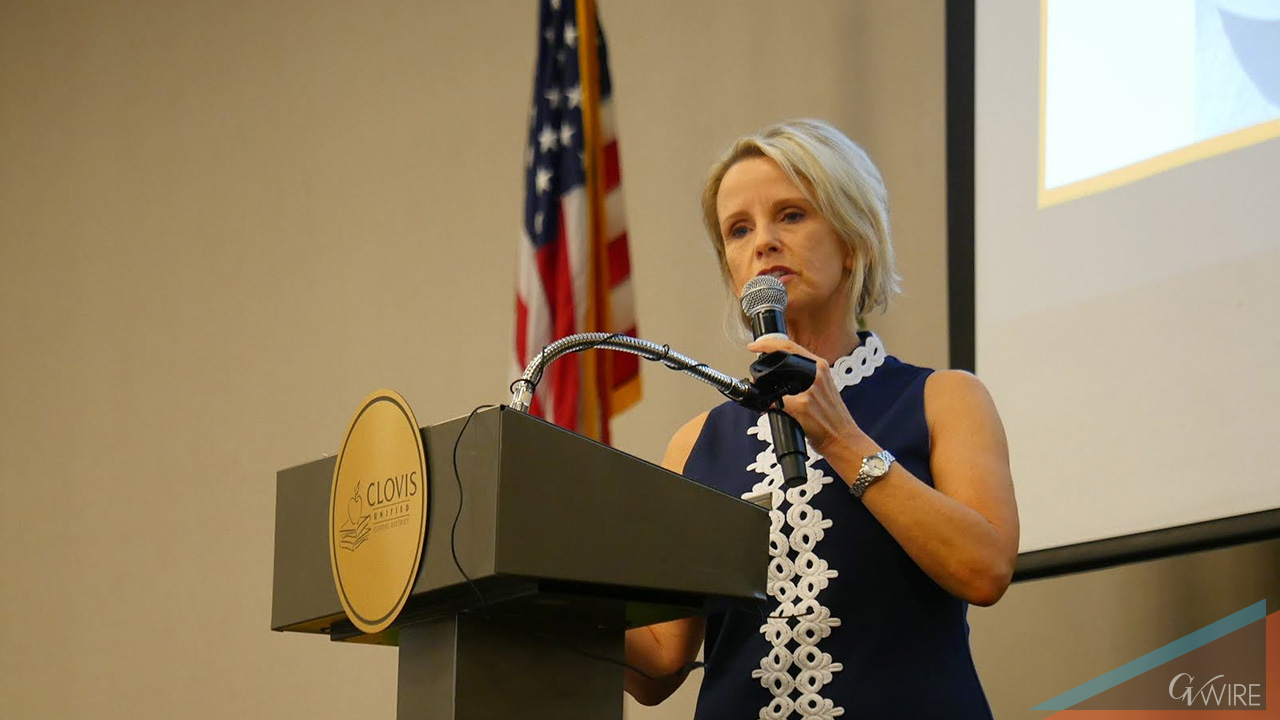 Clovis Unified School District Superintendent Eimear O’Brien, who has led the district since 2017, announced Thursday morning that she will be retiring.

O’Brien’s contract was not set to expire until June 2024. Her retirement is effective June 30.

She told reporters at a hastily called news conference that she was retiring to help her siblings care for her aging mother in Ireland. O’Brien, who appeared somber and subdued, said she will split her time between Ireland and the U.S., where her two daughters live.

O’Brien said she notified the School Board about her decision to retire Wednesday and then messaged parents and staffers Thursday morning.

“It was a very challenging decision, given the fact that this has truly been the greatest privilege of my life, serving as leader of the Clovis Unified School District,” she said. “… Like many people my age, I’m in that chapter of life where I need to step up and support my family
in taking care of an aging parent. It’s really pulling at my heartstrings to be there for my siblings and my family.

“Many of you might know that I have an almost 85-year-old mother in Ireland who really needs the love and care of her daughter. And so that’s really what has prompted me to essentially make that decision at this time, because I can tell you, I absolutely love my job.”

Board president David DeFrank said the School Board will hold a special meeting Monday afternoon to initiate work on finding O’Brien’s successor, including whether to conduct a national search. Although three superintendents were hired from outside the district, O’Brien and some of her predecessors were district employees before taking the top job.

DeFrank called O’Brien a “selfless, graceful, and effective administrator” who has been “crucial” to the district’s success, even through the challenges created by the pandemic.

At Monday’s meeting the board will discuss the timelines and criteria and procedures for selecting her successor, and whether to create a subcommittee of the board as a search committee, DeFrank said.

As in the past, he said he expects there will be “significant” community involvement in the discussions over hiring a new superintendent, which he does not anticipate will happen before O’Brien departs on June 30.

Whether the board will opt for a national search or try to hire someone already working for the district will be part of the discussion, DeFrank said that will be among the decisions the trustees will consider.

“I anticipate that we’re going to want as broad an applicant pool as possible,” DeFrank said. “But as Dr. O’Brien has pointed out, there are some unique qualities that come from being part of this school district, and that’s going to be a factor, as are a lot of others.

“And even the factors that will be considered are something that is going to be developed through our time with the community. Our community is going to have input in what are some of the specific criteria that we want to look for in the next superintendent. And so we’re going to, as a board, try and figure out what’s the best way to facilitate that. And that will be a big part of our discussion on Monday and probably our discussion going forward at that point.”

O’Brien said her biggest regret about retiring in June will be about missing the opening of the Terry Bradley Education Center southeast of Fresno between Leonard and Highland avenues north of McKinley Avenue. The campus will include an elementary, middle and high school plus an events center that will be able to accommodate regional competitions and events.

“There’s a tremendous amount of planning and organization going into literally opening an entire new area in Clovis Unified School District. It’s very exciting,” she said. “And it’s going to have a forward lean as we kind of lean into the 21st century. And I am very aware of all the work that’s going on behind the scenes with the construction and the city planning, work with our governing board, work with our communities, in terms of future work that’s going to occur around boundary changes and things like that. So I would love to have been able to be there to see that to fruition.”