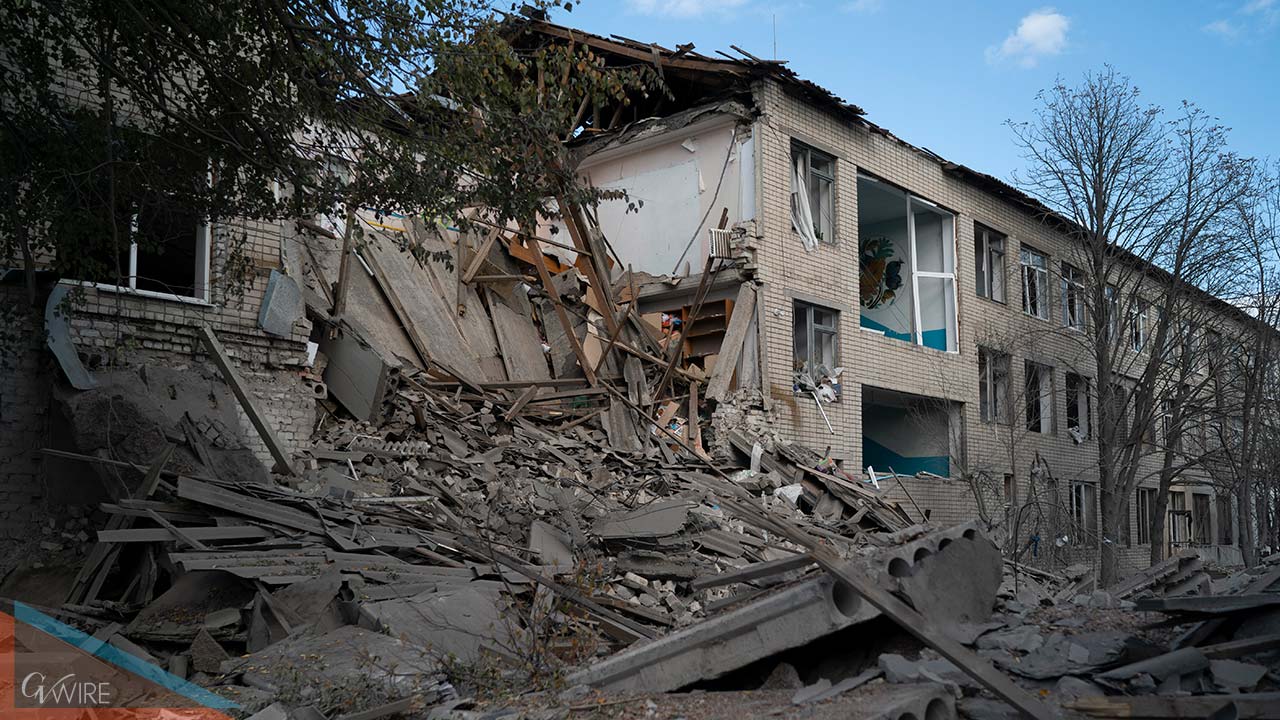 Debris covers an area of a heavily damaged school after a Russian attack, two days ago at the village of Velyka Kostromka, in Dnipropetrovsk region, Ukraine, Thursday, Oct. 13, 2022. (AP Photo/Leo Correa)
Share with friends

KYIV, Ukraine — Ukraine’s allies committed to supplying the country with advanced air defense systems as Russian forces attacked the Kyiv region with kamikaze drones and fired missiles at civilian targets elsewhere Thursday as payback for the bombing of a strategic bridge linking Russia with annexed Crimea.

Missile strikes killed at least three people and destroyed an apartment building in the southern city of Mykolaiv, while heavy artillery damaged more than 30 houses, a hospital, a kindergarten, and other buildings in Nikopol, a city located across a river from the Russian-occupied Zaporizhzhia Nuclear Power Plant.

Russia intensified its bombardment of civilian areas in recent weeks as its military lost ground in multiple occupied regions of Ukraine that President Vladimir Putin illegally claimed as Russian territory. Putin’s supporters urged him to escalate the campaign further to punish the invaded country for the Crimea bridge attack.

“We need to protect our sky from the terror of Russia,” Ukrainian President Volodymr Zelenskky told international representatives at the Council of Europe, a human rights organization. “If this is done, it will be a fundamental step to end the entire war in the near future.”

Responding to Zelenskyy’s repeated pleas for more effective air defenses, the British government announced it would provide missiles for advanced NASAM anti-aircraft systems that the Pentagon plans to send to Ukraine in the coming weeks. The U.K. also is sending hundreds of aerial drones for information-gathering and logistics support, plus 18 howitzer artillery guns.

“These weapons will help Ukraine defend its skies from attacks and strengthen their overall missile defense alongside the U.S. NASAMS,” U.K. Defense Secretary Ben Wallace said.

Germany has delivered the first of four promised IRIS-T air defense systems, while France promised more artillery, anti-aircraft systems, and missiles. The Netherlands said it would send missiles, and Canada said it would give about $50 million more in military aid, including winter equipment, drone cameras, and satellite communications.

Speaking at a progressive political event in Berlin, German Chancellor Olaf Scholz said Russian President Vladimir Putin “and his enablers have made one thing very clear: this war is not only about Ukraine” but rather “a crusade against our way of life and a crusade against what Putin calls the collective West. He means all of us.”

NATO plans to hold a nuclear exercise next week against the backdrop of Putin’s insistence he would use any means necessary to defend Russian territory, including illegally annexed regions of Ukraine. NATO is keeping a wary eye on Russia’s movements but has seen no change in its nuclear posture. Russia is expected to hold its own nuclear exercises soon.

On the battlefield Thursday in Ukraine, a five-story apartment building in Mykolaiv was hit by an S-300 missile, regional Gov. Vitaliy Kim said, referring to a weapon ordinarily used for targeting military aircraft but which the Russia appears to be increasingly using for imprecise ground strikes.

An 11-year-old boy was pulled from the rubble of the building after six hours, and rescuers later found two other people there, bringing the total to three. A fourth person was killed elsewhere in the city, the regional government said.

Residents of Ukraine’s capital region, whose lives had regained some normalcy when war’s front lines moved east and south months ago, were jolted by air raid sirens multiple times Thursday after the explosive-packed Iran-made drones found their targets.

Ukrainian officials said Iranians in Russian-occupied territories of Ukraine were training Russians how to use the Shahed-136 systems, which can conduct air-to-surface attacks, electronic warfare, and targeting.

The low-flying drones help keep Ukraine’s cities on edge, but the British Defense Ministry has said they’re unlikely to strike deep into Ukrainian territory because many reportedly are destroyed before hitting their targets. Ukraine’s air force command said Thursday its air defense units shot down six drones over the Odesa and Mykolaiv regions during the night.

Describing the scope of the retaliatory attacks carried out after the Saturday truck bomb explosion on the Kerch Bridge, the speaker of Russia’s lower house of parliament said Russian forces struck more than 70 energy facilities in Ukraine this week.

State Duma speaker Vyacheslav Volodin threatened an “even tougher” response to future Ukrainian attacks, although Ukraine has not claimed responsibility for the bridge bombing. The 12-mile span is a symbol of Moscow’s power and carries military supplies from Crimea, which Russia annexed from Ukraine in 2014.

“All the organizers and perpetrators of the terrorist attacks must be found; those who resist must be destroyed,” Volodin wrote on Telegram.

Russian forces experienced setbacks in southern and eastern Ukraine over the last six weeks as Kyiv’s troops waged counteroffensives that allowed them to recapture villages and towns — and to reveal the trauma of residents who lived under Russian occupation.

“It’s a disaster,” resident Tetyana Patsuk said of her house in the once small and quiet settlement. “I’ve been crying for a month. I am still shocked. I can’t recover from that feeling that I have lost everything now that I am 72 years old, and that’s it.”

The director general of the U.N.’s nuclear watchdog said Thursday that fighting around the Zaporizhzhia Nuclear Power Plant remained “concerning.” A Russian missile strike on a distant electrical substation Wednesday caused the plant to lose its last external power source, which is needed to prevent the reactors from overheating to the point of a meltdown.

“It hasn’t improved in any way,” International Atomic Energy Agency Director General Rafael Grossi said in Kyiv after returning from Russia. The agency is pushing for a demilitarization zone around the plant, which means “no attack against the plant and the plant not to be used as a tool to attack,” he said.

However, Grossi said he did not receive any indications that Putin was ready to discuss the definitive “parameters” of an agreement to prevent a radiation emergency at the biggest nuclear power plant in Europe amid the intense war.

Ukrainian Foreign Minister Dmytro Kuleba said on Twitter that he met with Grossi in a bomb shelter in Kyiv “while Russian terrorists kept firing missiles at Ukraine.” His post included a photo of the two men meeting in what appeared to be an underground room with pipes hanging from the ceiling and a Ukrainian flag on the wall.

“I reiterated that Russia must withdraw from the ZNPP to ensure its nuclear safety and security, immediately stop abductions and intimidation of the Ukrainian personnel,” Kuleba tweeted.

Parkland School Shooter to Get Life Sentence for Killing 17