Clovis School Board Winner Beats the Odds to Unseat Incumbent 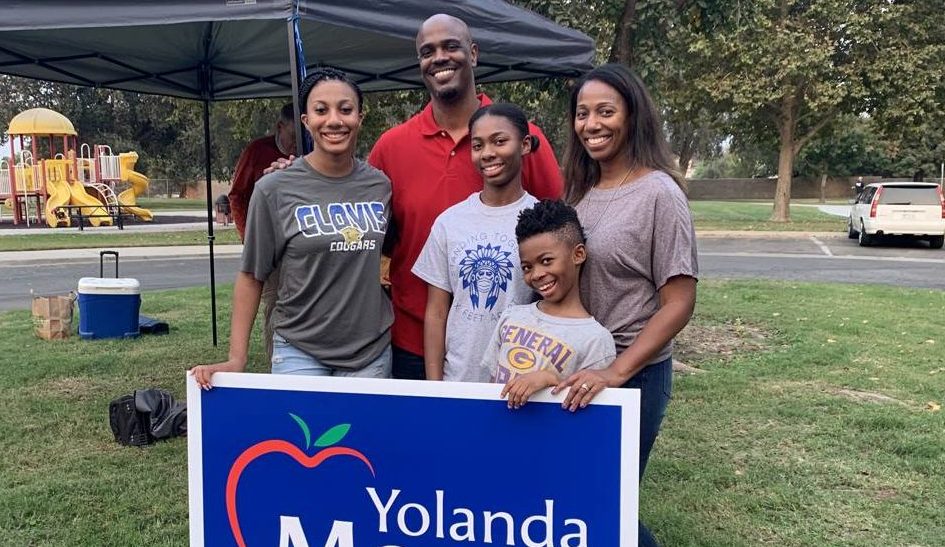 After months of campaigning, Yolanda Moore was ready to gather with her family Tuesday night and learn whether their hard work campaigning for the Clovis Unified Trustee Area 7 seat had paid off.

Every candidate hopes to win their election, and Moore, a physician assistant and mother of three, is no exception. But hoping and expecting are two different things, especially when you’re a candidate challenging an incumbent who has been in office for 12 years.

So when the first vote tallies were posted on the Fresno County Elections Office website, Moore and her family were somewhat in shock but also thrilled to see that she was leading over incumbent Chris Casado.

“We were like, ‘Oh, my goodness, these look so good, ” Moore told GV Wire℠ on Wednesday. “The kids were excited. My family was excited because this has been a group effort for me. You know, when you talk about a grassroots campaign, it was really just my family and my friends that believed in me and encouraged and supported this.”

The Clovis Unified races and other contests won’t be declared final until all the ballots are counted, but Moore was somewhat confident Wednesday evening that her 7 percentage point lead over Casado would not evaporate.

And while this is her first run for public office, Moore is not the first school board member in her family. She said her grandfather, Ernie Shelton, a Fresno State student services professional, was elected to the Fresno County School Board in the 1990s.

“It always inspired me just to see the impact that he had on young people and just how appreciative the families were of the time and the efforts that he made in the interests of students,” she said.

With two kids in Clovis Unified schools — daughter Joelle is in the seventh grade at Clark Intermediate and son Conrad is in the third grade at Gettysburg Elementary — Moore said she felt it was time to take her volunteerism and participation in district activities to the next level.

“No matter how great something is, there’s always room for growth,” she said. “And Clovis Unified has grown and expanded and our community has evolved.

“And so for me, running for School Board was just an opportunity for me to be a part of that growth and help with the evolution of the district at a higher level, just to make it better and better meet the needs of our students, our teachers, our community as a whole.”

But Moore, who campaigned for her grandfather when she was a teenager, said she laughed when she told her mother, “I don’t remember grandpa being half as stressed as I feel during this one.”

Her goals are the same as other Clovis Unified parents — getting kids back into school safely amid the coronavirus pandemic and also making sure that teachers are listened to and taken care of.

Moore, who apparently would be Clovis Unified’s first African American trustee, knows that she will bring a different voice and perspective to the board and leadership of the district, which has been racked in recent years by claims of racism from students and their families.

Racism is everywhere, not just in Clovis Unified or Clovis, and education is key to identifying and addressing it, Moore said.

“It is an interest of mine to make sure that we are exposing our students culturally to each other, because I think some of it is not outright racism,” she said. “I definitely think it’s present, but I don’t think it’s always outright racism.

“I think a lot of it is just a lack of cultural awareness. So if we can expose our children to more, they’ll know that certain jokes, certain terms, racist things are unacceptable and culturally or racially insensitive, and shouldn’t be accepted.”

US Consumer Borrowing up $16.2 Billion in September