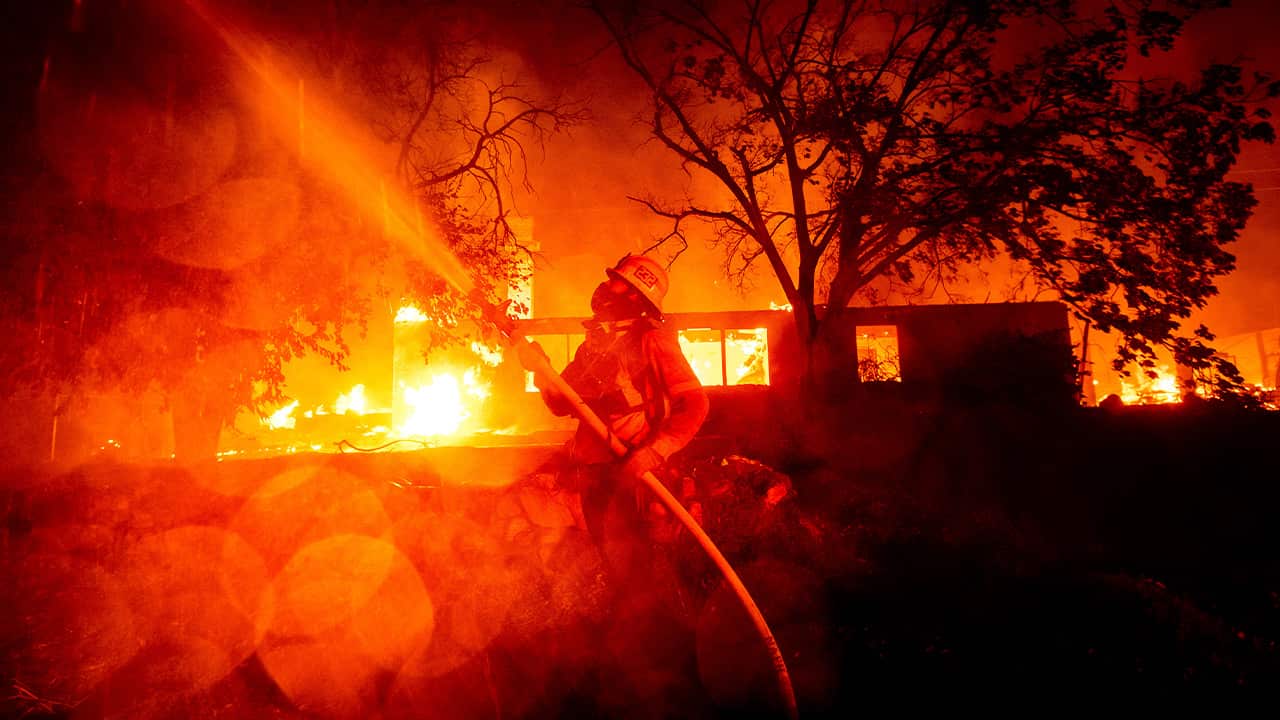 SIMI VALLEY — Strong winds fanned new Southern California wildfires on Thursday, burning homes and forcing residents to flee their homes in a repeat of the frightening scenario already faced by tens of thousands across the state.

Nearby Residents Had Little Time to Heed Evacuation Orders

Officials ordered about 30,000 people to evacuate, although some were being allowed back home Wednesday night as fire crews began to get a handle on the blaze.
Crews remained at the scene through the night to make sure embers would not rekindle more fires after an army of firefighters helped protect the hilltop Reagan museum, which sat like an island in a soot-black sea. There was no damage, library spokeswoman Melissa Giller said.
Nearby residents had little time to heed evacuation orders as the flames approached.

Elena Mishkanian was able to gather only some basics. Her son, Troy, 13, netted six pet fish from a tank and put them in pots.
“Fish have feelings!” he said when his sister Megan teased him about it.
Frightened horses screamed in a nearby barn as Beth Rivera used a garden hose to water down the edges of her home to keep embers from igniting dry grass and trees. Friends helped evacuate 11 horses.
The cause was not yet determined, but Southern California Edison filed a report with state regulators to say it began near its power lines. Electrical equipment has sparked some of California’s worst wildfires in recent years and prompted utilities to resort to precautionary power outages. SoCal Edison had not cut power in the area at the time this fire started.
As winds buffeted the state this week, utilities deliberately cut power to more than a million people to prevent high winds from damaging power lines and sparking wildfires.
Pacific Gas & Electric, which has staged three sweeping blackouts this week, restored power to hundreds of thousands of people Wednesday and expected to have it back for the others sometime Thursday.
In the Northern California city of Novato, at least 20 seniors with wheelchairs and walkers were essentially trapped , in the dark, in a low-income apartment complex during a two-day power shut-off. Firefighters battle a wildfire in Riverside, Calif. Thursday, Oct. 31, 2019. Santa Ana winds are expected to linger for a final day after driving more than a dozen wildfires through California. (AP Photo/Ringo H.W. Chiu)

The waves of days-long outages have been angrily condemned by state officials and consumers.
PG&E Corp. CEO Bill Johnson acknowledged hardships but said outages will be necessary in the future as seasonal fire threats increase.