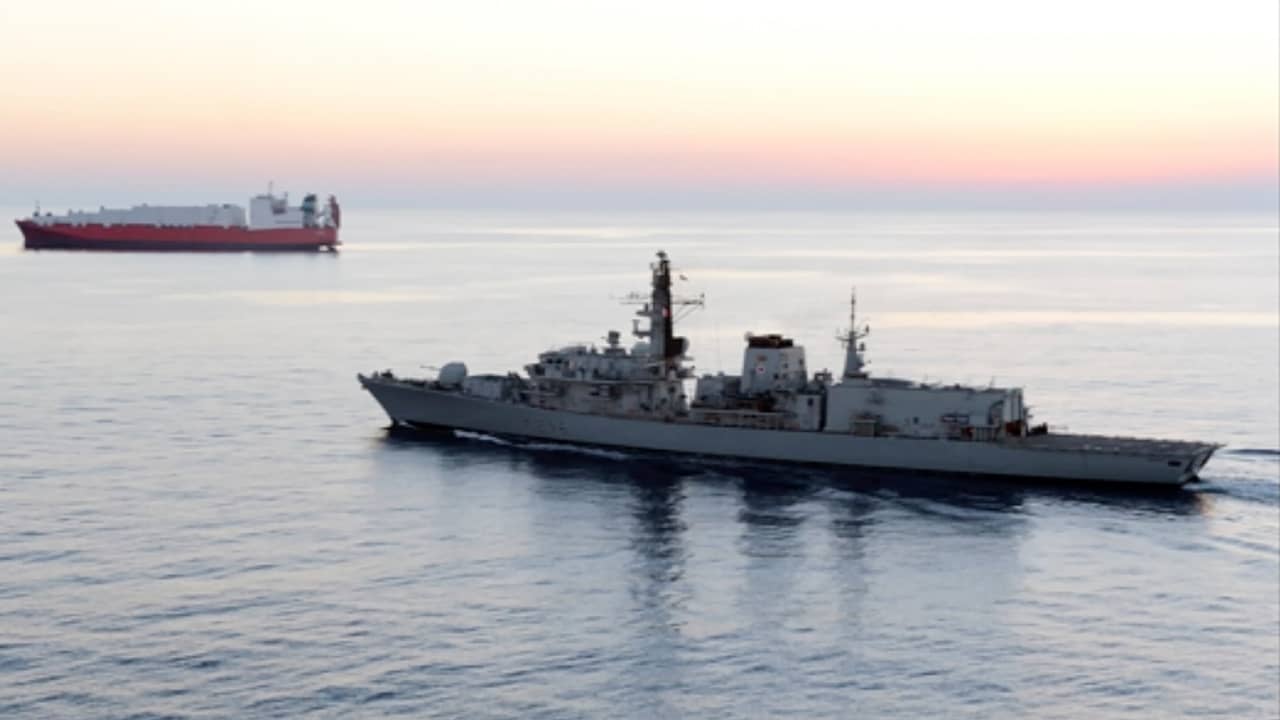 DUBAI, United Arab Emirates — The British navy said Thursday it stopped three Iranian paramilitary vessels from disrupting the passage of a British oil tanker through the Strait of Hormuz in a brief but tense standoff stemming from the U.K.’s role in seizing an Iranian supertanker a week earlier.
The incident highlights how fragile maritime security has become through one of the world’s most vital energy supply routes as the Trump administration carries out a campaign of maximum pressure on Iran.
Iran recently began breaching uranium enrichment limits set in its 2015 nuclear deal with world powers in response to President Donald Trump’s decision to pull the U.S. out of the accord a year ago. He also has re-imposed tough sanctions on Tehran’s oil exports, exacerbating an economic crisis that has sent its currency plummeting.
Russia and China, both signatories to the nuclear agreement along with Britain, France and Germany, have called for restraint. Kremlin spokesman Dmitry Peskov said “freedom of navigation should be ensured in the Persian Gulf and the Strait of Hormuz.”
Iran’s Revolutionary Guard denied any incident had occurred in the strait, saying if it had received orders to seize any ships it would have done so immediately. Iranian President Hassan Rouhani, however, had warned on Wednesday of repercussions for the seizure of the Iranian vessel by Britain’s Royal Marines in Gibraltar, off the southern coast of Spain a week ago.

U.S. Aircraft Was in Area at Time of Incident

The U.K. said in a statement that the British naval vessel HMS Montrose had been accompanying the commercial ship, British Heritage, through the narrow Strait of Hormuz, a crucial waterway for energy shipments . It said three Iranian vessels attempted “to impede” the ship’s passage.

20% of Oil Traded Worldwide Passes Through Strait of Hormuz

In recent months, the U.S. has sent thousands of additional troops, an aircraft carrier, B-52 bombers and advanced fighter jets to the region as tensions with Iran rise.
Washington has blamed Iran for a series of mysterious attacks on oil tankers in the region in the past two months — charges that Tehran denies. Tensions spiked further last month when Iran shot down an American military surveillance drone, which the U.S. says was in international airspace but Tehran says had violated Iranian airspace.
The regional waters where tensions have played out are of global importance. About 20% of all oil traded worldwide passes through the Strait of Hormuz from Middle Eastern producers. Iran has also used the shipping lanes for its own oil exports, but U.S. sanctions have curtailed Tehran’s ability to sell its crude internationally.


Related Story: Why This Narrow Strait Next to Iran Is So Critical to the World’s Oil Supply

U.S. Secretary of State Mike Pompeo has asked Mideast allies like Saudi Arabia and the United Arab Emirates in past weeks to contribute financially and militarily to a Trump administration proposal called the Sentinel Program — a coalition of nations working with the U.S. to preserve maritime security in the Persian Gulf and keep eyes on Iran.
Despite the latest incident, the overall threat level for non-British ships using the Strait of Hormuz has not changed significantly, said Jakob P. Larsen, head of maritime security for BIMCO, the largest international association representing ship owners.
“With what we’ve seen now I’m certain trade will continue in the region,” he said from Denmark. “Of course ship owners will take their precautions, and for British interests those would probably be a little more comprehensive.”

Maritime security risk firm Dryad Global described the British commercial vessel that had been at the center of the incident as an oil tanker operated by BP and registered in the Isle of Man. Lloyd’s List, a publication specializing in maritime affairs, said Shell had chartered the ship from BP.
Lloyd’s List said the vessel, the British Heritage, had diverted from its route to load its 140,000-ton cargo of crude at Basra, Iraq, as planned on July 4, the same day Iran’s tanker was intercepted off Gibraltar, a British overseas territory. It said the vessel instead headed to Saudi waters where it had remained for several days.
Since July 2, at least 20 British-flagged ships have sailed through the Strait of Hormuz, according to Lloyd’s List Intelligence data.
BP said the company’s “top priority is the safety and security of our crews and vessels” and thanked the Royal Navy for its support. The British multinational oil and gas firm declined to comment further.


Related Story: Five Things to Know About Iran's Breaches of the Nuclear Deal

Shell stopped short of confirming reports it had chartered the tanker, but told The Associated Press in a statement that “safety is our top priority.” A spokesman said the company was monitoring the situation closely and expects all vessels it charters to consider relevant Department for Transport guidance on shipping in the area.
The department had already raised its risk assessment to the highest level for maritime security in Iranian waterways, according to Lloyd’s List.
The semi-official Fars news agency carried a statement from the Iranian Revolutionary Guard’s navy on Thursday saying “there were no clashes with alien floats, especially British boats.”
Related Topics:Iranoil tankerPresident Hassan RouhaniStrait of HormuzTrump administrationvessels
Up Next