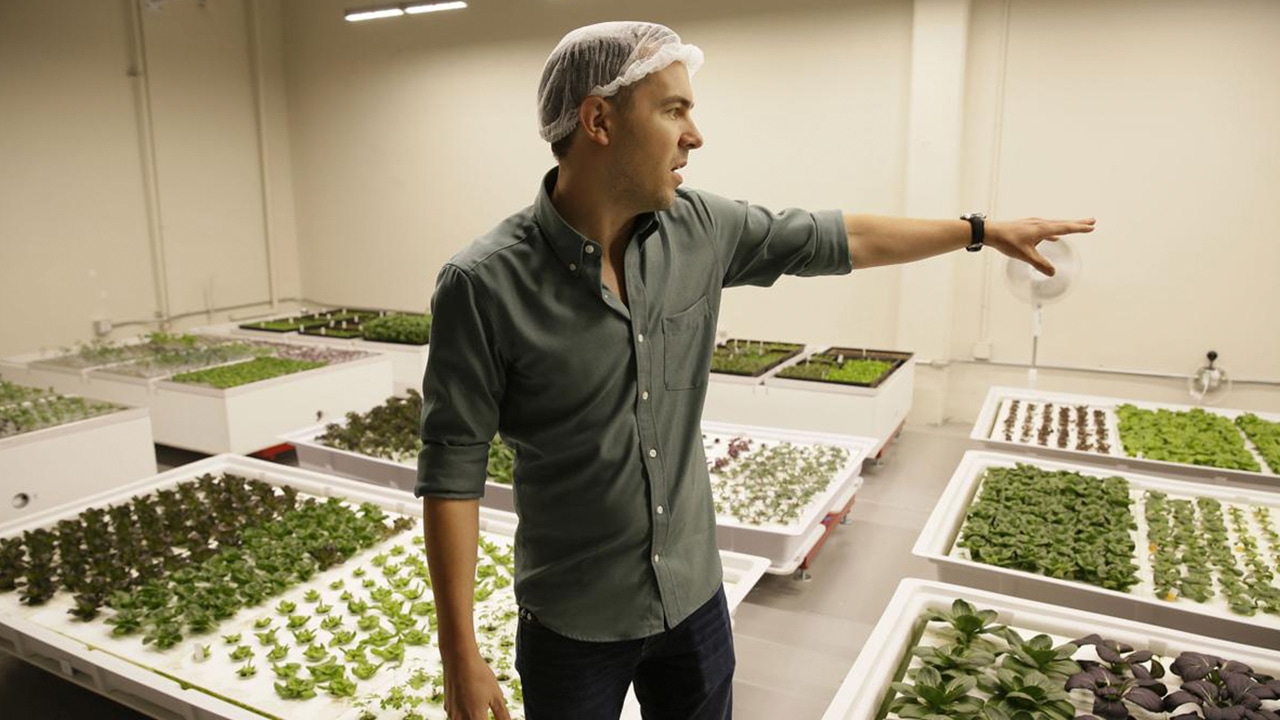 SAN CARLOS — Brandon Alexander would like to introduce you to Angus, the farmer of the future. He’s heavyset, weighing in at nearly 1,000 pounds, not to mention a bit slow. But he’s strong enough to hoist 800-pound pallets of maturing vegetables and can move them from place to place on his own.

Iron Ox planted its first robot farm in an 8,000-square-foot warehouse in San Carlos, California, a suburb located 25 miles south of San Francisco. Although no deals have been struck yet, Alexander says Iron Ox has been talking to San Francisco Bay area restaurants interested in buying its leafy vegetables and expects to begin selling to supermarkets next year.
The San Carlos warehouse is only a proving ground for Iron Ox’s long-term goals. It plans to set up robot farms in greenhouses that will rely mostly on natural sunlight instead of high-powered indoor lighting that sucks up expensive electricity. Initially, though, the company will sell its produce at a loss in order to remain competitive.
During the next few years, Iron Ox wants to open robot farms near metropolitan areas across the U.S. to serve up fresher produce to restaurants and supermarkets. Most of the vegetables and fruit consumed in the U.S. is grown in California, Arizona, Mexico and other nations. That means many people in U.S. cities are eating lettuce that’s nearly a week old by the time it’s delivered.
There are bigger stakes as well. The world’s population is expected to swell to 10 billion by 2050 from about 7.5 billion now, making it important to find ways to feed more people without further environmental impact, according to a report from the World Resources Institute .
Iron Ox, Alexander reasons, can be part of the solution if its system can make the leap from its small, laboratory-like setting to much larger greenhouses.

Heavy Lifting Is Done by Angus

The startup relies on a hydroponic system that conserves water and automation in place of humans who seem increasingly less interested in U.S. farming jobs that pay an average of $13.32 per hour, according to the U.S. Department of Agriculture. Nearly half of U.S. farmworkers planting and picking crops aren’t in the U.S. legally, based on a survey by the U.S. Department of Labor.


“If we can feed people using robots, what could be more impactful than that?” — Brandon Alexander, Iron Ox CEO
The heavy lifting on Iron Ox’s indoor farm is done by Angus, which rolls about the indoor farm on omnidirectional wheels. Its main job is to shuttle maturing produce to another, as-yet unnamed robot, which transfers plants from smaller growing pods to larger ones, using a mechanical arm whose joints are lubricated with “food-safe” grease.
It’s a tedious process to gently pick up each of the roughly 250 plants on each pallet and transfer them to their bigger pods, but the robot doesn’t seem to mind the work. Iron Ox still relies on people to clip its vegetables when they are ready for harvest, but Alexander says it is working on another robot that will eventually handle that job too.
Alexander formerly worked on robotics at Google X, but worked on drones, not indoor farms. While there, he met Jon Binney, Iron Ox’s co-founder and chief technology offer. The two men became friends and began to brainstorm about ways they might be able to use their engineering skills for the greater good.
“If we can feed people using robots, what could be more impactful than that?” Alexander says.
Related Topics:agricultureC-3POfarmerfutureIron Oxrobot
Up Next