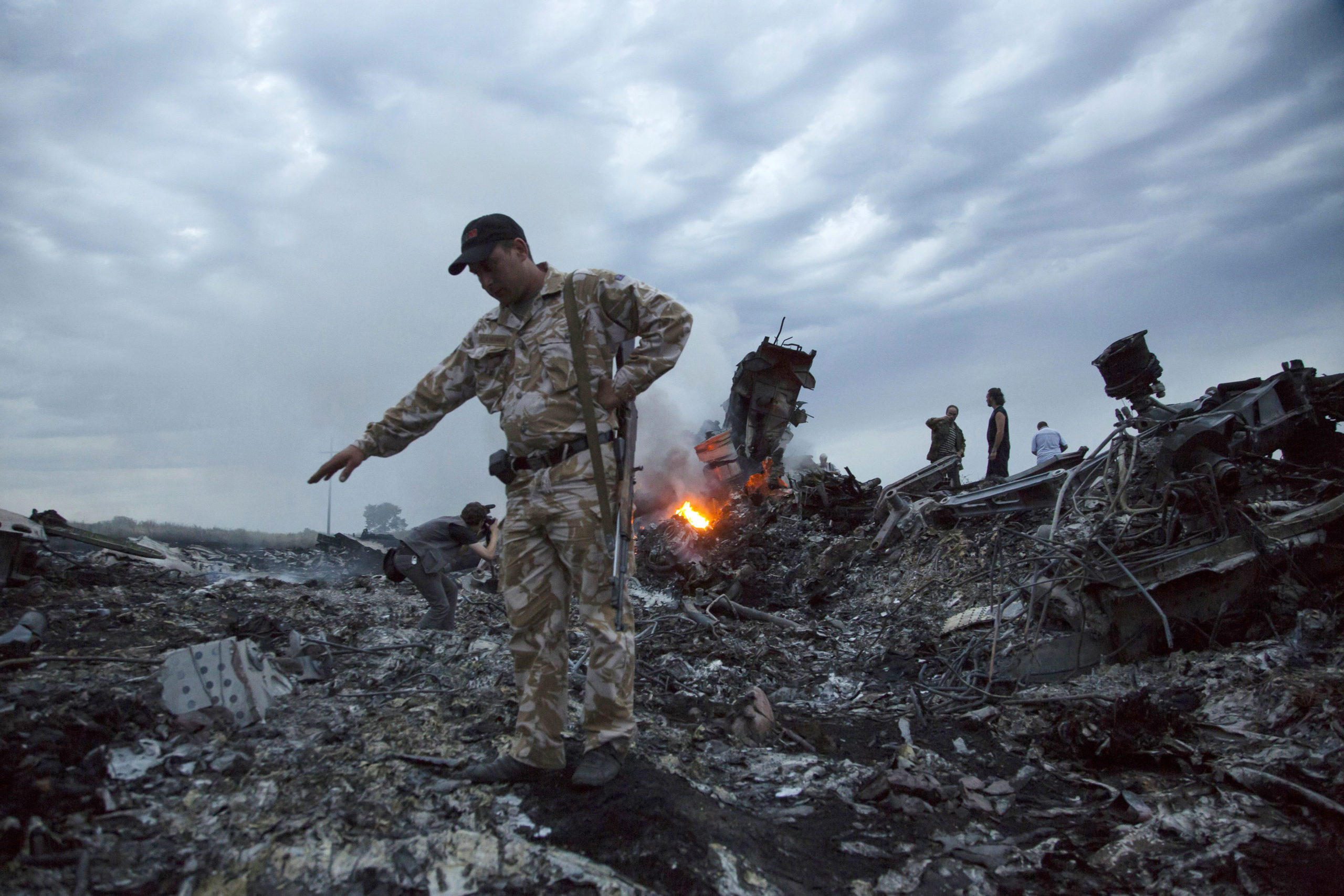 BUNNIK, Netherlands — The missile used to shoot down a Malaysia Airlines passenger jet over eastern Ukraine in 2014, killing all 298 aboard, belonged to a Russia-based military unit, an international team of investigators said Thursday after painstakingly studying video and photos of a military convoy.
The criminal investigation team “has concluded that the Buk Telar with which Flight MH17 was shot down is from the 53rd anti-aircraft missile brigade from Kursk in the Russian Federation,” said Wilbert Paulissen, head of the Netherlands’ National Crime Squad, referring to the missile system used.
It was the clearest link yet published by the investigators to the involvement of Russian military in the deadly surface-to-air missile strike on the Boeing 777, and it echoed findings published in 2016 by the Bellingcat investigative group.
Russia has always denied involvement in the downing of Flight 17, which was en route from Amsterdam to Kuala Lumpur, Malaysia, when it was blown out of the sky at 33,000 feet (about 10,000 meters) over war-ravaged eastern Ukraine on July 17, 2014. 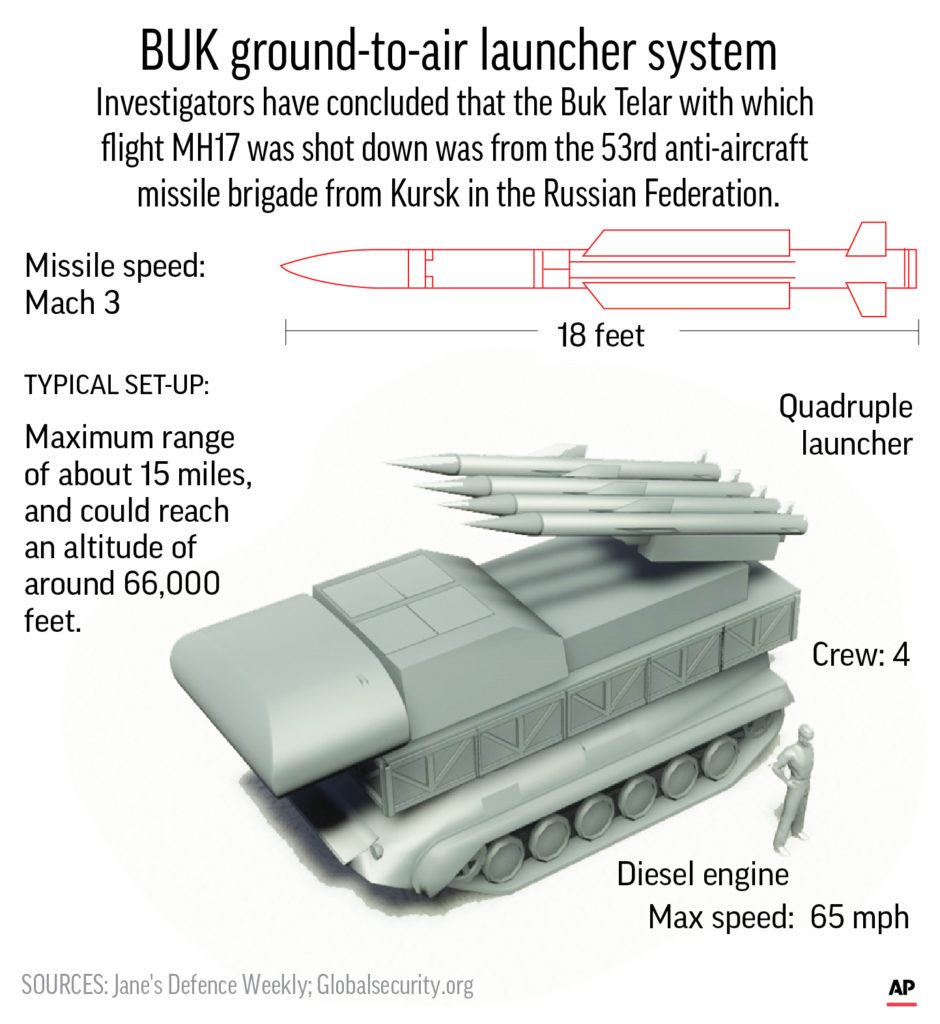 Bodies, debris and burning wreckage were strewn over a field of sunflowers near the rebel-held village of Hrabove in the Donetsk region of eastern Ukraine, about 40 kilometers (25 miles) from the Russian border, where fighting had been raging for months.
On Thursday, Russia criticized the Joint Investigation Team, or JIT, for relying on claims by Bellingcat.
“If the international investigative team is indeed interested in tracking down the real culprits of the MH17 catastrophe, its members would better rely on facts and witness testimony and not fakes produced by Bellingcat and Ukraine’s Security Service,” the Russian Defense Ministry said in a statement.

The Russian Foreign Ministry also criticized the investigators for allegedly ignoring evidence provided by Russia, including radar surveillance of the airspace at the time of the flight.
“In these circumstances, we have legitimate questions about the true underlying cause of the decision of the JIT to disclose the preliminary conclusion,” the Foreign Ministry statement said.
Prosecutors said they have presented their findings to Moscow and are seeking answers, but so far have not received a response.
The international team running the criminal investigation appealed for help from witnesses who can testify about the involvement of the Russian military’s 53rd anti-aircraft missile brigade.
Prosecutor Fred Westerbeke said the new conclusion raised new questions, “such as the question about how actively involved the brigade itself was in bringing down Flight MH17.”
Westerbeke said the JIT is not yet ready to identify suspects, but added: “I can say that we are now entering the … last phase of the investigation.”
Prosecutors said in 2016 that the plane was shot down by a Buk 9M38 missile fired from territory controlled by Russia-backed rebels, using a mobile launcher trucked in from Russia and hastily returned there.
Thursday’s presentation went a step further by identifying the exact unit allegedly involved in the transport. It showed a compilation of video and photos from social media tracing the missile brigade convoy’s journey in the weeks before the incident.
“All findings from this forensic investigation confirm the earlier conclusion of the JIT that Flight MH17 was shot down by 9M38 series missile,” said Jennifer Hurst of the Australian Federal Police.

Investigators displayed parts of the engine casing and exhaust system of a Buk 9M38 series missile recovered from eastern Ukraine and showed photos of its serial number, which they said demonstrated it was made in Moscow.
However, investigators said they could not yet say with certainty that it was the exact missile used to down MH17. They appealed for witnesses to come forward with more information about the missile and the role of the Russian military in transporting it.
In a statement, Australian Foreign Minister Julie Bishop said: “That a sophisticated weapon belonging to the Russian Army was dispatched and used to shoot down a civilian aircraft should be of grave international concern. We are discussing these findings with our partners and considering our options.”
Ultimately, any suspects identified and charged will be prosecuted in Dutch courts — if they can be arrested and brought to trial.
Of the 298 people killed, 196 were Dutch, 42 were Malaysian and 27 were Australian.
Ukrainian President Petro Poroshenko said in a Facebook post that he would “do everything possible to ensure that the actions of the Russian Federation as a state which supports terrorism get an appropriate assessment” in the International Court of Justice.