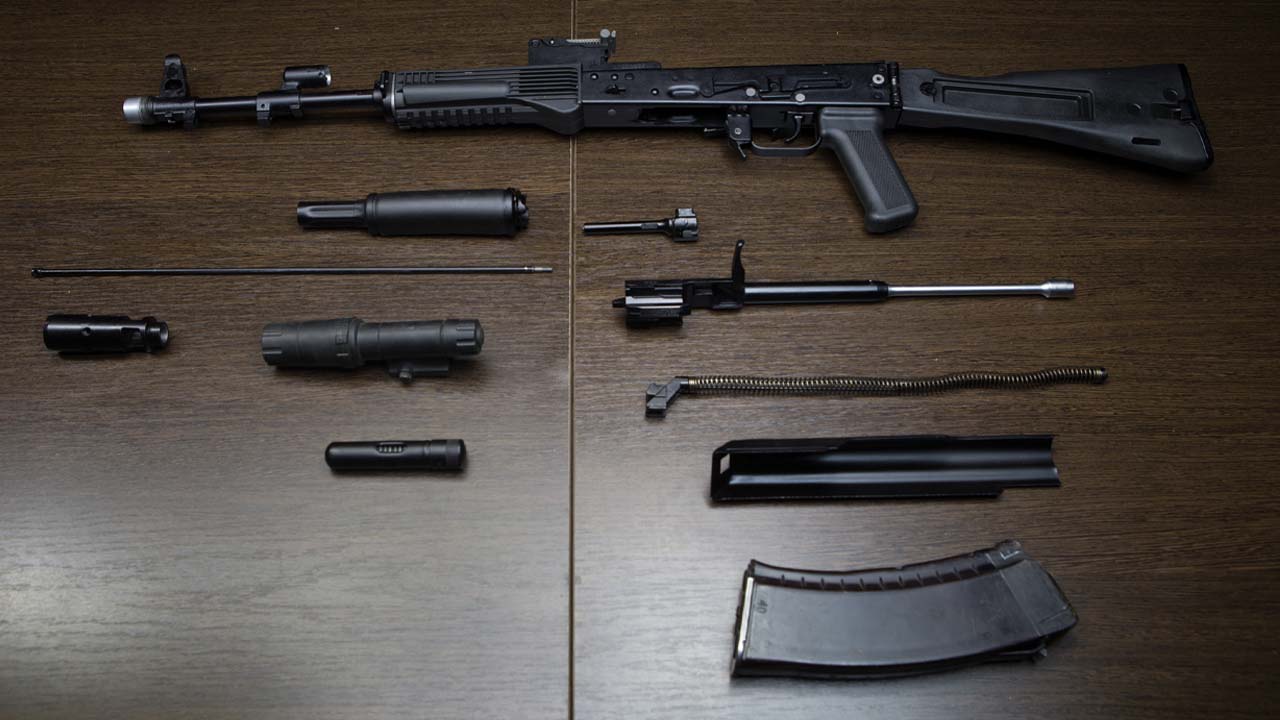 Authorities weren’t looking for a military assault rifle when they went to investigate a domestic assault case, but they found one.

It was in the garage of a Spanish-tiled home that police stumbled upon the AK-74. Its distinctively banana-shaped magazine — loaded with 20 rounds — was in a nearby storage container.

AK-74s are similar to their more famous cousin, the AK-47. Every two seconds, they shoot three bullets. Because of how rapidly they fire, civilians cannot legally possess them in the United States without a license.

One of the Thieves Associated With Fresno Bulldogs Gang

The weapon recovered by chance in 2019 was stolen eight years before from Fort Irwin, a base in the Mojave Desert where many soldiers trained before tours in Iraq and Afghanistan.

The three thieves had base access because they were military police — the soldiers who’d get the call when there was a break-in. To get into the supply warehouse known as Building 934 they cut through a fence, forced open one door and cut through another to enter the arms storage room.

One of them was affiliated with the Fresno Bulldogs street gang. Sgt. John Rodriguez said in an internal interview that he had joined the gang as a fifth grader but was no longer active. That was March 2011 — four months before the heist of 26 AK-74s and a sniper rifle.

After the theft, Rodriguez and Pfc. Harvey DelValle II took off nearly 300 miles to Fresno to unload their haul. At the home of an associate, the two soldiers began calling potential buyers.

This was how the weapons of war made their way onto the streets of Fresno. The guns were among at least 1,900 U.S. military firearms that an Associated Press investigation found were lost or stolen over the last decade.

Authorities around Fresno recovered some of them quickly.

Less than two weeks after the theft, agents tracked one down in the detached garage where a Bulldogs member, Moses Zapien, lived with his girlfriend.

The gun was on a shelf above their bed. Someone had tried to scratch off the serial number. The magazine, with bullets, was inserted.

Zapien told authorities he’d bought it to protect his home for what he considered the bargain price of $200. The garage was in a neighborhood that a century ago housed a railroad depot boom town, but was now gang territory.

Zapien said that he understood the source of the weapon was a Bulldogs member who worked at a military base and was “putting one back on the street for work for the gang.” The gang started in prison and its members have been accused of running guns and drugs, and operating networks of human trafficking and prostitution.

Another six AK-74s reached gang hands through an extended negotiation, according to what Rodriguez’s associate, Nathan Granados, told federal investigators.

About a week after the theft, Rodriguez and Granados met in the back room of a tattoo shop with three gang members who’d arrived in a white BMW SUV. Rodriguez brought one of the AK-74s inside for show and tell.

The discussion was promising enough that the two groups reconnected later and continued to negotiate. Around midnight, they drove to a home for the exchange. Rodriguez went to the backyard cellar and retrieved six guns. The Bulldogs handed over $1,400 and the deal was done.

How many remain in gang hands is unclear. Some of the 26 stolen guns have surfaced by happenstance. In June 2012, an insurance adjuster found one inside a vehicle that had been repossessed from a felon.

The three soldiers were convicted in military courts and sentenced to between six and 20 years in prison. At least 14 civilians were charged.

Though the case is now closed, nearly a decade after the theft at least nine AK-74s remain missing.

With COVID Tamed, It’s a ‘Grand Reopening’ in California