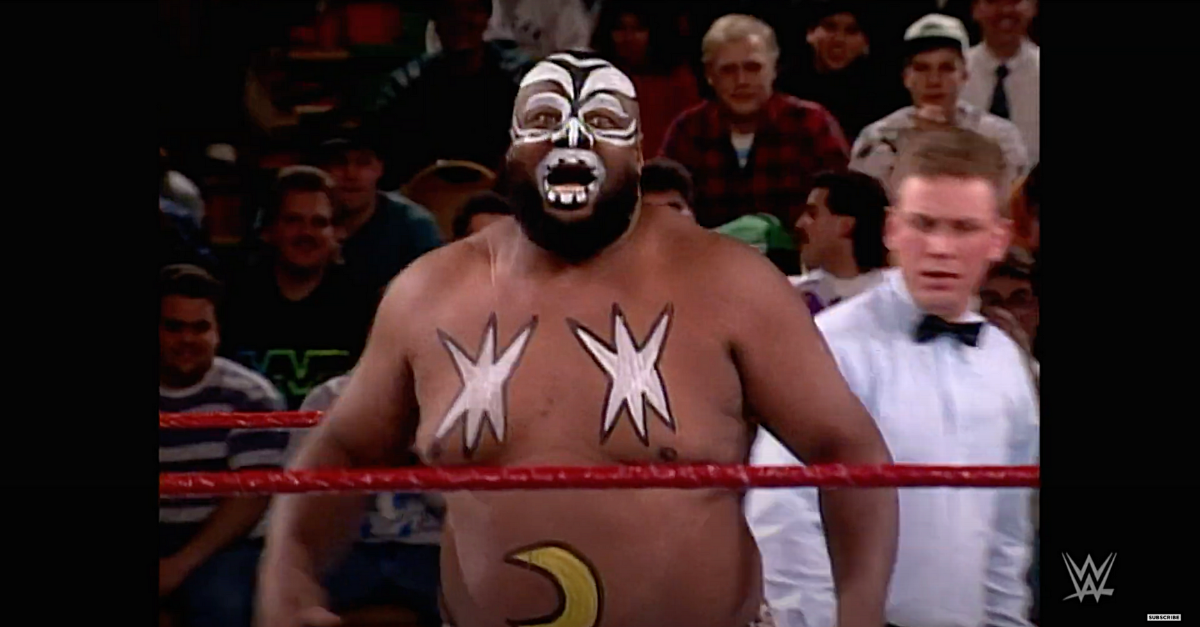 Kamala is certainly not a gimmick that would be allowed in today’s wrestling.

But fans believed that a 400-pound man from Mississippi was really a tribal warrior from Africa, with primitive wrestling skills and a superior ability to deal out pain.

For James Harris, who died Sunday at the age of 70, his fledgling career took off in 1982 when he adopted the “Kamala the Ugandan Giant” character.

Kamala wrestled all over the world, including Fresno when he was with the WWF.

A Character Inspired by National Geographic

In recent years, Harris talked about his origins in wrestling and how he developed one of the most memorable and financially successful gimmicks of the 1980s.

Harris started in 1978 as good-guy Sugar Bear Harris — a name inspired by the cereal mascot. He wrestled mostly in the south. While he was a big man, his in-ring ability was limited.

As he described on the Steve Austin Show podcast, Harris was recovering from an injury when he went backstage to a wrestling card in Memphis, one of wrestling’s hotbeds. Harris was seeking to borrow some gear lost in transit from England from a wrestler friend of his, and also to seek employment.

Jerry Lawler, the Memphis wrestling legend and part-owner of the promotion, spotted Harris backstage and saw potential when others saw wasted space. It wasn’t as the jovial Sugar Bear though that would make Harris a superstar.

Harris adopted a loin cloth, warpaint on the face and body, and a “ceremonial” shield and spear that were occasionally used as weapons when the referee wasn’t looking.

Kamala (sometimes spelled Kimala) was born, a name derived from a National Geographic article that Lawler had read. Uganda was an easy choice, the home of despot Idi Amin.

Videos aired of the giant Kamala roaming around the jungle, soon to step in a Memphis ring. The footage was shot in the backyard of Lawler’s business partner, Jerry Jarrett.

And a star was born. Harris altered his style as if he were a novice, albeit a giant novice. He would brutalize opponents with a powerful overhand chop, and a big splash — sometimes off the top rope.

Fans couldn’t get enough. The formula was the same no matter where Kamala went. He usually had a bad guy manager and a “handler” dressed in a mask, khakis, and a pith hat.  Kamala would destroy everyone in his path, causing lesser opponents to leave on a stretcher, often bloody. After watching Kamala destroy all the good guys, fans waited for their hero to finally take down the Ugandan monster.

The style worked in Memphis and other territories that Kamala worked — Mid-South (Louisiana/Oklahoma), World Class (Dallas), and Mid-Atlantic (Carolinas/Virginia).

It was in Mid-South that Kamala engaged in a feud with Andre the Giant. The two drew 21,000 to a Louisiana Superdome show in 1983. Both men took their feud to the WWF a year later.

Very sadden by the passing of Big Jim”Kamala”,like everyone else I would always ask if it was ok to take the leg drop for the finish as requested by the office.Jim would always say “let’s just keep making that money”,he was such a kind soul,RIP big brother,only love4U HH

From No Show to Main Event in Fresno

Kamala was set to wrestle in Fresno, on Nov. 25, 1984, but he quit a few weeks earlier. The Andre-Kamala main event played out around the country, with Andre scoring the win. By the Fresno show, their feud was over. He left the WWF for his next territory, with the philosophy that is better to wrestle in the main event than on the undercard.

In 1986, Kamala returned to the WWF. He finally found his way to Selland Arena. In November of that year, Kamala beat Billy Anderson — not a WWF regular, but a part-timer based out of Southern California — in four minutes with the splash, according to The History of the WWE.

In the usual pattern, it was setting Kamala up for main events against Hulk Hogan. The pair sold out the WWF’s top arenas — Madison Square Garden in New York City (twice), Maple Leaf Garden in Toronto (twice), and the Oakland Coliseum Arena.

Hogan and Kamala were the main event at Selland Arena on May 14, 1987, with the Hulkster going over. History repeated itself when Kamala quit later that year rather than lose to Hogan on Saturday Night’s Main Event, airing on NBC. Losing to Hogan on national TV meant that your time as a main eventer was over. Harris would rather move on to a money-spot in another territory than be a mid-carder with the WWF.

Kamala returned to the WWF for a third run five years later and wrestled twice more in Fresno in 1993. By then, the uncivilized savage character had run its course. Kamala became a good guy, accepting his mid-card status.

The whole concept of Kamala was a big black man terrorizing an area until the superhero (not always white in the case of the Junkyard Dog) made things right.

The concept of an African as a savage, with tribal drum music, face paint, and an inability to speak all fed into the stereotype.

Kamala eventually faded away in the mid-1990s, appearing sporadically in the WWE, usually as a one-night nostalgia bit.

Life after wrestling was rough for Harris. He lost a leg in 2012 due to complications from diabetes and high blood pressure. He also spoke in interviews about unfair treatment during his career, especially involving money.

Despite the politically incorrect nature of the character, Kamala’s image and style endured to any fan of 1980s wrestling.