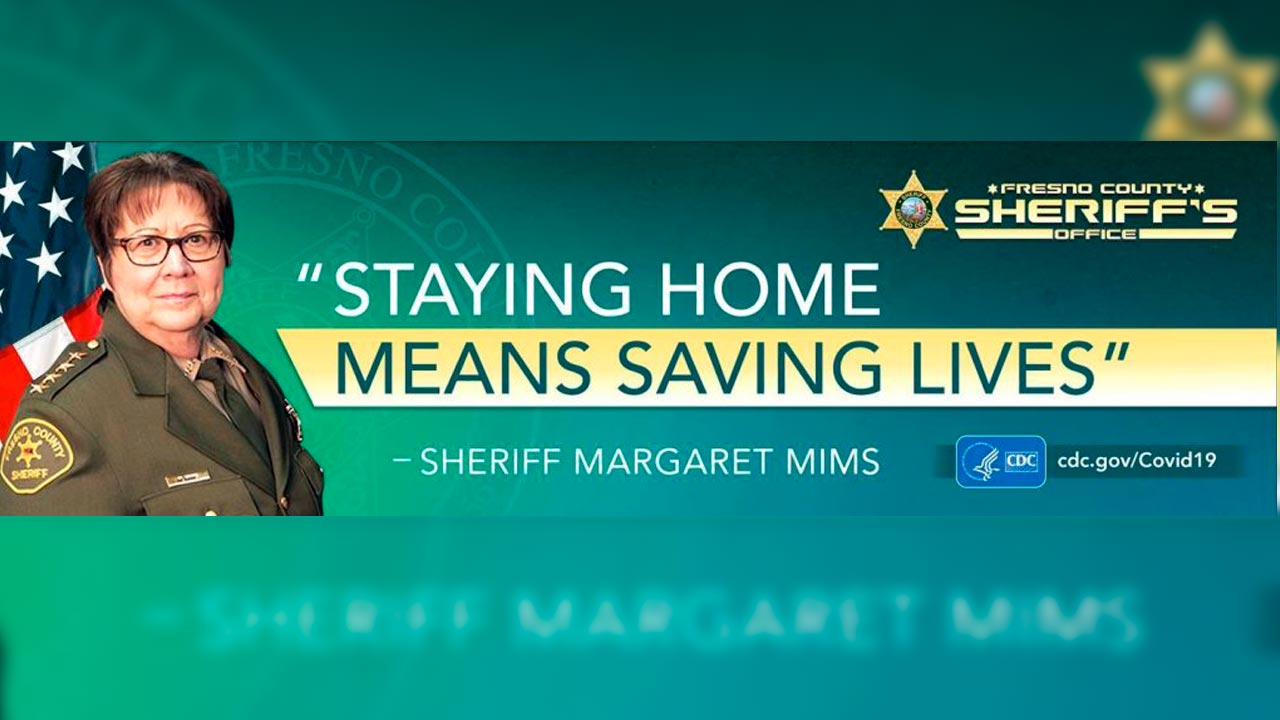 Sheriff Margaret Mims has a simple message during the COVID-19 pandemic: Stay home.

Thank you #outfrontmediaus for proving these as a public service! https://t.co/BioBvIKyeP

The message comes as Fresno-area officials brace for the Easter weekend and the possibility that people will ignore social-distancing guidelines and gather in large groups.

The Fresno County Sheriff’s Office teamed up with Outfront Media for the public service message.

“Outfront has done an incredible job turning these around in a short time and we thank them for their hard work,” spokesman Tony Botti said in a news release.

“The best vaccine we have right now is six feet of space,” Mims says.

Click on the video below to hear her entire message.

Will Sheriff Enforce Through Arrest?

Jean Rousseau, the county administrative officer, prefers that residents to shelter-in-place on their own volition.

While the county does not have a sheltering ordinance, the city of Fresno does. The city is considering fines for those not properly socially distancing.

“We don’t want to start fining people right out of the gate. We are hoping for voluntary compliance. We all have a responsibility, not only for ourselves, but for the community.” — Fresno County CAO Jean Rousseau

“We don’t want to start fining people right out of the gate. We are hoping for voluntary compliance, Rousseau said in a video chat with media on Tuesday. “We all have a responsibility, not only for ourselves, but for the community.”

Rousseau left open the possibility of fines or arrests if needed.

“The sheriff doesn’t want to be heavy-handed with it. She wants people to be responsible and do the right thing,” Rousseau said. “But if we have to, we will consider enforcement.”

Mims, in her video, also called for voluntary compliance but said fines are possible for “flagrant disregard” of social distancing.

@FresnoSheriff @MargaretMims is encouraging you to do your part to keep all of us healthy and safe from #COVID19 @OUTFRONTMEDIAUS is our great partner that has placed these billboards near Blackstone & McKinley, as well as Clovis & Shields in Fresno. pic.twitter.com/f61MYHW3K7

The exception for Fresno city parks is the coming Easter weekend.

Fresno Mayor Lee Brand announced on April 1 that all city parks will be closed Saturday and Sunday in the name of COVID-19 safety.

“In this COVID-19 environment, it would be very dangerous to keep them open,” Brand said.

The parks will reopen Monday.