Disney Parks Will Close Starting Saturday in Response to Pandemic 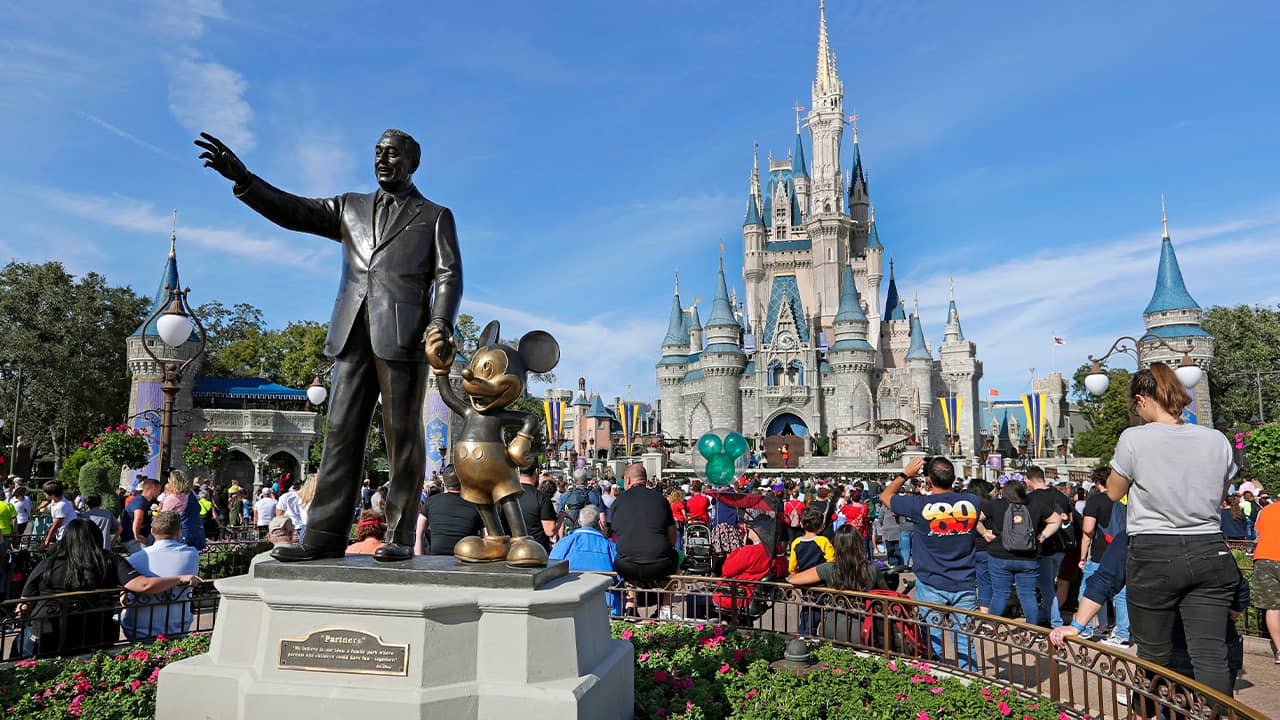 Disneyland announced that it’s shutting down its California theme parks on Saturday over concerns about the coronavirus outbreak.
Disneyland Park and Disney California Adventure Park will be closed through the end of the month though there have been no reported cases of the new virus, the company said in a statement Thursday.
It’s closing after reviewing guidelines by Gov. Gavin Newsom that limit gatherings of more than 250 people. Newsom had said earlier Thursday that the guidance did not yet apply to amusement parks.
The company said it will work with visitors who want to change or cancel their visits and will provide refunds on hotel bookings.
Disneyland hotels will remain open through Monday. The company said it will keep paying its cast members.
THIS IS A BREAKING NEWS UPDATE. AP’s earlier story is below.
Gov. Gavin Newsom said Thursday that sweeping guidance for Californians to avoid unnecessary gatherings to try to prevent the spread of the new coronavirus will likely extend beyond March.
The statewide guidance applies to sporting events, concerts and even smaller social gatherings in places where people can’t remain at least 6 feet (2 meters) apart. Major changes to daily life and business will ripple across the nation’s most populous state and the world’s fifth-largest economy.
The guidance so far does not apply to theme parks like Disneyland or casinos and card rooms. An extended restriction on large gatherings could further affect Major League Baseball, which just canceled spring training and postponed its season for at least two weeks. California is home to five professional baseball teams.
There are nuances when it comes to larger businesses such as amusement parks and theaters, Newsom said, and the state is in contact with them about how to put distance between people.
The guidance is not an official ban — like the Seattle metro area and San Francisco have instituted — and Newsom said California’s legal authority is limited when it comes to enforcement.
“I have all the expectation that it will be advanced and will be adopted. Invariably, what happens if it isn’t? I’m not concerned about that,” the Democratic governor said, adding that the state has ways it can step up enforcement if necessary.
Newsom said 21 more Californians tested positive for the COVID-19 virus Wednesday, bringing the total to 198 infections. Four people have died.

It Vastly Expands California’s Response to the Outbreak

Initially, some of the state’s testing kits were not complete because they lacked certain chemicals, Newsom said. All testing backlogs have since been eliminated, but the federal government needs to work closely with state and local governments to ensure complete tests are available, he said.
The California Department of Public Health advisory says events with 250 people or more should be postponed or canceled and gatherings of people at higher risk for severe illness from COVID-19 should be limited to no more than 10.
“Not holding that concert or community event can have cascading effects — saving dozens of lives and preserving critical health care resources that your family may need a month from now,” Newsom said in a statement.
The guidance was formalized in an executive order Thursday that eliminates a one-week waiting period and delays the tax filing deadline for people and businesses affected by the virus, allows state and local legislatures to hold meetings via teleconference and more. It also allows the state to commandeer property if necessary that could be used for quarantining and treating infected people or otherwise managing the outbreak.
It vastly expands California’s response to the outbreak as cities and others have instituted ever-increasing methods to curtail the spread of the virus. San Francisco, Oakland and Santa Clara County, which includes Silicon Valley, banned gatherings of 1,000 or more people.
Still, both houses of the state Legislature met as planned Thursday, allowing members of the public to watch, and leaders have announced no plans to halt sessions. In contrast, Los Angeles City Hall closed to non-city employees and Mayor Eric Garcetti halted all meetings and gatherings at city properties expected to attract more than 50 people.

The Los Angeles City Council announced it would hold just one public meeting a week instead of the usual three for the remainder of the month.
Corrections officials canceled daily visits at all state prisons until further notice. There are no suspected or confirmed cases of the virus at any lockups.
Meanwhile, officials in Oakland will continue the painstaking process of removing nearly 500 passengers remaining on the cruise ship hit by the virus, all of them non-California residents and foreigners. About 2,000 passengers have been moved off the Grand Princess and transported to military bases around the U.S. for a two-week quarantine.
More than 20 passengers have been diagnosed with the virus, as well as 19 crew members. After being forced to idle off the coast for days and then docking Monday, the ship was originally slated to leave Thursday, but California will allow it to remain through Sunday, Newsom said.
Princess Cruises announced a two-month pause of global operations on Thursday that will gradually sideline all 18 of its cruise ships.
Meanwhile, health officials defended a decision not to quarantine a senior living facility near Sacramento where a woman in her 90s died of the coronavirus, even as a dispute arose over whether Sacramento County officials were getting a sufficient number of kits to test for the virus.
Carlton Senior Living, which has 13 assisted living facilities in Northern California, said the Elk Grove resident died at a hospital Tuesday.

Related Topics:coronavirusDisneylandGov. Gavin Newsom
Up Next

Will Warm Weather Stop the Spread of New Virus? No One Really Knows