The head of a New York City-based philanthropic foundation tweeted a video of President Donald Trump talking about immigrants.

“.@realDonaldTrump on people asking for asylum “These aren’t people. These are animals,” Mark Elliott, the president of Economic Mobility Corporation, wrote.

The tweet, which was accompanied by a 47-second video of Trump, had 15,000 retweets by Monday morning after its Friday afternoon posting.

The video was from a May 16, 2018, White House roundtable on immigration. Among the president’s guests was Fresno County Sheriff Margaret Mims.

“There could be an MS-13 member I know about — if they don’t reach a certain threshold, I cannot tell ICE about it,” she said to the president.

That’s when Trump responded, in the video still housed on C-SPAN, calling MS-13 “animals.” Watch the video below at the 24:31 mark.

“I have learned that Trump’s comments were in response to a specific question about MS-13 members and not about asylum seekers more broadly. I have chosen to delete the tweet, but am copying it here. My apologies for not being more accurate,” Elliott wrote.

I have learned that Trump’s comments were in response to a specific question about MS-13 members and not about asylum seekers more broadly. I have chosen to delete the tweet, but am copying it here. My apologies for not being more accurate. pic.twitter.com/oDTdNvzSdq 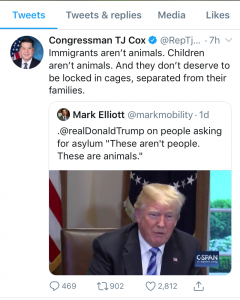 “Immigrants aren’t animals. Children aren’t animals. And they don’t deserve to be locked in cages, separated from their families,” Cox replied Saturday to Elliott on Twitter.

Asked about responding to a tweet that may have been taken out of context, a Cox spokesman wrote:

“The President has repeatedly demonized immigrants – separating children from their parents, locking them in cages, engaging in harsh and violent rhetoric, all while employing undocumented immigrants on his own properties. Ever since the President descended the escalator in Trump Tower in 2015 to call Mexicans rapists and criminals, there’s been no question what the President believes about this community that is the heart of the Central Valley.”

Also on Monday, Cox (or someone in his office) commented on the resignation of Homeland Security Secretary Kirstjen Nielsen via Twitter.

“Let’s be clear: This President’s hatred of immigrants is greater than any one member of his Cabinet. He announced his run for President by calling Mexican immigrants rapists & criminals, claimed that an American-born judge couldn’t fairly decide a case because of the color of his skin, and has questioned why the United States would open our arms to anyone from “s***hole countries.” Cox wrote in part across six separate tweets.

Mims said that she wanted to speak with Cox before judging him on his retweet.

“At this point, I’m going to give the congressman the benefit of the doubt until I talk to him about it. I will talk to him” she said.

“Posting the video as it had been posted is untruthful because it doesn’t show the whole context of the conversation. Whenever somebody does that, everything else they say is suspect,” Mims said.

On Sunday, the sheriff reposted a GV Wire story from August 2018, when California Attorney General Xavier Becerra wasn’t as critical of MS-13 as the president was. Becerra said this instead: “When you talk about maiming human life, scarring them to the point that you don’t recognize them, I don’t know if you would call them human beings.”

Related Story: Trump Critic Becerra on MS-13 Gang: Not Animals, But Not Human Either

Mims met with Trump along the border in Calexico last Friday (April 5).

“My purpose for being there was to discuss the impact on local communities. When things aren’t secure at our borders, we feel that up in our area,” she said.

“It is not a one-thing-fix-all when it comes to the border. We need border security, as well as comprehensive immigration reform,” she said.

Since her conversation with the president last May, Mims says things have improved regarding MS-13 in Fresno County.

“Once we started this and got the message that we are serious with federal prosecution, our violence out there related to MS-13 has greatly diminished,” she said.

@MargaretMims at the border in Calexico with @POTUS. Pic from WH Press Pool reporter @vmsalama of @WSJ pic.twitter.com/KeDOzwk3hz

This story has been updated with a comment from Cox’s office.