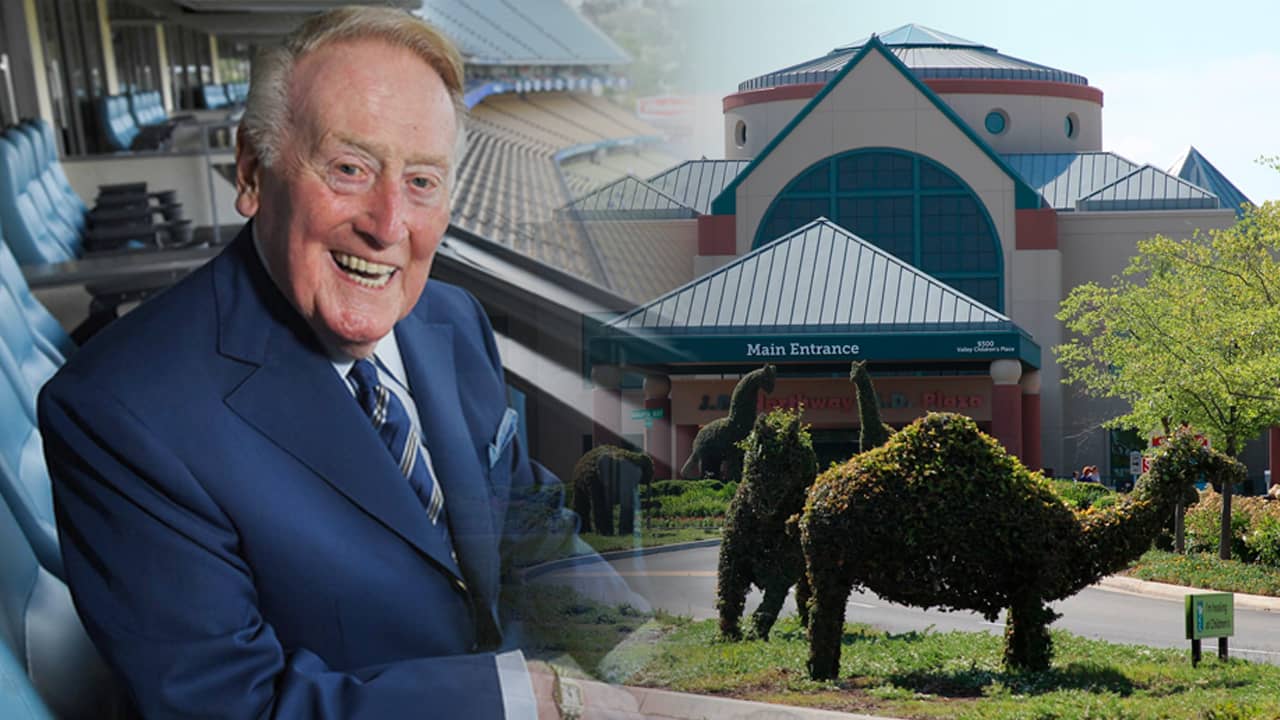 It may be one of the greatest chasms, dividing California if not the nation.
The bitter dispute has each side clinging to its values, its beliefs, its colors. There is no room for compromise.
And, there is only one man who can bridge the gap. One person, so universally loved and respected, even enemies heed his words.

Of course, I’m talking about the Giants-Dodgers rivalry and Vin Scully.
Now, Scully is lending his voice to a political cause.
Scully narrated a TV ad for Proposition 4, a statewide $1.5 billion bond to fund children’s hospitals, including Valley Children’s Hospital.
Given Scully’s longevity as voice of the Dodgers, it is hard to say if he ever publicly campaigned for a political cause before. People in the know can’t recall a previous time.
So, how did the legendary voice of baseball get involved?
He has a longstanding relationship with Children’s Hospital Los Angeles. The facility recently honored Scully with its Courage to Care award. He’s spent his retirement reading books to patients at CHLA.
“Two words that have always shaken my heart are ‘children’s hospital,’ ” CHLA quoted Scully in a news release. “Like every parent we worry a great deal … and then I visited that sacred place and saw the great spirit and dedication from those who work there.”
Will it work? GV Wire knows at least one voter who changed his mind upon hearing Scully’s support.

Watch the Campaign Ad With Scully

City Hall admits it failed to make sure that the Fresno county clerk printed the correct ballot language on Measure P.
That is the 3/8 of a cent sales tax measure benefiting parks voters will decide Nov. 6.
“In ten years at City Hall, I’ve never seen such a mess, and we’ve been through a lot of messes,” Mayor Lee Brand said.
On Aug. 9, council put forward the ballot measure after receiving a petition with 35,000 signatures to advance the initiative.
The city clerk’s office transmitted to the county clerk — who administers elections — draft language of what voters see on the ballot instead of the final, longer version that the council technically approved.
Councilman Steve Brandau, although a Measure P opponent, said that the city had an obligation to correct the mistake. He’s of the opinion that the Yes on P campaign, along with the county clerk’s office, should share the blame, as they all missed making the correction during a 10-day review period.
Ultimately, the council voted 4-3 to send postcards with the corrected language to city voters. The agreement calls for the Yes on P campaign to waive the right to take legal action.
The council approved the fix despite not knowing the final costs to mail the postcards. City clerk Yvonne Clerk quoted $85,000 if a postcard was sent to all registered voters. It will be less, however, because one card will go to each household instead.
Brandau, Esmeralda Soria, Oliver Baines, and Luis Chavez voted in favor. Yes on M indemnifying the city was a factor in Chavez’s vote.
Garry Bredefeld, Paul Caprioglio, and Clint Olivier voted against. Bredefeld and Olivier said that some voters may construe the postcard as an endorsement, even though the notice explicitly says it is not.
“This council is attempting to do the right thing and that is to mitigate the issue to ensure everyone is clear on what the language was supposed to be,” Soria said.

The council also voted to amend an agreement with the Orange Avenue Disposal Company dump, increasing what the city will pay the company.
The city and OAD signed the initial contract in 2004 for disposing municipal solid waste, as well as waste from construction sites. The new proposed agreement cites increases in fuel prices, minimum wage, and other state environmental laws. The new agreement calls for the city to pay $740,000 more per year.
And, the plan is to pass the cost to residential users, at 30 cents a month. That is pending on a Proposition 218 election. In a Prop. 218 case, the city sends notices of the proposed increase, with an attached protest card. If a majority of those protest cards are returned, the price increase fails.
The council approved the amendment 6-1, with Bredefeld casting the lone no vote.
Olivier called the hike the best solution in a difficult situation.

The KMJ Measure P Debate: Both Sides Square Off