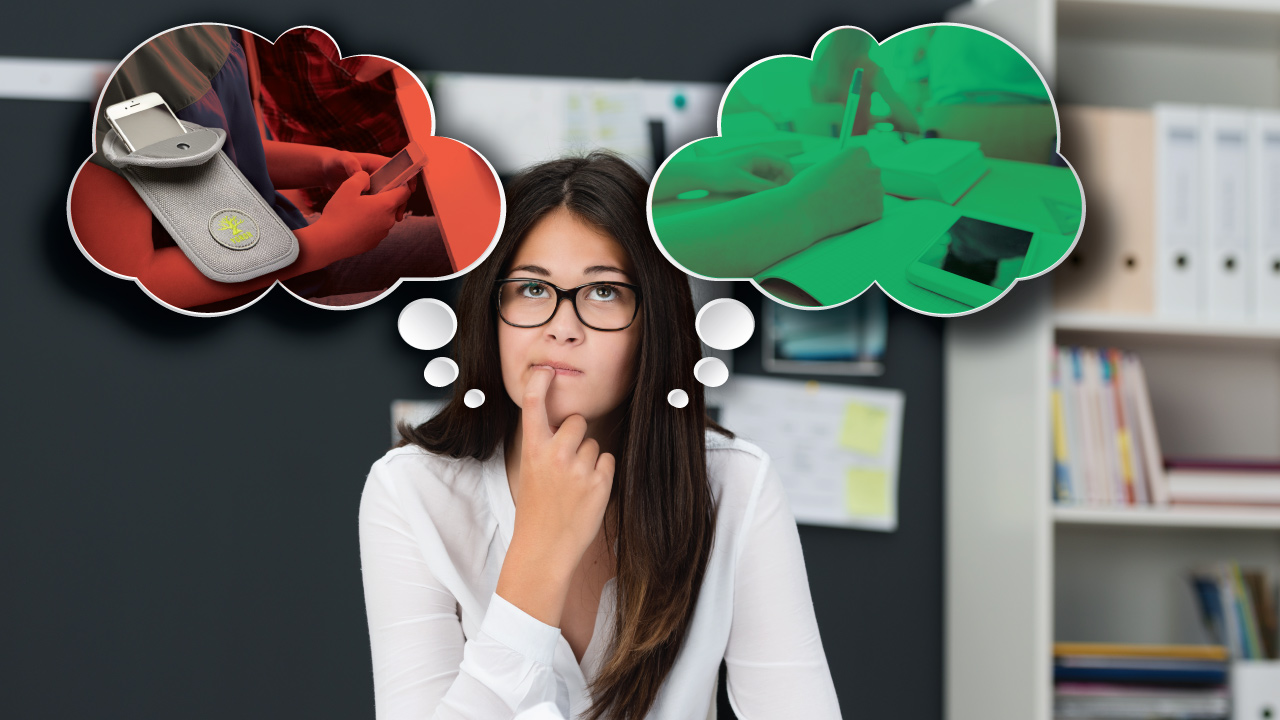 Selma High students can choose whether their cellphones go in a pouch or not. (GV Wire/Paul Marshall)
Share with friends

Bullard High School in northwest Fresno isn’t the only Valley school with a new cellphone rule this school year. But unlike their counterparts at Bullard, Selma High School’s 1,800 students can choose whether they hang onto their cellphone or have to put it in a storage pouch.

Under Selma High’s new “acceptable use” policy, students can keep their cellphones or other devices with them in class, so long as they are switched off, out of sight, and not causing a distraction, Principal Scott Pickle told GV Wire.

If a student is caught using a cellphone during class, the first step is a warning from the classroom teacher to put it away. If the cellphone continues to distract, the teacher then pulls the student aside for a quick conference about stowing the cellphone. On the third notice, the student is given a neoprene pouch with a magnetic lock — Pickle says it’s similar to the inventory control mechanism some stores attach to clothing or other items — to store the phone. The pouch is unlocked after class ends.

Those who refuse to pouch their phone are sent to the Bear Center, the school’s intervention center, and their parents will be notified, the principal said.

Selma students have been back at school barely a week, and so far they’ve been accepting of the new policy — and they’re aware of the controversy at Bullard High over the new policy of mandatory locking pouches for cellphones, Pickle said.

Pickle said Selma’s policy, which applies to devices other than cellphones, is a “good middle ground that can help to teach the students the best way to interact.”

The education that students get at school goes beyond learning algebra and American history. Students are also learning about the consequences of their decisions, including when it’s appropriate to be on their smartphone — and when it’s not.

“And hopefully we can get that level of learning for that student, that when they go on to the real world, they understand that, well, I can’t have my phone on in a job interview or at work,” Pickle said. “I can’t sit there and scroll through Twitter while I’m at work because that’s going to get me some sort of consequence. So that’s what digital citizenship is all about.”

Selma High students and parents were notified of the new policy prior to the start of the school year, and then again at the start-of-school student assemblies last week, the principal said.

“I said, everybody, raise your hand if your parents told you this morning, ‘Hey, have a wonderful day, go misbehave.’  And of course, all the kids kind of chuckled. And I said, that’s right. Because no parent has ever said that to any student. ‘Go to school and misbehave, go ahead. Go to school and misuse your phone, go ahead.’

“No parent ever sends their child to school to misbehave or to violate school rules. They want you to come here to be successful. We’re giving you an environment where you can be successful — make the right choice. That’s what we’re asking. And really, it’s on the students at this point.”

Pickle, who became Selma High’s principal last December, said he began developing the new policy by vetting it with teachers during the spring semester and then planning for the rollout in the new school year.

Why now? Ten years ago cellphones weren’t as much of an issue because for many students the devices and service plans were unaffordable. But as prices and costs have dropped, cellphones have become ubiquitous, Pickle said.

“We find that 99.9% of our students have these devices and they have plans that afford them unlimited data and streaming. So a student can be on their phone and be listening to music the whole time all day long. And we didn’t see that years ago.

“And I know we would like to blame everything that we come out of on the pandemic. We like to blame that. But I don’t want to say that. I would rather say that it’s an advancement in our digital culture, and these devices have become part of our world. And we as schools have not been really good about changing with the digital times.”

Pickle said school officials are making it clear to students that cellphones or other devices can be a distraction that will keep them from learning, which is the reason they are in school. The message from teachers to students is about eliminating distractions, not eliminating cellphones, he said.

So far there’s been no pushback from parents, he said: “I’ve been at this a long time, and I’ve never met a parent that said, ‘Oh, it’s OK for my son or daughter to have their phone on in class.’ They completely understand that it’s a tool, just like we do. They agree that we are acknowledging that it’s a great tool, and it’s a great learning resource even. But we just have to teach appropriate use.”

Related Topics:cellphoneFeaturedSelma High
Up Next