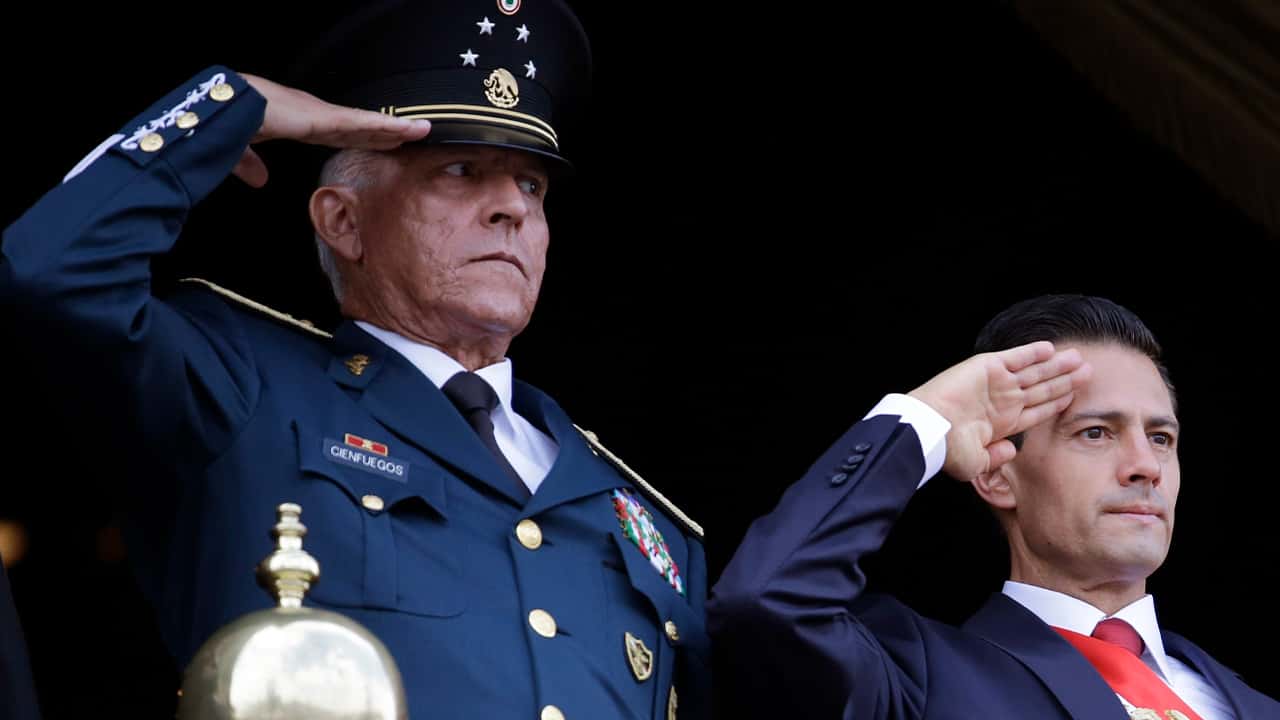 LOS ANGELES — Mexico’s former defense secretary helped a cartel smuggle thousands of kilograms of cocaine, heroin, methamphetamine and marijuana into the United States in exchange for bribes, according to court documents unsealed Friday.

Thousands of intercepted BlackBerry messages show the general ensured military operations were not conducted against the cartel, and that operations were initiated against rivals, according to prosecutors. Cienfuegos allegedly introduced cartel leaders to other corrupt Mexican officials.

Cienfuegos — also known as “El Padrino,” or “The Godfather,” according to the indictment — is accused of alerting cartel leaders to a U.S. law enforcement investigation into its operations and the use of cooperating witnesses and informants, which resulted in the murder of a member of the cartel that leaders incorrectly believed was assisting U.S. law enforcement authorities.

Intercepted communications between Cienfuegos and a senior cartel leader discussed the general’s historical assistance to another drug trafficking organization, as well as communications in which the defendant is identified by name, title and photograph as the Mexican government official assisting the H-2 cartel, authorities said.

Mexico authorities don’t identify any drug cartel as H-2, which, according to U.S. officials, was led by Juan Francisco Patrón Sánchez. Instead, Mexican officials alleged Patrón Sánchez was a regional leader of the Beltrán Leyva drug cartel. He was killed in 2017 in a shootout with Mexican marines. Federal Prosecutors Will Ask That Cienfuegos Be Denied Bail, Saying He Is a Major Flight Risk

In Mexico, the cartel is accused of trafficking hundreds of firearms and committing “countless acts of horrific violence, including torture and murder, in order to protect against challenges from rival drug trafficking organizations, fight for territory and silence those who would cooperate with law enforcement.”

Cienfuegos was indicted by a grand jury in the Eastern District of New York on Aug. 14, 2019, on charges of conspiracy to participate in international distribution of heroin, cocaine, methamphetamine and marijuana and money laundering. He could face a mandatory sentence of at least 10 years in prison if convicted on the conspiracy charges alone.

Federal prosecutors will ask that Cienfuegos be denied bail, saying he is a major flight risk. They say he last visited the United States in March 2019, and if he were captured in Mexico, extradition to the U.S. could take years.

“While the United States and Mexico have an extradition treaty, it will be extremely difficult to apprehend the defendant in Mexico if the H-2 Cartel and powerful former government officials shield him,” Seth DuCharme, acting U.S. attorney for the Eastern District of New York, wrote the court.

The Drug Enforcement Administration, which issued the arrest warrant, declined to comment .

Cienfuegos was scheduled to make an initial appearance later Friday in federal court in Los Angeles. He was expected to be transferred to New York, where his case is being handled.

The former defense secretary was to be represented at the hearing by public defender Ashley Mahmoudian, who did not immediately respond to a request for comment. His personal attorney Rafael Heredia was traveling from Mexico to be there.

Cienfuegos was arrested Thursday as he arrived at Los Angeles International Airport. A senior Mexican official, who spoke on the condition of anonymity because he wasn’t authorized to give details of the case, said Cienfuegos was arrested with family members who were released and he was taken to the Metropolitan Detention Center. He was expected to appear in court via video from the detention facility.

Cienfuegos is the highest-ranking former Cabinet official arrested since top Mexican security official Genaro Garcia Luna was taken into custody in Texas in 2019. Garcia Luna, who served under former President Felipe Calderón, has pleaded not guilty to drug trafficking charges.

The arrest of Cienfuegos is a tough blow for Mexico, where the army and navy are some of the few remaining respected public institutions.

Mexico’s current president, Andres Manuel López Obrador, has vowed to go after corruption and lawbreaking under past administrations, but he has relied more heavily on the army — and given it more tasks, ranging from building infrastructure projects to distributing medical supplies — than any other president in recent history.

López Obrador sought Friday to reassure the country that he still had faith in the armed forces as “pillars of the Mexican state.” He has invested more responsibility in military leaders than any president in recent history. While he said the arrest was unfortunate, it gave him another opportunity to repeat his refrain that corruption is at the root of Mexico’s most serious problems.

López Obrador draws a bold line between the degradation of public institutions that occurred under his predecessors and the transformation he says he is undertaking. For many Mexicans however, the military has long been seen as the last defense against the cartels, raising the question of who can be trusted now. Mexico’s defense ministry had not commented on the arrest.