If Voters Raise Taxes on Corporate Landlords, Will Small Biz Foot the Bill? 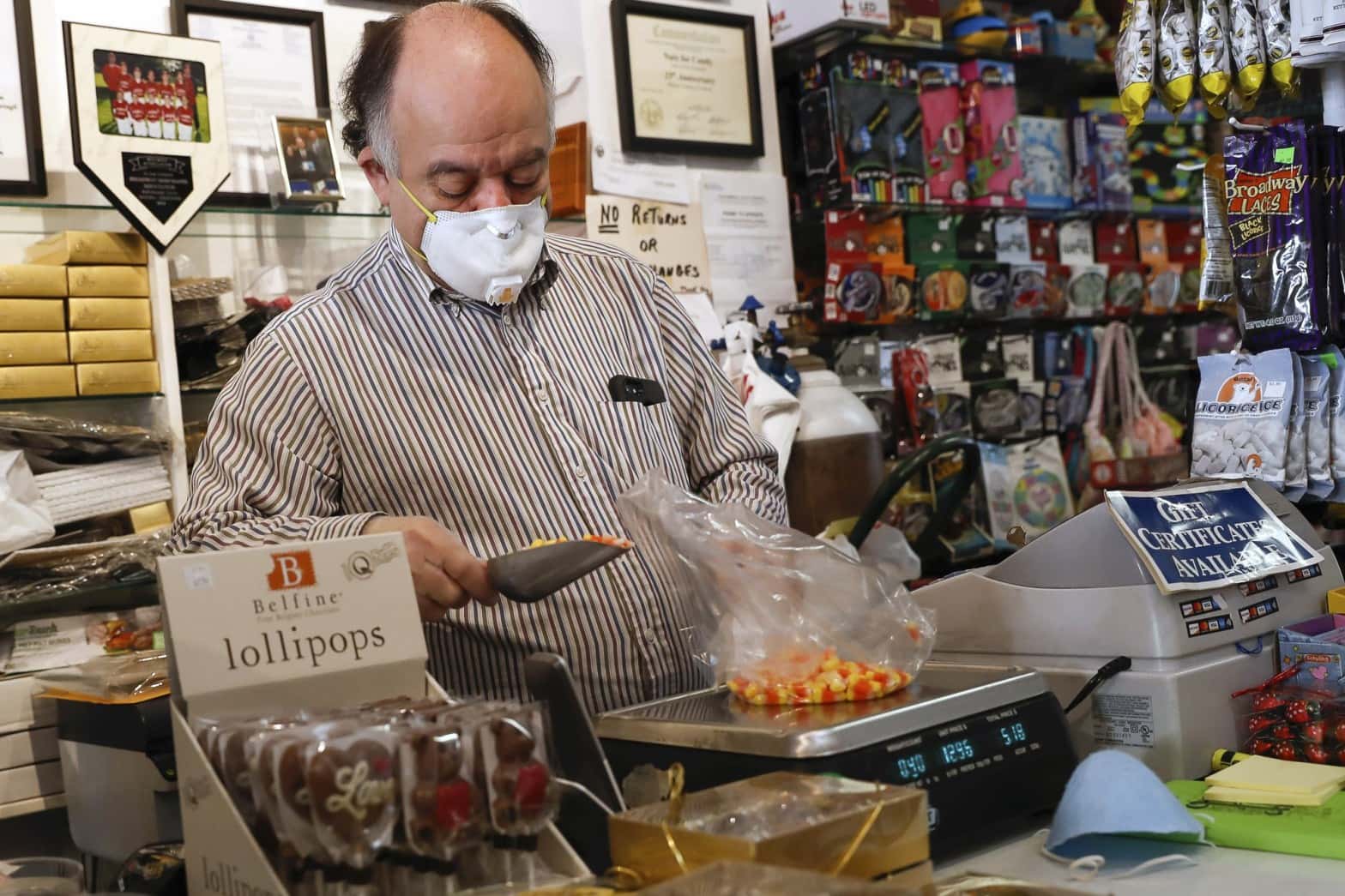 When supporters of a November property tax ballot measure talk about soaking the state’s faceless corporate giants and its wealthiest landlords, they are not talking about people like John Kevranian.

The co-owner of Nuts for Candy & Toys in Burlingame, Kevranian and his wife have operated this mainstay of the Bay Area city’s downtown strip for more than a quarter-century. He rents the shop. And he’s exactly the type of voter that backers of Proposition 15 — which would raise property taxes on many commercial and industrial property owners — had hoped not to goad.

If Prop. 15 passes in November, he said, he is convinced his landlord will simply pass the higher cost along to him — and then “I would close my doors.”

The “Yes on 15” team has marshalled a small army of high-caliber economists, including a Nobel Laureate, to help make its case: politically sympathetic small business owners need not lose sleep over this year’s “split roll” initiative.

But many business owners and commercial real estate experts warn that the hotly contested ballot measure contains a glaring hole — and that many mom-and-pop shops across California are going to fall in.

On this question, the Yes and No camps are “talking past each other,” said Adam Sachs, a business transactions lawyer in the Bay Area. “In the long term, the tax hits landlords. But in the short term, it’s on tenants.”

In a statement, Yes on 15 spokesperson Alex Stack pointed to some of the other exemptions and benefits in the measure that are aimed to assuage small businesses’ concerns:

“Prop. 15 cuts taxes for small businesses, exempts those whose property is worth $3 million or less, and allows for an extended phase-in period. Prop. 15 provides the support, flexibility, and investment that small businesses need going forward.”

Ever since voters in 1978 passed Proposition 13, placing a cap on how much property taxes can increase year-over-year, politicians have been loath to mess with it.

But teachers’ unions and other Prop. 15 backers created a savvy workaround to minimize backlash: Propose to repeal those protections only for businesses over a certain size. If Prop. 15 passes, any commercial or industrial property owner with more than $3 million of California real estate would have to pay taxes based on the current market value of the property, rather than the original, likely much lower, purchase price. Smaller business owners would be exempt.

The idea: Homeowners are fans of Prop. 13, but voters here usually are more than willing to stick it to the 1%.

But that argument only works if voters really believe that just the fat cats will take a financial hit.

In a recent ad, the “No on 15” campaign — principally funded by large businesses, corporate landlords and low tax advocacy groups — warned that “small businesses that are already struggling will be hit with higher rents and tax bills.”

But candy and toy store owner Kevranian, also president of his downtown business improvement district, said he and his peers are right to feel anxious. His lease obligates him to pay rent, along with an insurance premium, maintenance costs and the entirety of his share of the building’s property tax, he said.

These types of rental agreements, known as “triple net leases,” are relatively common, said Norma J. Williams, a commercial real estate lawyer in Los Angeles. And while there are variations on this form, “most (commercial) leases of whatever type have landlords passing through all or some portion of their taxes to tenants,” she said.

Business tenants with these leases always face the risk of their landlord selling the building, triggering a reassessment of the property and a tax hike that is shunted off to the renter. But if Prop. 15 passes, thousands of buildings would be reassessed simultaneously — turning that risk into a certainty. Prop. 15 was written to target big business and corporate property owners. But some small businesses worry that, as renters, their landlords will just pass the higher taxes along. File photo by Anne Wernikoff for CalMatters

For tenants halfway through a 10-year lease obligating them to foot any increase in the property tax bill, what we’re talking about is “probably four years of intense pain or even, ‘I can’t pay this,’“ said Stephen Ledoux, a real estate attorney who represents many restaurant renters. “And then it’s up to the landlord to decide, ‘I have a tenant who can’t pay rent; do I want to work with them or terminate their lease?’”

Ledoux said it’s impossible to say how many businesses might fall into this special category. He estimated “thousands and thousands.”

“This is a big issue,” he said. “I don’t know how big it is in the grand scheme of Prop. 15, but for these people who will be affected…those are hard conversations.”

A study commissioned by the Yes on 15 campaign in July estimated that 92% of all the new revenue raised by the measure would come from 10.5% of commercial and industrial properties.

Kevranian said his tax bill is about $2,500 per year. If the building were reassessed to its current market value, he predicts his share would increase seven-fold to roughly $17,500 — an estimate CalMatters was unable to verify.

“They’re trying to tackle the major corporations like Disneyland and Chevron and that’s fine,” he said. And while his lease ends in November, many of his neighbors may be stuck in leases obligating full property tax payments for years. Supporters of Prop. 15 are “not small business owners, they’re not landlords, they don’t understand the process,” he said. “They just see numbers.”

Last week the research consulting firm Beacon Economics released a report, funded by the Silicon Valley Community Foundation, that analyzed 12,000 commercial property transactions across the state’s major urban areas. It found that market rents are best predicted by a number of variables like location, size, vacancy rates and local costs like wages.

Missing from that list: a company’s tax bill. “The rents are not driven by the property taxes paid, but by other factors,” the report found.

But Chris Thornberg, founder of Beacon Economics, said the study did not look “lease by lease” to see what became of businesses that pay a unit’s property tax bill as a condition of the rent. “That’s a separate conversation,” he said.

The No on 15 camp was quick to slam the study’s methodology. “The Beacon Economics study cannot quantify the true impact of Prop 15 on small businesses because the data necessary to do so does not exist,” spokesperson Michael Bustamante in a press release.

Thornberg joins 19 other bigwig economists who penned a letter earlier this month in defense of the measure.

If voters pass Prop. 15, the letter reads, “standard economic theory says that these kinds of impacts reduce windfall profits; they do not lead to price increases.”

“The claim that (landlords) will pass this on through prices — that’s just not the way that this works,” said Jesse Rothstein, a UC Berkeley labor economist and one of the letter’s lead authors.

Signatories on the list also include Economic Nobel Laureate Joseph Stiglitz, deputy Treasury Secretary of the Clinton administration Brad DeLong and both Saez and his frequent collaborator Gabriel Zucman.

There is one caveat, Saez said. If taxes increase and landlords try to pass along the bulk of the cost, property owners and their tenants will have to negotiate new terms, new leases will be struck after old ones expire, and some businesses will need to relocate in the face of obstinate landlords.

“That could take some time to play out,” he said.

Related Topics:2020 ElectionLandlordsproperty tax
Up Next

Foreign Observers Wary of ‘Chaos,’ ‘Rancor’ in US Debate

Debate Takeaways: An Acrid Tone From the Opening Minute