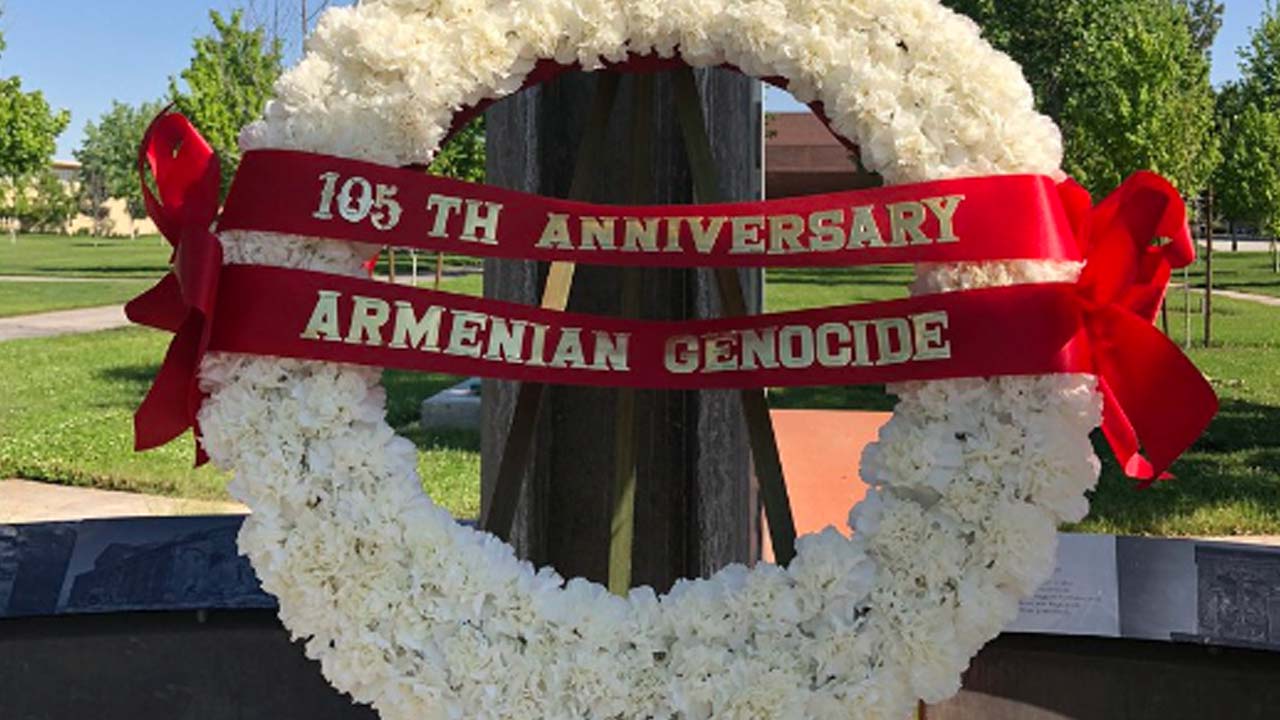 Social distancing didn’t stop commemorations of the 105th anniversary of the Armenian Genocide in the Valley.
There were no crowds of people, but crowds of video messages instead.

“We may not be able to stand together in memorial, but we can stand together in spirit,” said Fresno Mayor Lee Brand.
This year, together with video messages, Armenian-Americans will remember this atrocity in their homes by lighting candles and saying prayers.
Congressman Jim Costa, in a YouTube post said, “This horrific genocide that took place was finally last year recognized by the United States Congress.”
It was passed by the House and Senate, but President Trump did not sign the resolution.
Costa continued by saying, “So we dedicate ourselves to a better America, to a better world as we combat this deadly virus.”
Both the mayor and Costa have long publicly recognized the Genocide.
California Senator Andreas Borgeas emailed a statement to GV Wire, “Congress finally gave formal recognition to the Armenian Genocide, and President Trump should do the same. Representing a significant Armenian population in the State Senate with strong ties through family and faith, its recognition was deeply emotional for our community. I will never forget hearing from my wife’s grandmother how as a little girl she survived the burning of Smyrna in 1922. May we never forget.”

Remembering the #ArmenianGenocide today by sharing one of our family’s most cherished photos: the matriarch of our family, and Genocide survivor (Smyrna 1922), receiving for the first time my boy, her Great-Grandson. #TurkeyFailed #NeverAgain ?? pic.twitter.com/2YiKol5WMM

“We are most fortunate, here in Fresno, to have leaders who aren’t reluctant to do the right thing, which is to recognize the Armenian Genocide.  The Mayor and Congressman have always been staunch supporters of recognizing the Ottoman Turks killing of Armenians from 1915 to 1923 as a Genocide,” said Sevag Tateosian, Chairman of the Armenian National Committee of America–Central California.
Congressman TJ Cox also issued a video tribute, saying “Although the effects of the coronavirus have restricted our ability to gather and commemorate April 24th with the March for Justice, I’m honored to be a voice to speak to the denial of the Armenian Genocide.”
The Armenian National Committee of America posted a thank-you to Rep. Devin Nunes on Facebook after he called on President Trump to formally recognize the Armenian Genocide.

Thank you Congressman Devin Nunes (R-CA) for your powerful statement calling on President Trump to properly commemorate the Armenian Genocide.

Fresno State President Joseph Castro marked the anniversary this morning at the Armenian Genocide Monument.
Fresno State has the first Armenian Genocide memorial in the nation built on a university campus.
The monument consists of nine concrete pillars that represent different regions and time periods in Armenia. The top of the monument is a halo that is cut in half to represent the people who were killed in the genocide.

.@Fresno_State Pres. @JosephICastro marks 105th Anniversary of the Armenian Genocide. The Memorial is the first in nation built on a university campus. “A symbol of hope, education, memory & inspiration. Let us never forget the Genocide or the triumph of the Armenian people.” ?? pic.twitter.com/l22sd035Vq

The office of Governor Newsom issued a statement Friday afternoon on Twitter:
“Today CA remembers all those who perished in the 1915 Armenian Genocide and pledges ‘never again.’ We also honor the strength & resilience of the Armenian people, who contribute so much to our state. Let us always stand up to violence & hatred and protect one another.”

Today CA remembers all those who perished in the 1915 Armenian Genocide and pledges "never again."

We also honor the strength & resilience of the Armenian people, who contribute so much to our state.

Let us always stand up to violence & hatred and protect one another.

According to the LA Times, because of the coronavirus pandemic, the annual March for Justice in downtown Los Angeles and performances at the Alex Theatre in Glendale didn’t take place. Instead, the Armenian community is organizing a humanitarian fundraiser to support Feeding America, a hunger relief organization with a nationwide network of food banks.
The effort is in honor of the Near East Relief, which was a large-scale humanitarian operation formed by the United States in the 1920s to help Armenian Genocide survivors, including saving 132,000 Armenian orphans, and establishing more than 400 refugee centers, hospitals, vocational schools, and orphanages, according to officials with ANCA in Glendale.
To make a donation, visit 1915neveragain.org/donate.

Due to #COVID19, commemoration events moved online with a humanitarian fundraiser to support @FeedingAmerica. The effort is in honor of the Near East Relief, the humanitarian operation by the United States in the 1920s to help #ArmenianGenocide survivors. pic.twitter.com/SGGkf73Sca

Normally, during the annual March for Justice, tens of thousands of Armenians take to the streets in L.A., calling on Turkey to recognize the Armenian Genocide. The Ottoman Empire, now modern-day Turkey, led the genocide.

History of the Armenian Genocide

Historians estimate that up to 1.5 million Armenians were killed around World War I, and many scholars see it as the 20th century’s first genocide. Turkey disputes the description, saying the toll has been inflated and those killed were victims of a civil war.
Turkey has lobbied for years against U.S. recognition of the killings of Ottoman Armenians as genocide.
Turkey has instead called for a joint committee of historians to investigate the slayings.

Harder Than Shutting Down: How Does Newsom Reopen California?