Washington state’s governor announced a ban on gatherings of more than 250 people in virtually the entire Seattle metro area Wednesday to try to stop the spread of the coronavirus in the state where at least 24 people have died.

“This is not just your ordinary flu. This demands a response consistent with the nature of the threat.” — Gov. Jay Inslee

The directive from Gov. Jay Inslee encompasses 4 million people and does not affect workplaces or classrooms but applies to such events as Seattle Mariners baseball games. It was not immediately clear whether that means the team will play it home games in an empty stadium, as soccer teams in Europe are doing.

Washington is the home of the biggest cluster of coronavirus deaths in the U.S. Nineteen of them have been linked to a single suburban Seattle nursing home, and authorities in Seattle’s King County have said the virus has spread to at least 10 such facilities. The elderly and the sick are especially vulnerable to the disease.

“This is not just your ordinary flu,” Inslee said. “This demands a response consistent with the nature of the threat.”

The order, which will remain in effect through at least the end of the month, came as political leaders around the country scrambled to ban or discourage public gatherings, a rapidly expanding list of universities moved their classes online, and the U.S. government’s top infectious-disease expert warned that the worst is yet to come.

With cases in the U.S. topping 1,000 and the number of deaths climbing to 31, lawmakers and health officials set up containment zones and sought to limit contact with those who might be infected. The outbreak has spread to more than half the states, with Arkansas and New Mexico reporting their first cases of the virus.

The World Health Organization, meanwhile, declared the virus a pandemic, or a serious, global outbreak, noting that the number of cases outside China had increased 13-fold over the past two weeks. Designating the crisis a pandemic is the WHO’s way of putting countries on notice to take more aggressive action against the virus, which has infected over 120,000 people worldwide and killed nearly 4,400.

San Francisco officials advised people to cancel events of 50 or more and banned non-essential gatherings of 50 or more people at City Hall, convention center, performing arts centers and several other city-owned facilities for the next two weeks. Californiaa’s Santa Clara County, home to San Jose and Silicon Valley, prohibited all gatherings of 1,000 people or more.

“I don’t believe that whether you go to church during this period of time is a test of faith,” he said. “I believe God gives us wisdom to protect each other and we should do that.”

Schools and houses of worship were shuttered in the New York City suburb of New Rochelle, epicenter of the nation’s biggest known cluster of cases, with over 100. Gov. Andrew Cuomo said he intends to send the National Guard to help scrub public spaces and deliver food, though no troops appeared to be in place Wednesday morning.

As for how much worse, Fauci said that would depend on the ability of the U.S. to curtail the influx of travelers carrying the disease and state and community efforts to contain the outbreak. He said if mild cases of the virus are counted, the mortality rate is probably about 1 percent — “roughly 10 times more lethal than the seasonal flu.” 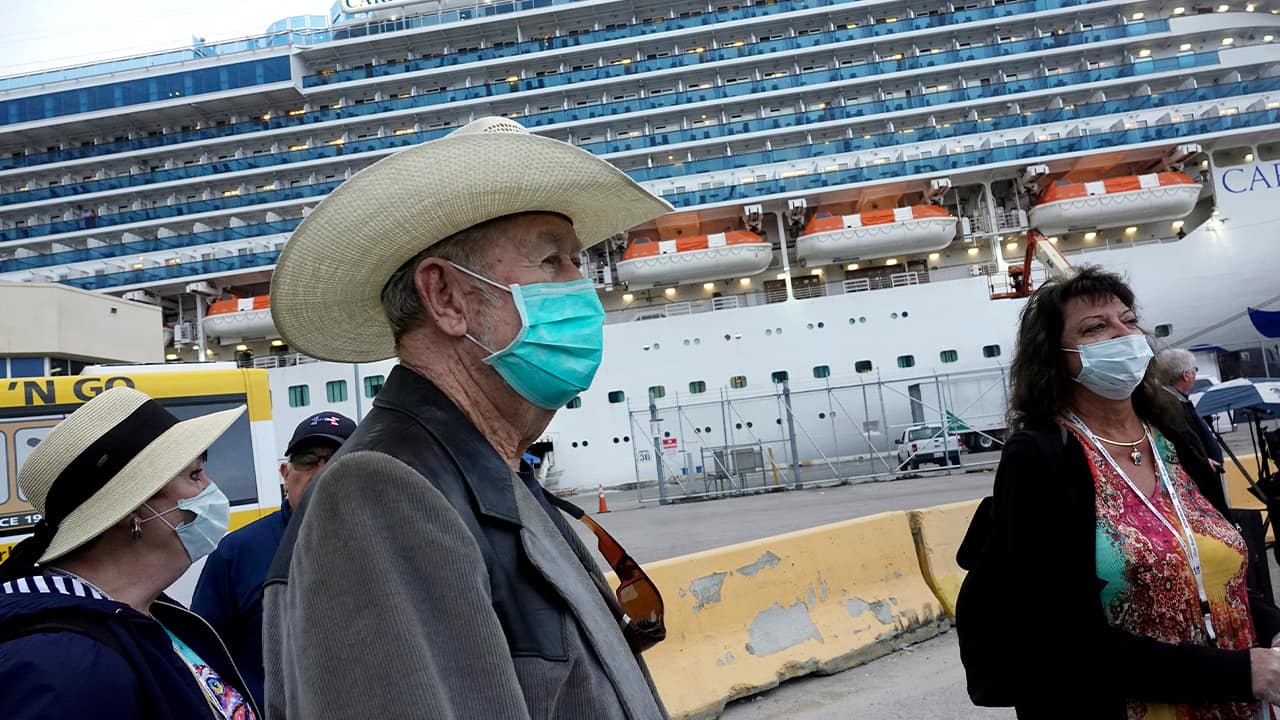 Jana Harrelson, left, Ronny Young, and Karla Weston, right, all of Port St. Joe, Florida, disembark from the Caribbean Princess at Port Everglades in Fort Lauderdale, Fla., Wednesday, March 11, 2020. The cruise ship was been given federal permission to dock in Florida after testing of two crew members cleared them of the new coronavirus and U.S. health officials lifted a “no sail” order. (Joe Cavaretta/South Florida Sun-Sentinel via AP)

UCLA, Yale and Stanford were among the universities announcing plans to send students home and hold classes remotely.

Chicago canceled its St. Patrick’s Day parade, joining Boston and Philadelphia, while the Coachella music festival that draws tens of thousands to the California desert near Palm Springs every April was postponed. Instead of hosting 100,000 at its twice-yearly conference in Salt Lake City next month, the Church of Jesus Christ of Latter-day Saints said it will hold the gathering online and on TV, with leaders delivering speeches without any attendees.

For most people, the virus causes only mild or moderate symptoms such as fever and cough. For some, especially the elderly and people with existing health problems, it can cause more severe illness, including pneumonia. Most people recover in a matter of weeks, as has happened with the majority of those infected in China, the virus’ country of origin.

“If you want to be blunt, Europe is the new China,” Robert Redfield, director of the Centers for Disease Control and Prevention, told Congress, meaning that the movement of people from Europe is the primary source of the virus in the U.S.

Tests by U.S. government scientists and other experts found that the virus can live in the air for several hours and on some surfaces for two to three days.

For those in the middle of a quarantine, it’s an anxious time waiting for the threat to pass.

Judy Aqua, who is in her 60s, is quarantining herself at home in New Rochelle after possibly being exposed to someone with the virus.

The virus is also taking its toll on sports: Some college games will be played without fans in Ohio and California, and the NCAA said it will make decisions in the coming days about its men’s and women’s basketball tournaments. Two conferences banned fans from their championships, and the Ivy League canceled its basketball tournaments altogether.

Massachusetts Gov. Charlie Baker declared a state of emergency as cases statewide jumped to 92. Of that number, 70 are now connected to a meeting held last month by biotech company Biogen at a hotel in downtown Boston.

A woman from suburban Houston flew home from Italy after testing positive, and now everyone on the two flights she took could be at risk. Health officials urged passengers to quarantine themselves.

Some airport workers are also dealing with the outbreak, with several Transportation Security Administration officers at the San Jose airport testing positive. All TSA employees who had contact with them over the past 14 days are being quarantined at home, the agency said.

In Oakland, California, restless passengers on a coronavirus-struck cruise ship awaited their turn to disembark. By Tuesday night, Princess Cruises said about 1,400 of the 3,500 people on board had gotten off, and efforts were underway to move them to quarantine in their home countries or at military bases in California, Texas and Georgia.

California Gov. Gavin Newsom urged the state’s nearly 40 million residents to avoid sporting events, concerts and other large gatherings and strongly warned the elderly to stay away from cruise ships.