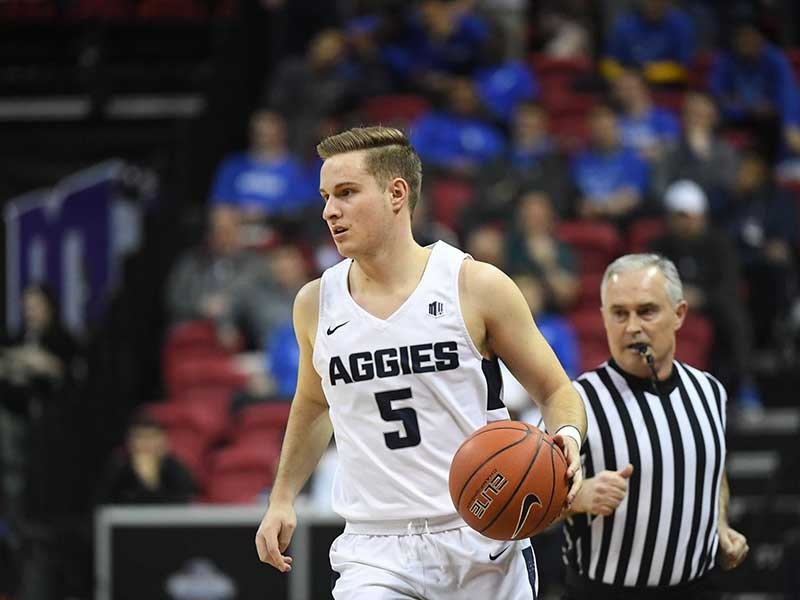 For a minute midway through the second half Saturday night, the Fresno State men’s basketball could envision an upset victory over Utah State at the Save Mart Center.
A 7-0 run anchored by Noah Blackwell’s two 3-pointers had pulled the Bulldogs within a point of the Aggies, 45-44, with 10 minutes, 47 seconds remaining.
But Utah State, which never trailed in the game, methodically pulled away for a 71-59 Mountain West victory.
“We couldn’t put the ball in the basket early,” said Fresno State coach Justin Hutson. “We wanted to drive down and move the ball and we had times that we did.
“When they went to their zone, if we could have made a couple of those open 3s, then it would’ve been different.”

Guard Sam Merrill, the reigning Mountain West player of the year, led Utah State with 24 points and added four assists. He made 3 of 6 from 3-point range, 8 of 15 overall, and 5 of 6 free throws.
Justin Bean added 15 points and 11 rebounds for Utah State (21-7, 10-5), and Diogo Brito had 10 points.
Utah State has won four straight games and seven of its last eight to move into second place.
Blackwell had 13 points for Fresno State (9-17, 5-10), which has lost three of four. Nate Grimes added 11 points and 10 rebounds.
The boxscore is at this link.

Fresno State hosts Air Force (10-16, 4-10) on Wednesday at the Save Mart Center.
The Mountain West standings are at this link.

Hamlin and Newman Contrast Risk and Reward at Daytona 500