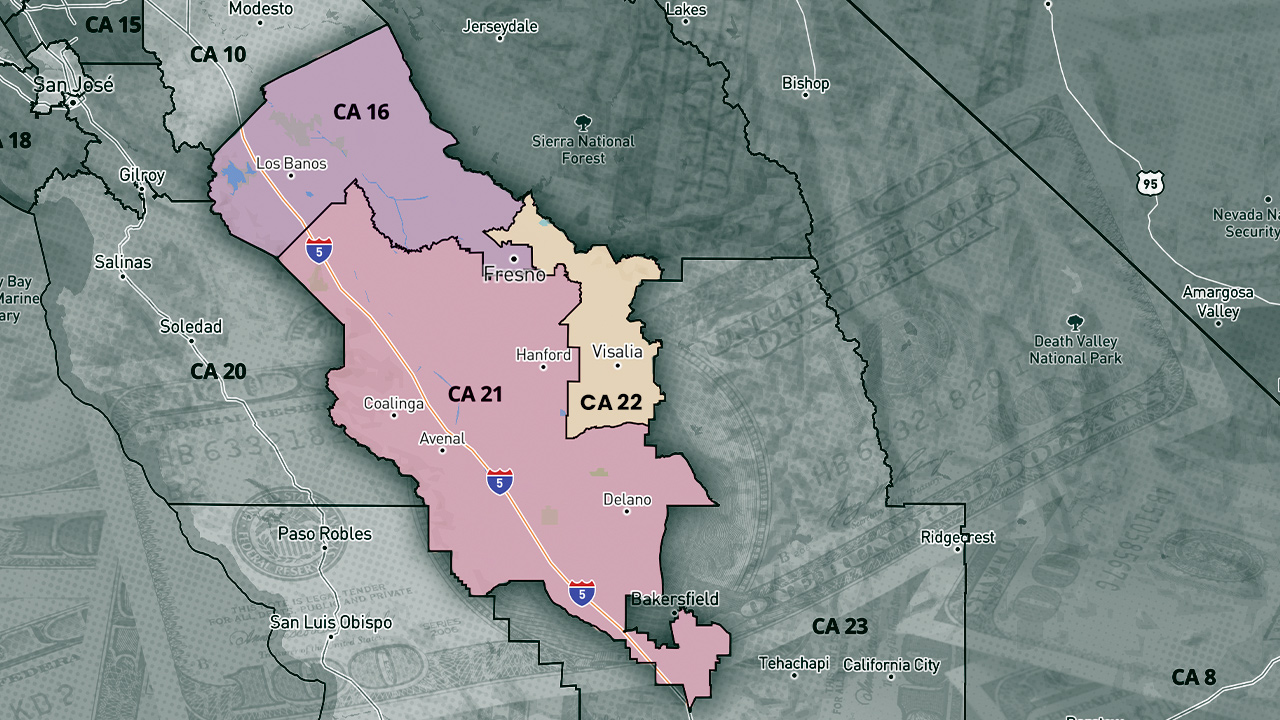 Incumbents in two of the three congressional races in the central San Joaquin Valley have substantial fundraising advantages.
The third race, meanwhile, is a virtual tie.
Congressional campaign fundraising figures are in for 2019 from the Federal Election Commission. Jim Costa (D-Fresno) and Devin Nunes (R-Tulare) are up big in their respective races.
The rematch between incumbent TJ Cox (D-Fresno) and former District 21 representative David Valadao (R-Hanford) is bringing major contributions to both candidates.
However, Valadao has a slight edge in the important cash-on-hand category.

Nunes, running for his 10th term, raised $7.9 million for the year, including a $2.1 million fourth quarter.
That is nearly six times more than his four opponents combined for 2019.
OpenSecrets ranks Nunes’ contributions as the second-most for all of the House races, runner-up to only Republican Steve Scalise of Louisiana.
Phil Arballo, one of three Democratic challengers to Nunes, raised the next most, with $1 million for the year. He has $559,827 cash on hand.
Bobby Bliatout ranks third for fundraising in the district. His totals were boosted by his $100,000 loan to his campaign.

Costa, the eight-time congressman, raised $1.2 million for the year, with $509,933 coming in the fourth quarter.
A list of his contributors includes many CEO and farmers. It also includes money from a variety of corporate, business, and issue-oriented PACs.
Esmeralda Soria, a fellow Democrat and Fresno city councilwoman, raised $301,416 for the year. According to her FEC filings, she remained true to her word about not accepting corporate PAC funding, although she did accept labor PAC money.
Her contributors also featured many familiar names around City Hall, like business developer Richard Spencer ($2,500) and developer and Planning Commissioner Brad Hardie ($1,000).

Both Cox and Valadao can claim fundraising victories, depending on the metric.
Cox raised more money overall for 2019, although Valadao didn’t officially enter the race until September.
Valadao can say he raised more in the fourth-quarter and has more cash on hand.
This race may see third-party spending flood the district.
For 2019, outside groups spent $4,446 — from United We Can — supporting Cox; the California Labor Federation spent $38,300 opposing Valadao. Expect those figures to swell in 2020.
Two other candidates, the father-son duo of Rocky and Ricardo De La Fuente, qualified for the ballot but did not file financial documents.
For all the races, the top-two vote-getters advance to the November primary, regardless of party or achieving a majority. Fundraising limits reset after the primary, although candidates are allowed to raise money for the general election now.