Patriotism, conservatism, and kicking Commie butts could be a mantra that not only applied to politics in 1984, but to pro wrestling as well.

Only a few weeks after Ronald Reagan won reelection in a landslide, the WWF held a card at Selland Arena in Fresno on Nov. 25, 1984. It was the wrestling promotion’s fourth card in the city that year following the WWF’s initial foray into Fresno.

The main event saw super patriot Sgt. Slaughter go to war on the mat with his enemy, the evil Iron Sheik of Iran. The two men had been battling and spilling blood against each other for most of the year.

It’s believed to be the first Fresno match for Slaughter, a future WWF Hall of Famer. Unlike baseball, where decades of box scores are available on the internet, wrestling results are scattered and generally lost to history. While in theory, Slaughter (real name Robert Remus) could have wrestled in Fresno before 1984, it would have been under a different gimmick.

For many years, Slaughter was the bad guy, a mean-spirited drill sergeant who thrived on pain and humiliation. He adopted the gimmick in the late 1970s, playing off his real-life Marine Corps service, and established himself as one of the world’s top wrestlers.

But, a chance run-in with the Sheik in February 1984 rekindled Sarge’s love of country. While the feud peaked with a Boot Camp match at New York City’s famed Madison Square Garden in June that stained the mats red, the Slaughter-Sheik matchup continued to headline as the WWF expanded to more markets.

Fresno was one of them. It was part of Vince McMahon’s strategy to take his northeast-based company national. Syndicating his shows across the country was part of that strategy. In Fresno, “Superstars of Wrestling” aired Saturdays at 10 p.m. on KAIL-53. 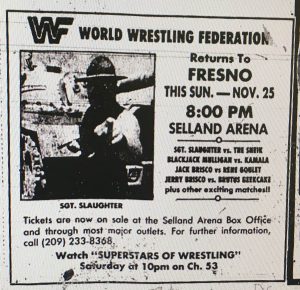 According to an ad in The Fresno Bee at the time, and results from The History of WWE, 8,603 fans saw Slaughter pin the Sheik that night. It was the largest reported attendance of the four Fresno shows in 1984. The show took place the Sunday evening after Thanksgiving.

In other matches, Bret Hart opened with a time-limit draw with Rick McGraw. While Hart would go on to become one of the all-time greats — five-time WWF champion, Hall of Famer and considered one of the best in-ring performers — in 1984, he was just another wrestler, lost in the shuffle. Long before he became the “Hitman,” Hart had a cowboy gimmick.

Jerry Brisco defeated Brutus Beefcake by DQ. Brisco later became a long-time agent (or producer) for the WWF. Beefcake, the bad guy here, had just started his WWF career. This was years prior to adopting the gimmick as “The Barber.”

The other match saw Blackjack Mulligan defeat Prof. Toru Tanaka by pin. Tanaka substituted for the Ugandan Giant Kamala, who quit a few weeks before the Fresno card. Apparently, it was too late to change the print advertisement. Tanaka came out of retirement to fill in for Kamala for the week, while the WWF toured the West Coast.

One of Sarge’s Last WWF Matches at the Time

In an era where most big-name wrestlers joined the WWF, a week after his Fresno match, Slaughter quit the WWF.

For Slaughter, he had a bigger opportunity that presented a conflict, a chance to work as the spokesman for the G.I. Joe toy line. The deal created problems with WWF promoter Vince McMahon.

According to an interview on the Prime Time with Sean Mooney podcast, McMahon told Slaughter that the WWF had a deal with another toymaker, LJN. If he wanted to go with G.I. Joe and its maker Hasbro, he couldn’t do it while with the WWF.

“I went home dejected, and didn’t know what to do,” Slaughter said. He gave his notice, against McMahon’s wishes, telling him “I can always be a wrestler, but I can’t always be a G.I. Joe.”

For the next five years, Slaughter was the living embodiment of a G.I. Joe. He appeared in the commercials for the action figures, appeared on the cartoon show, and even had a figure of his own.

Slaughter continued in the ring, mainly with the AWA. By 1990, Slaughter’s G.I. Joe deal expired, and he returned to the WWF, once again as a bad guy, the return of the dreaded drill sergeant.

Slaughter eschewed his loyalty to America, trading his American camouflage for Iraqi khakis. Slaughter became a Saddam Hussein sympathizer, and instantly the No. 1 bad guy in the WWF by the fall of 1990.

When Slaughter turned his back on his country, the conflict in the Middle East was just brooding. By January 1991, it escalated into a full-out war. Pro wrestling fantasy became real.

Slaughter said he received numerous death threats and needed extra security. The added notoriety benefited Slaughter in the ring. He won the WWF championship from the Ultimate Warrior at the 1991 Royal Rumble.

Eventually, Slaughter became a good guy again, wanting his country back. He stepped away as a full-time wrestler in 1992. To this day, he continues to make appearances at wrestling conventions and events for what is now the WWE. On occasion, he will don the tights.

But, it was 35 years ago that Fresno fans got a taste of Slaughter, and his brand of pro wrestling patriotism, for the first time. 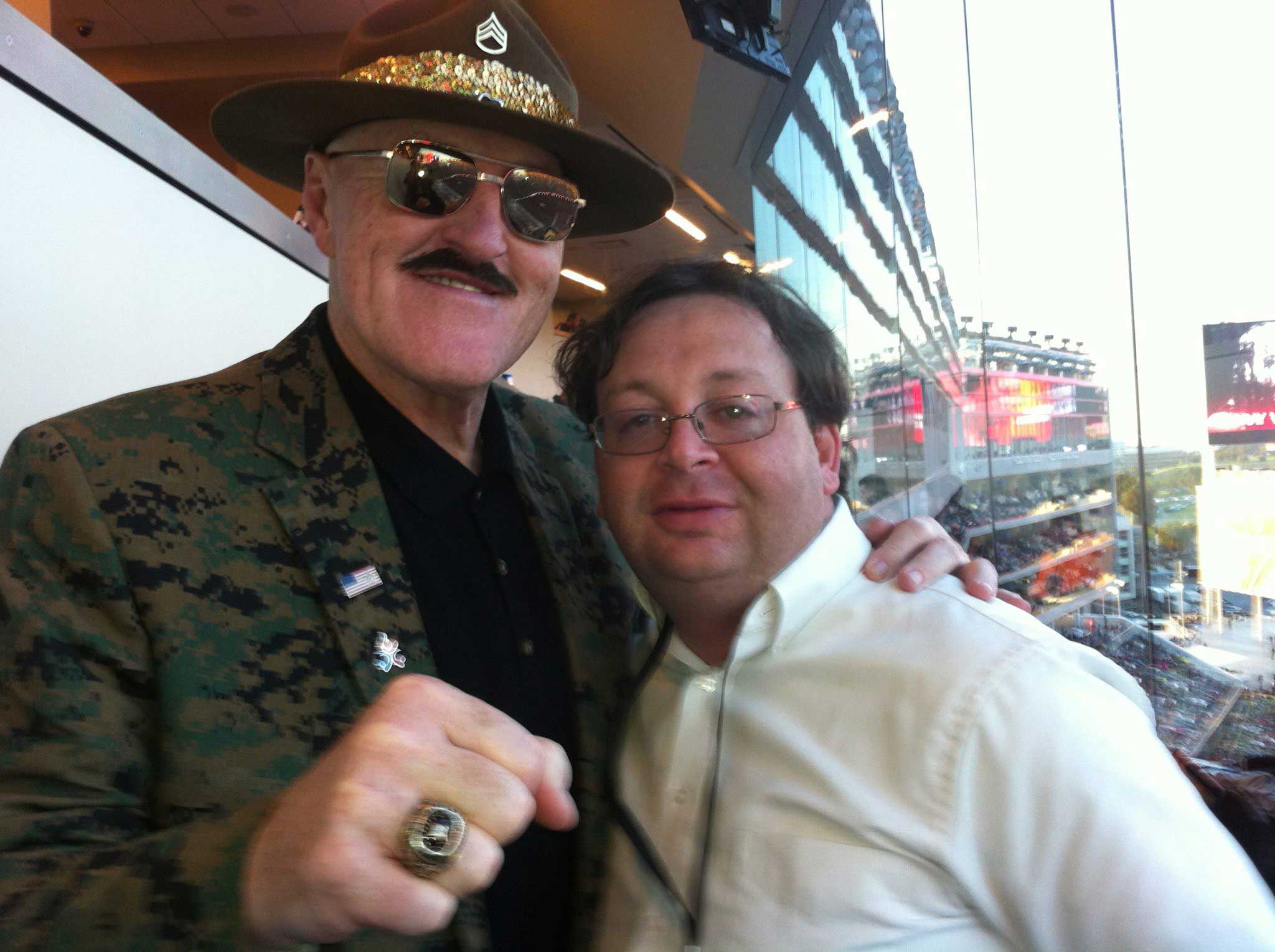