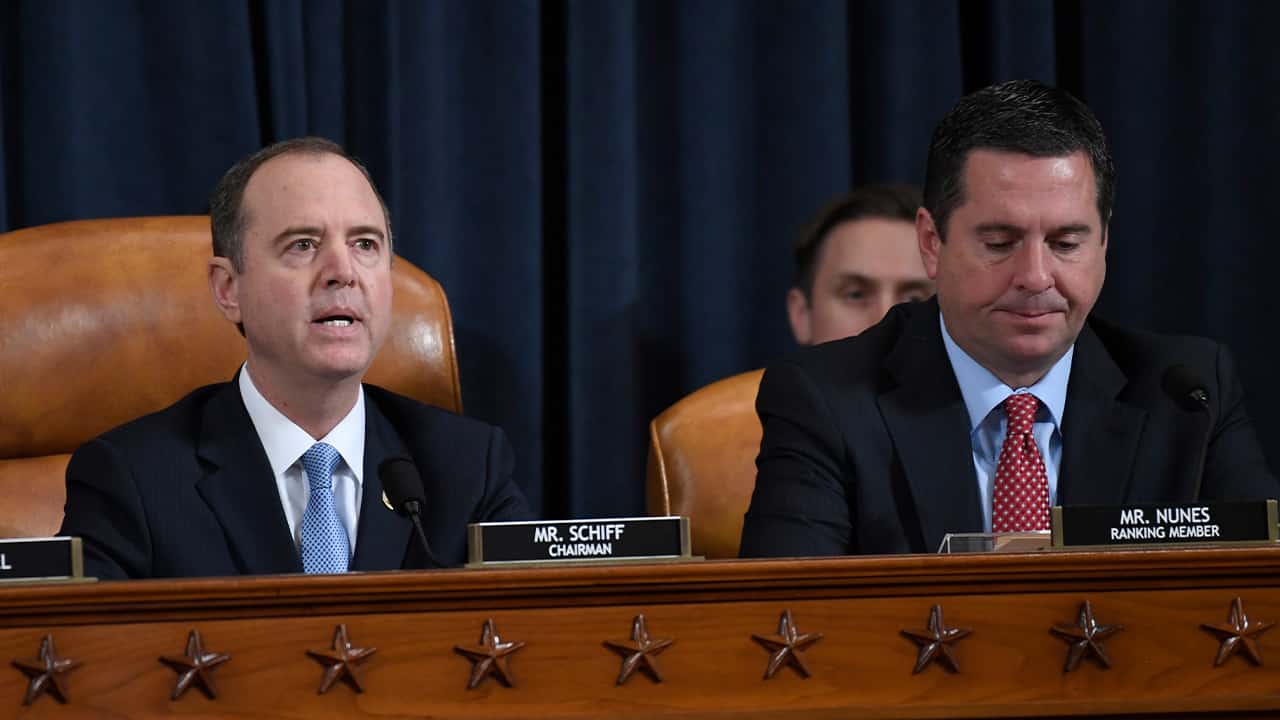 WASHINGTON — Congressional Republicans at impeachment hearings Tuesday tried to defend President Donald Trump by pushing a widely discredited claim that former Vice President Joe Biden pressed Ukraine’s government to shut down a corruption investigation of Burisma, the energy company paying Biden’s son Hunter.
A look at some of the remarks in the second round of public hearings in the impeachment inquiry by the House Intelligence Committee:
REP. DEVIN NUNES, the top Republican on the committee, speaking of the news media: “You’d think they would be interested in Joe Biden threatening to withhold U.S. loan guarantees unless the Ukrainians fired a prosecutor who was investigating Burisma. That would be a textbook example of bribery.”
THE FACTS: The prosecutor wasn’t investigating the company at the time. Moreover, the United States and Europe wanted Ukraine to do a broader, more aggressive investigation of corruption in the country, and Biden was among the international leaders who considered the prosecutor ineffective.
Trump and his personal lawyer, Rudy Giuliani, have defended their actions in asking Ukraine to investigate the Bidens by citing a video of Joe Biden from 2018. Speaking on a public panel, Biden recounted threatening to withhold a $1 billion loan guarantee from Ukraine’s government unless it fired the prosecutor who the U.S. and other countries said was failing to fight corruption.
In early 2016, Biden did push Ukraine to fire the prosecutor charged with investigating Burisma, a company where Hunter Biden was a board member, except that the prosecutor had already stopped investigating. Ukraine fired the prosecutor. “Now that the whistleblower has successfully kickstarted impeachment, he has disappeared from the story, as if the Democrats put the whistleblower in their own witness protection program.” — Rep. Devin Nunes
Trump and his GOP allies are suggesting that the whistleblower’s complaint is false, and so the person has vanished. But key details have been corroborated by people with firsthand knowledge of the events who have appeared on Capitol Hill.
The rough transcript of the July 25 phone call between Trump and Ukraine’s leader also showed that the whistleblower had accurately summarized the conversation in the complaint sent to the acting director of national intelligence.
The whistleblower has offered through the whistleblower’s lawyers to answer questions directly from Republicans on the committee “in writing, under oath & penalty of perjury.” But Republicans, who are interested in exposing the whistleblower’s identity, want that official to appear at the public hearings.
U.S. whistleblower laws exist to protect the identity and careers of people who bring forward accusations of wrongdoing by government officials. Lawmakers in both parties have historically backed those protections.
Trump himself refused to provide anything but written answers in response to limited questions during the special counsel Robert Mueller’s investigation into Russian interference during the 2016 election. Trump this week suggested he may submit written answers for the impeachment inquiry as well.