Trump: Whistleblower 'Must Be Brought Forward to Testify' 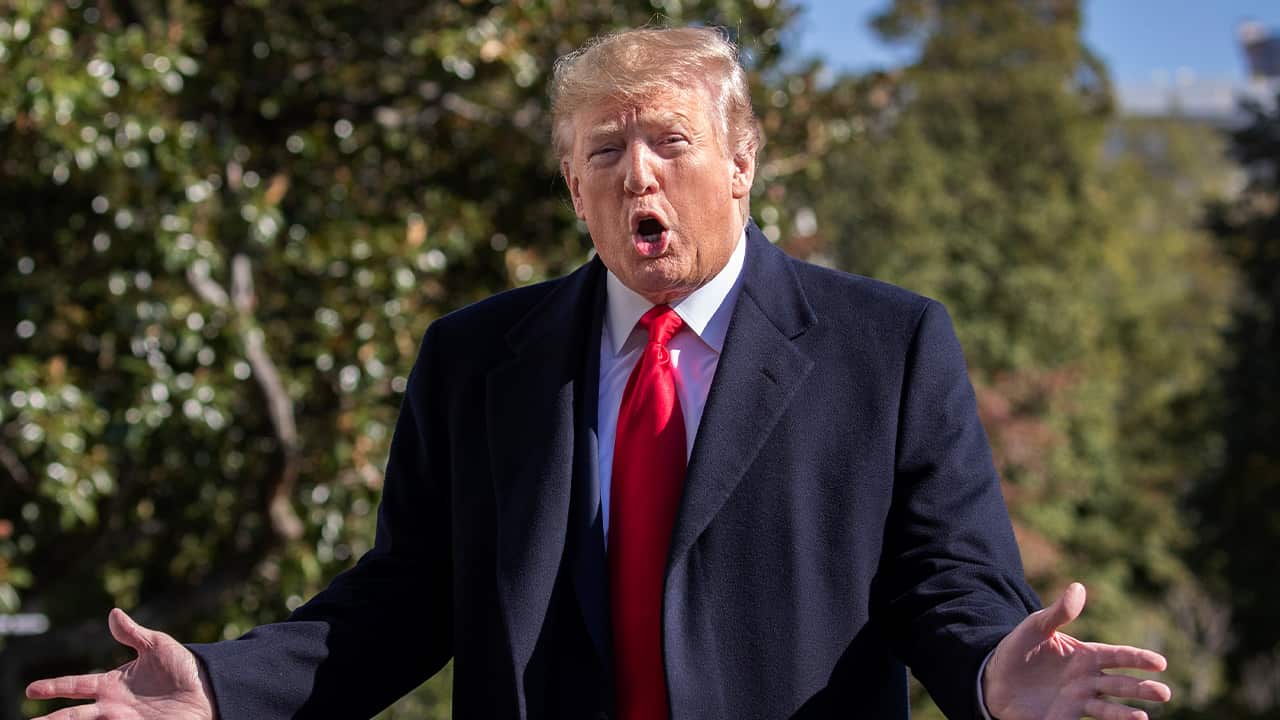 WASHINGTON — The whistleblower who raised alarms about President Donald Trump’s dealings with Ukraine and touched off the Democratic-led impeachment inquiry is willing to answer written questions submitted by House Republicans, the person’s lawyer says.

Trump Has Denied He Did Anything Wrong

But Trump, weighing in on Twitter Monday morning, said the person should appear publicly.
“He must be brought forward to testify. Written answers not acceptable!” Trump wrote, slamming the entire process as a “Con!”
Trump has denied he did anything wrong in his July 25 phone call with Ukrainian President Volodymyr Zelenskiy, in which he pressed Zelenskiy to investigate Trump’s political rivals. At the time, the administration was withholding military aid to Ukraine that had been approved by Congress.
That call sparked the complaint that led to the inquiry.
Zaid said the whistleblower would answer questions directly from Republican members “in writing, under oath & penalty of perjury.” Only queries seeking the person’s identity won’t be answered, he said.
Nunes’ office did not have immediate comment.
The new proposal came as Trump stepped up his attacks on the investigation, tweeting on Sunday, “Reveal the Whistleblower and end the Impeachment Hoax!”
The whistleblower’s secondhand account of the phone call has been providing a road map for House Democrats investigating whether the president and others in his orbit pressured Ukraine to probe political opponents, including former Vice President Joe Biden. Speaker of the House Nancy Pelosi, D-Calif., talks to reporters just before the House vote on a resolution to formalize the impeachment investigation of President Donald Trump, in Washington, Thursday, Oct. 31, 2019. (AP Photo/J. Scott Applewhite)

The Whistleblower’s Complaint Has Been Corroborated in Many Respects

Democrats are heading into a crucial phase of their impeachment inquiry as they move toward public impeachment hearings this month. They have called for testimony in the coming weeks from 11 witnesses, including Energy Secretary Rick Perry and former national security adviser John Bolton in closed-door interviews. It’s unclear whether any of them will come to Capitol Hill.
Trump is also pushing the news media to divulge the whistleblower’s identity.
“They know who it is. You know who it is. You just don’t want to report it,” Trump told reporters at the White House on Sunday. “And you know you’d be doing the public a service if you did.”
The Associated Press typically does not reveal the identity of any whistleblower.
The whistleblower’s complaint has been corroborated in many respects by people with firsthand knowledge of the events who have appeared on Capitol Hill.
Trump says he demanded no quid pro quo, as has been alleged, but he also says such arrangement are common while leveraging power in conducting foreign policy.
The whistleblower has become a central focus for Republicans, and in particular the president. The intelligence community’s inspector general has said the person could have an “arguable political bias,” but he nevertheless found the whistleblower’s complaint to be “credible.”

The Inquiry Was Approved in a Mostly Partisan Vote

The president believes that if he can expose bias in the initial allegations against him, he can paint the entire impeachment inquiry as a partisan, political probe. To this point, Republicans have largely fought the inquiry on process, not substance, arguing it is tainted because interviews are being conducted in closed sessions — though GOP lawmakers are in attendance and grilling the witnesses — and complaining that House Speaker Nancy Pelosi had not called a vote to launch the matter.

From Toast of Town to Toxic: Facebook CEO on Outs With Dems