WELLINGTON, New Zealand — Two little blue penguins just couldn’t stay away from a New Zealand sushi store, returning to nest there even after police had captured them and escorted them back to the ocean.

Wellington police described them as “waddling vagrants,” while the store’s co-owner joked he had no idea that word of his tasty raw fish had reached as far as the subaquatic community.

“They were within penguin commuting distance of the harbor, and they thought they’d found a nice spot.” — Jack Mace, New Zealand Department of Conservation

But Jack Mace, an operations manager for the Department of Conservation, said the birds would have simply thought they had found a snug burrow underneath the store and wouldn’t have taken note of what was being sold above them.

“They were within penguin commuting distance of the harbor, and they thought they’d found a nice spot,” Mace said.

Police got the first call about a penguin loose in the city on Saturday night, after somebody reported spotting a grumpy bird under a parked car. Police said they managed to release it back into the ocean.

“The waddling vagrants were removed from their sushi stand refuge earlier today by Constable John Zhu,” police wrote on their Facebook page. “Unsurprisingly, this was not the first report police had received about the fishy birds.”

And it turned out it wouldn’t be the last.

Within hours, the two penguins were back underneath the shop.

Co-owner Long Lin said he was tidying up the storage room when he heard a sound from near the water tank. He walked outside and peered underneath the store and thought he was looking at a pigeon.

He called authorities, but meanwhile the penguins waddled out. So he grabbed them one by one and put them inside the store. He said the second penguin pecked at him several times, leaving red welts on his chest. 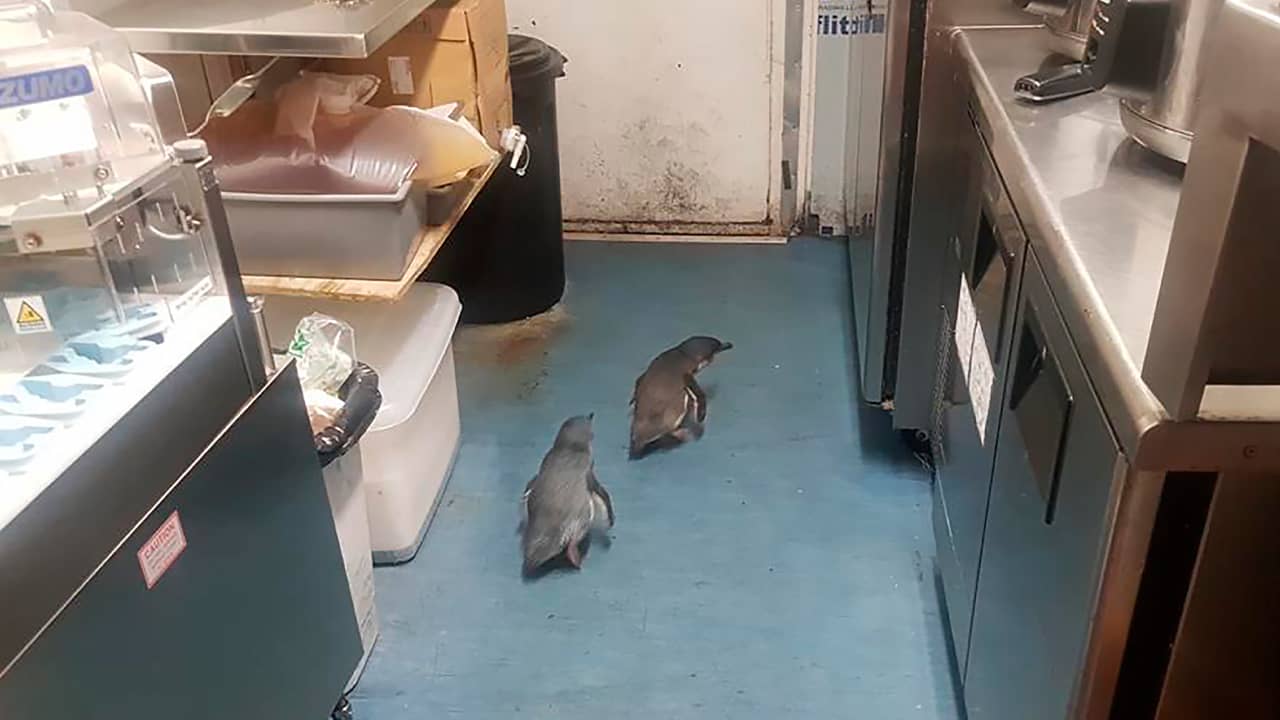 Penguins make their way in a sushi shop in Wellington, New Zealand. (Shawnee Kim via AP)

Inside the store, the birds strutted about seemingly without a care, to the amazement of worker Shawnee Kim.

Kim said she tried offering them some fresh salmon, but they didn’t seem interested.

Mace said rangers managed to extract the birds from under the store’s freezer and put them in a special nesting box on the harbor, which is about a 200-meter (660-foot) waddle from the store.

Mace said the penguins haven’t been seen since and may be out at sea.

He said the population of little blue penguins has rebounded in Wellington thanks to the efforts of people who have removed predators from three islands in the harbor and have helped with other conservation efforts, like building artificial nest boxes.