Update, 6/27/2019, 4 p.m.: The Fresno City Council unanimously passed the airport project labor agreement Thursday. Council members said they expect the expansion project to be performed on time and with no budget overages.
Original story:
Supporters of a labor deal for the $115 million parking and terminal expansion at Fresno Yosemite International Airport say it will help put disadvantaged Fresnans to work.
But others are not so sure.
The city council votes on a project labor agreement with the Fresno, Madera, Tulare, Kings Building and Construction Trades Council at its Thursday meeting.
The council voted unanimously in March to have staff work on the PLA. In addition, mayor Lee Brand supports the pact, calling it “an opportunity to start to change the narrative of Fresno.”
Details of the proposed agreement were released this week.
“It gets different people from different segments of the community working,” council president Paul Caprioglio said. He led a council subcommittee on the issue. Members met with a host of business and labor groups to craft a deal.
The agreement allows the trade council to screen and refer workers used by contractors who submit winning bids.
“It has huge benefits to the city,” said trade council representative Chuck Riojas. Riojas highlights cost savings and the local hire provisions.
The contract also prevents any work stoppages or disruptive activities, such as strikes.
The deal is notable given City Hall’s longtime avoidance of PLAs. The city banned the pacts from 2000 to 2014. And the only previous project built under a PLA was City Hall, which opened in 1992 at a cost of $34 million. 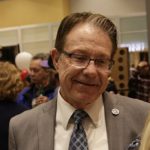 “(The goal is to) get the unemployed employable.” — City council president Paul Caprioglio
The PLA reserves a percentage of the project workforce for those living in the area.
For example, 30% of journeyman workers would be local hires. The contract defines local hires as either living in the city of Fresno (called Tier I), or in Fresno or Madera counties (Tier II). For apprentices,  40% have to be local hires, with a priority for Tier I.
Both groups have to live in the top 5% of disadvantaged communities designated by CalEnviroScreen 2.0, a program designed by the state EPA that maps the pollution index by each census tract.
While most of south Fresno meets that designation, other parts of the city do not. That includes Caprioglio’s District 4, where Fresno Yosemite International is located.
“(The goal is to) get the unemployed employable,” Caprioglio said. “Employment equals income to get out of poverty.”
Riojas anticipates local hires will fill the remainder of the jobs as well. But the proposed pact doesn’t preclude out-of-area workers on the project.

Additionally, 10% of journeyman work hours should be performed by disadvantaged workers. That category covers veterans, someone exiting the foster care system in the last five years, the formerly incarcerated,  anyone receiving government befits, or a single parent.
Kevin Dayton, president and CEO of Labor Issues Solutions and monitor of state labor deals, wonders how hiring disadvantaged workers will play out.
“It’s not easy to recruit, train, and employ truly disadvantaged workers. If it was, they won’t be disadvantaged. So I always wonder what the loopholes will be to achieve the goals,” Dayton said.
Councilman Luis Chavez says the agreement is meant to be as inclusive as possible.
“The agreement was written not to exclude anyone, but provide opportunities to disadvantaged folks and get them out of poverty,” Chavez said.

Will Non-Union Contractors Bid on Project?

“It’s not worth it to us (to bid on the project).” — Kate Bremer-Baumann of Harris Electric
The proposed contract states that the building and construction union “shall be the primary source of all craft labor.”
However, it also states that “no employee covered by this Agreement shall be required to join any Union as a condition of being employed, or remaining employed.”
Riojas acknowledges that the language can be confusing. He clarifies that while a worker does not have to be a union member to apply for the job, the worker must join the union for the duration of the project.

“The agreement was written not to exclude anyone, but provide opportunities to disadvantaged folks and get them out of poverty.” — City councilman Luis Chavez
That presents a problem for non-union (or open shop as they are called) contractors.
“We typically don’t bid public projects because of these issues,” Kate Bremer-Baumann, with Fresno-based contractor Harris Electric said. “It’s not worth it to us (to bid on the project).”
Bremer-Baumann also speculates that the PLA might reduce the number of contractors who bid on the airport project.
She said it is unfair for Harris’ workers to have to pay into union dues for the project when they are unlikely to take advantage of union benefits such as health care.
Riojas says that the contract allows open shops to hire five of their own people before going to the union for workers.
Wages would be the same whether the contractor is union or non-union. Because it is a government project, state laws mandate a pre-determined rate known as prevailing wage.

Do PLAs Drive Up Costs?

PLA opponents, such as the Coalition for Fair Employment in Construction, say PLAs increase construction costs by up to 15%. CFEC points to an industry-funded study as proof.
Alternatively, the State Building & Construction Trades Council presents studies that show the opposite — that PLAs help with efficiency and do not change costs.
Caprioglio said he was unaware of such studies and would be interested in seeing them.

Breakouts, Burns, Zingers: What to Watch in Democrats' Debates