Those are two of several suggestions John Dingell provided in his article in The Atlantic on how to fix the U.S. government.

Why does it need fixing?

Dingell cites the decline in the percentage of Americans who trust the federal government as the main reason.

“In December 1958, almost exactly three years after I entered the House of Representatives, the first American National Election Study, initiated by the University of Michigan, found that 73 percent of Americans trusted the federal government “to do the right thing almost always or most of the time,” Dingell writes. 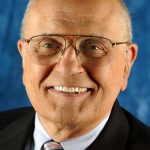 “With my own eyes, I’ve watched in horror and increasing anger as that imbalance in power has become the primary cause of our national legislative paralysis.” — John Dingell, former U.S. Representative

“As of December 2017, the same study, now conducted by the nonpartisan Pew Research Center, found that this number had plummeted to just 18 percent.”

Doing away with the Senate is one suggestion Dingell believes will help restore confidence and trust in “our precious system of government.”

But why abolish the Senate?

The way Dingell sees it, the upper chamber of the U.S. Congress gives small states like Rhode Island a disproportionate influence.

“California has almost 40 million people, while the 20 smallest states have a combined population totaling less than that,” Dingell said. “Yet because of an 18th-century political deal, those 20 states have 40 senators, while California has just two.”

Dingell believes those sparsely populated, usually conservative states, can block legislation supported by a majority of the American people.

“With my own eyes, I’ve watched in horror and increasing anger as that imbalance in power has become the primary cause of our national legislative paralysis,” Dingell said.

“Public service should not be a commodity, and elected officials should not have to rent themselves out to the highest bidder in order to get into (or stay in) office,” Dingell said.

Click here to read Dingell’s other suggestions on what he believes will fix the U.S. government.