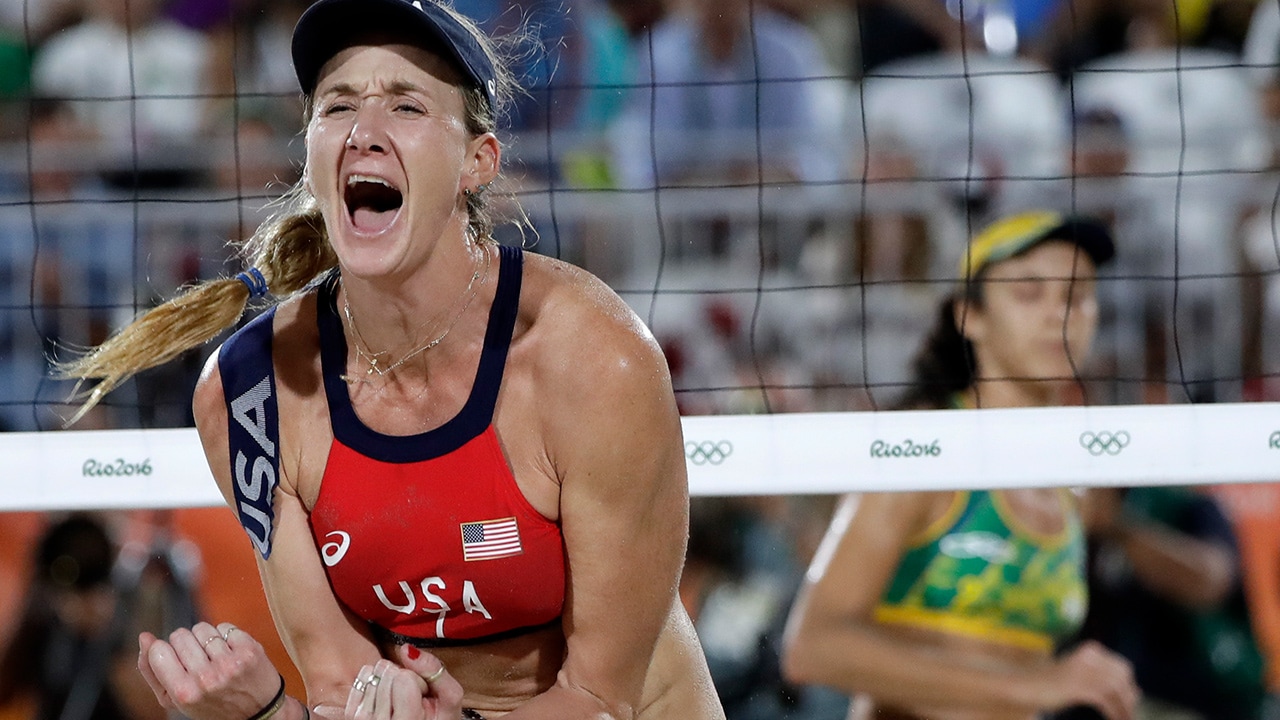 ALAMEDA — Kerri Walsh Jennings will call it a career in beach volleyball after the Tokyo Olympics in two years.
She has big plans before her days on the sand are done, and for improving the long-term health and growth of the sport well into the future by creating new playing opportunities in the U.S.
The three-time Olympic gold medalist absolutely expects to go out with another gold around her neck from the 2020 Games after she and partner April Ross wound up with bronze at Rio in 2016, a heartbreaking disappointment that still stings for Walsh Jennings yet fuels her at the same time.


“I think I would have retired if we won gold in Rio. This is my platform. I’m not done with my platform. That loss is going to serve me in so many different ways.” — Kerri Walsh Jennings, three-time Olympic gold medalist
“I haven’t shouted it from the mountaintops,” Walsh Jennings said Thursday of her career timeline in a wide-ranging interview with The Associated Press.
It may sound like a daunting task ahead: Walsh Jennings will turn 42 during the next Olympics. She has yet to settle on a partner though she has narrowed down her choice to two women. She is also coming off a pair of surgeries last year on her right shoulder and left ankle.
Just three weeks ago she began using the shoulder to hit the ball with her usual power and motion.
“I have no partner. I just came off two surgeries, and I know I’m going to win gold in Tokyo,” she said emphatically of her Olympic hurrah despite her share of lows in recent years. “… It makes this one and this journey that much more meaningful.”

She is back home in the Bay Area to promote her upcoming beach volleyball extravaganza — “it’s a movement” she says — to be held at the San Jose Earthquakes’ Avaya Stadium in late September.
The “p1440” event featuring volleyball, health and wellness resources and opportunities, music, kids’ experiences and much more will go Sept. 28-30. Tickets went on sale Thursday, and additional events are scheduled for Las Vegas, San Diego and Huntington Beach this year and four more cities in 2019.
Walsh Jennings and husband Casey are committed to living each day to the fullest, all 1,440 minutes, inspiring the name.
“It’s all about living in the moment,” she said. “I certainly need to practice what I preach. It’s knowing what I want in life.”
They have long wanted to have their own academy, and now p1440 will combine a competition environment with opportunities for personal development no matter someone’s fitness level or physical challenge with the support of sports psychology and a technology platform and educational tools.

Living in Her Strengths

Walsh Jennings is striving to be her best every day and is driven to “live in my strengths,” whether that means being present for her husband and three children, dealing with her failures as well as her triumphs, or remembering to take a moment each morning and night to remind herself what she is most grateful for in her life.
After failing to win gold in Rio, Walsh Jennings struggled to find her top form because she was “living in fear on the court.” Even after earning bronze in ’16, she carried the weight of her defeat with her for months and years. That had never happened before.
Now, at last, she has come through that. With help from those close to her each step of the way, of course.
“We are pure positivity,” she said. “I really do believe happiness is a choice. I really believe staying positive is a choice.”
She had a falling out with the domestic professional tour AVP at the end of 2016 and has since ventured out on her own by taking on the formation of p1440 with huge aspirations of making it stick as a viable option for professionals.
Walsh Jennings insists volleyball can be a sport that has a far greater reach than just the every-four-years Olympic chase when people tend to tune in to see one of the Summer Games’ most popular events.
That’s why Walsh Jennings believes she still has so much to give in beach volleyball and far beyond.
Losing in Rio while “performing terribly” has changed Walsh Jennings. She has learned from it and become better for it.
“It’s so liberating when your weaknesses are exposed,” she said, “when you live your worst nightmare and survive.”