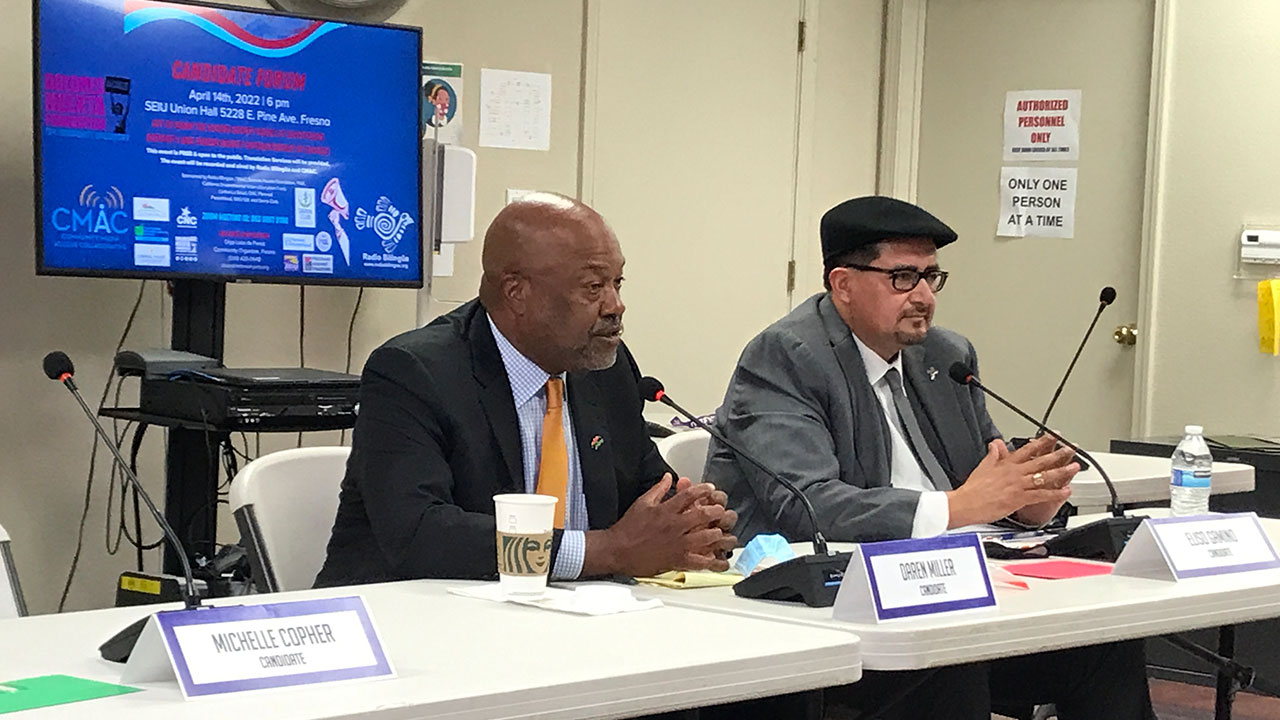 Michelle Cantwell-Copher, who is running for Fresno County Superintendent of Schools, was a no-show at Thursday’s candidate forum in the SEIU union hall in southeast Fresno. A forum organizer said Copher called shortly before the scheduled 6 p.m. start to say she would not be coming.

That left more time for candidates Daren Miller and Eliseo Gamino to answer a variety of questions, including how they would help keep rural schools open if enrollments continue to drop, and whether they support measures to slow climate change and “decarbonize” communities, raising the minimum wage to $18 per hour, and universal health care.

Miller alluded to the absent Cantwell-Copher when he urged the audience in the hall and watching virtually on Zoom to vote for the candidate who best represents their interests, and not one who is “willed” the job from a predecessor.

Actually, Mehas was elected to four terms starting in 1990. In 2006 Powell was elected for the first of three terms. When he retired in 2013, Yovino, then a deputy superintendent, was appointed by the county School Board to the position and then was elected to the first of his two terms. He initially had indicated that he would run for reelection this year but decided in January not to.

Yovino had already amassed a campaign treasury by then, and has made two $10,000 donations to Copher’s campaign, according to financial disclosure reports.

Cantwell-Copher is assistant superintendent for the educational leadership and development division in the Office of the Fresno County Superintendent of Schools. Gamino, a Raisin City Elementary teacher who ran against Yovino in the 2018 election, is a member of the Firebaugh-Las Deltas School Board. Miller is a Madera Unified educator.

Cart Before the Horse?

Fresno Unified’s Area 5 trustee seat has been vacant since the death last July of longtime Trustee Carol Mills, so understandably there may be some eagerness to fill it.

On next week’s School Board agenda is an item to declare certification of Tuesday’s special election in which Fresno State instructor and community organizer Andy Levine has a seemingly insurmountable lead over the other three candidates.

But there’s a catch — County Clerk James Kus tells GV Wire that he won’t be able to certify the election until April 29 at the earliest. Kus needs to wait for any lingering mail-in ballots to trickle in — the deadline for them to arrive is this Tuesday, a week after the election — and to sort out any provisional ballots and other questions.

Fresno Unified Board President Elizabeth Jonasson Rosas said the agenda item was somewhat of wishful thinking, in case the election could have been certified prior to Wednesday’s meeting. Barring any delays, the certification and swearing-in of the winner could be at the May 4 board meeting.

Fresno State junior Ana Bertozzi has claimed another big win — this time as the 2022 Big 12 Equestrian Scholar-Athlete of the Year. 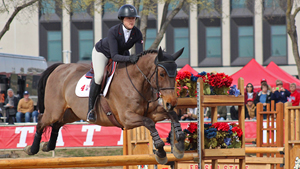 Bertozzi is the first Bulldog to win the honor, which the conference announced Tuesday, since Fresno State joined the Big 12 in 2019. She’s an animal science major with an emphasis in pre-veterinary studies who has maintained a 4.0 grade-point average while competing in 100% of Fresno State’s meets this year, where she earned six fences wins and five flats wins. (School Zone is informed that fences involve jumping and flats do not. School Zone in her younger days rode horses but only with a Western saddle, and any jumping was purely accidental and did not involve fences. But she was known to run a speedy barrel race back in the day.)

Bertozzi was named an Academic All-Big 12 honoree last year and this year.

She and her teammates were in Ocala, Fla. this week for the 2022 National Equestrian Championship. On Thursday they lost to Oklahoma State in the quarterfinals by a score of 12 to 8.

Big news for Fresno State alum Anthony Cody, who was one of 10 writers selected for the 2022 Whiting Award. The awards are given to young, promising authors whose work already shows great distinction.

The selection committee called Cody’s poetry “invigorating” and said his writing “has enlarged what’s possible for American poetry,” according to a university news release.

Cody accepted his award and the $50,000 that comes with it in New York City on April 6.

Fresno State says Cody is the most highly honored writer in the 25-year history of the university’s master of fine arts program in creative writing. His first book of poetry, “Borderland Apocrypha,” which was published a month before he completed his MFA degree in 2020, won the 2018 Omnidawn Open Book Contest and went on to win an American Book Award, a Los Angeles Times Book Award in Poetry and a Southwest Book Award. It was also a finalist for the National Book Award in Poetry and a finalist for the PEN America Jean Stein Award.

Cody graduated from Fresno State with a bachelor’s degree in liberal studies in 2004.

Brynn Saito, an assistant professor of English who served as Cody’s thesis mentor, called his Whiting Award “incredibly inspiring, especially for writers who are innovating aesthetic forms to confront histories of state violence committed against communities of color.”

Hey students, are you interested in learning how to make documentary films? The Community Media Access Collaborative, also known as CMAC, is now accepting applications for the third annual Youth Voices program.

The 14-week program is for junior and senior high school students ages 18 and younger. CMAC provides professional video equipment, mentorship, and instruction, but the students will be in charge of deciding what stories they want to tell in their documentary.

Participants will receive a $1,000 stipend and a one-year CMAC membership, which provides access to the collaborative’s equipment and training opportunities. The program’s underwriter is The California Endowment.

Applications will be accepted through May 2. For more information and to apply, go to CMAC’s website at www.cmac.tv/youthvoices.

CMAC is hosting a virtual Q&A session at 5 p.m. on April 21 to answer questions about the program and application process. RSVP to the Q&A session here. 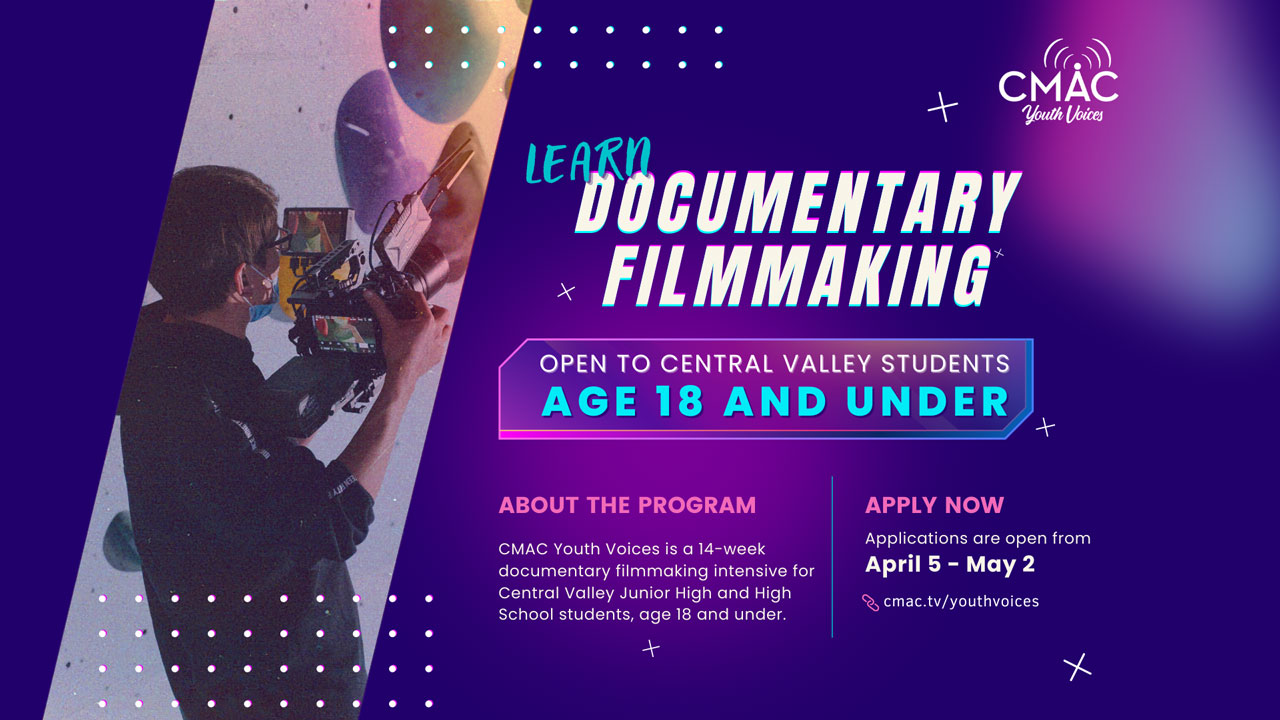 Related Topics:Fresno County Superintendent of SchoolsFresno UnifiedSchool Zone
Up Next

Forecast Calls for Light Rain in Fresno, Snow in the Sierra