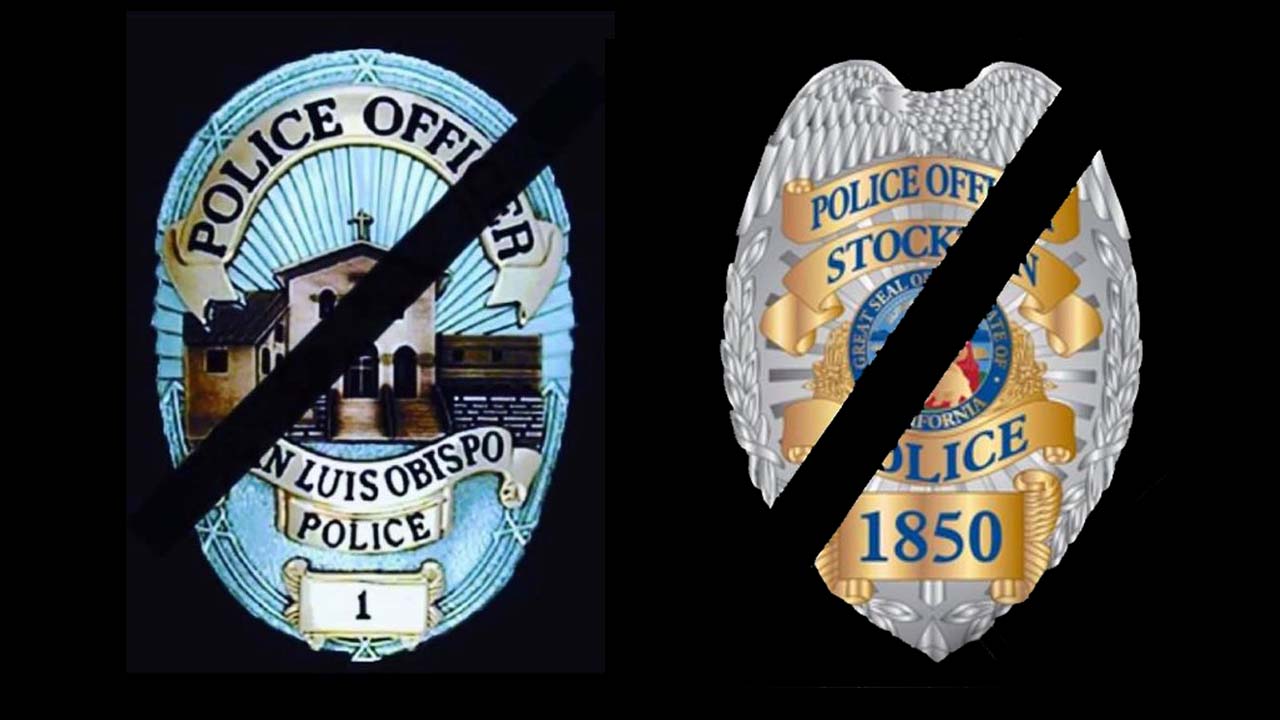 Police officers in Stockton and San Luis Obispo were shot and killed, and a third was wounded within 24 hours in two separate incidents, authorities said Tuesday.

A Stockton Police Department officer was fatally shot Tuesday morning, police said in a Twitter post. A male suspect was also shot and killed in the incident.

The deaths occurred during National Police Week, an annual event that honors law enforcement officers who were killed or disabled in the line of duty.

Jimmy Inn was identified as the slain Stockton officer. He was fatally shot while responding to a domestic violence incident, Stockton Police Chief Eric Jones said in a news conference.

In Stockton, police dispatchers received a call around 9:45 a.m. Tuesday reporting a domestic disturbance. The caller reported hearing screaming and seeing a woman wearing a ripped shirt and bleeding. She appeared to have been assaulted.

Inn arrived at the home at 10:07 a.m. and was shot almost immediately in front of the home by a male suspect, Jones said.

“It was a violent, blatant, and very sudden assault on our police officer,” the chief said.

A second officer, whose name was not released, arrived and exchanged gunfire with the suspect. The suspect then went into the home and returned moments later holding a young child.

The suspect began to strangle the child, an 8-year-old boy, Jones said. The officer opened fire again as a bystander tackled the suspect.

The suspect’s name has not been released. He died at the hospital. It was not immediately clear what relationship he had with the woman and the child.

Inn, 30, is survived by his wife, who is also a Stockton police officer, as well as a 7-month old son, 12-year-old stepdaughter, and a 14-year-old stepson.

He was hired by the department in December 2015, Jones said.

Remembered as an optimistic officer who was popular in the department, Inn was assigned to the Field Operations Division and served in the honor guard.

Detective Steve Orozco was injured in the San Luis Obispo shooting, police said. He was released from a hospital and is expected to recover from his wounds. 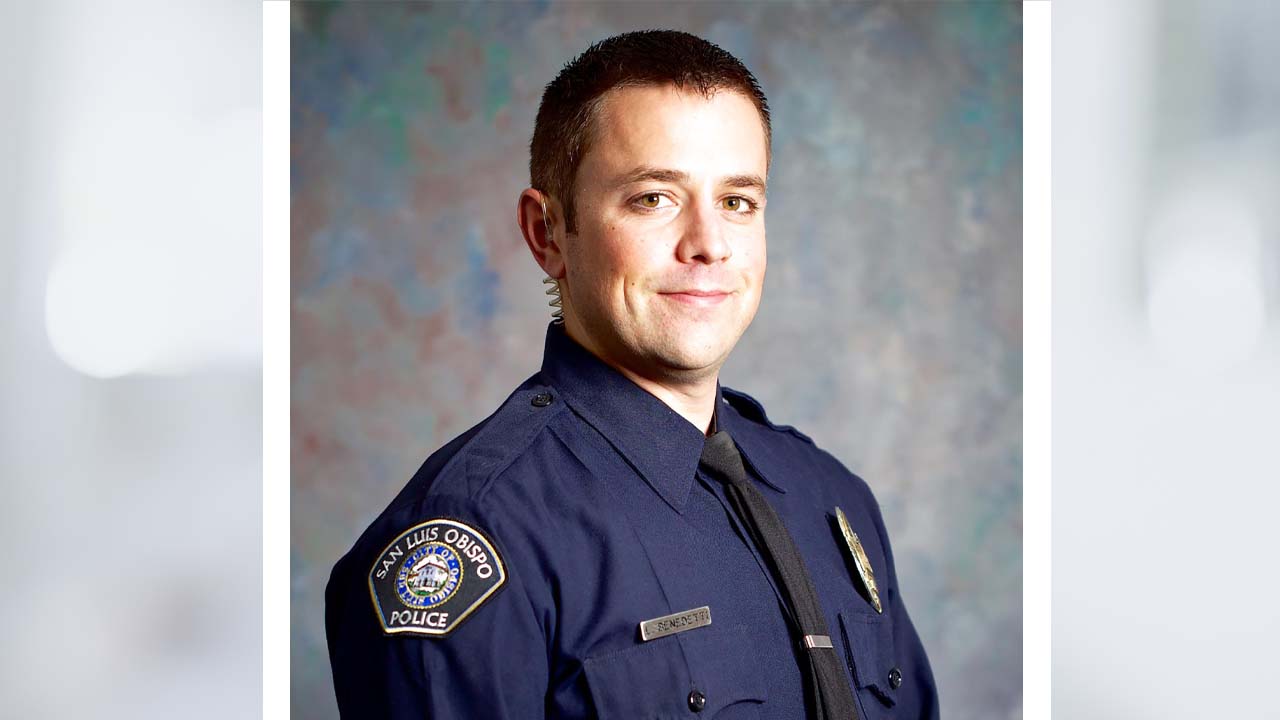 This undated photo provided by the San Luis Obispo, Calif., Police Department shows San Luis Obispo Police Det. Luca Benedetti, who was shot and killed while serving a search warrant, Monday, May 10, 2021, in a shootout in the Central Coast city, officials said Tuesday afternoon, May 11, 2021. A second officer, Det. Steve Orozco, who was injured in the shooting was released from the hospital and is expected to recover from his wounds. (San Luis Obispo Police Department via AP)

Benedetti, a 12-year law enforcement veteran, was fatally injured in a shootout in an apartment, officials said during a news conference. Benedetti and five other officers had been at the apartment for an investigation into items stolen in a string of late-night commercial burglaries.

Police said gunman Edward Zamora Giron had been lying in wait inside the apartment and fired at the officers before shooting and killing himself. He also had wounds sustained in the shootout. Police initially said that he had been killed by officers’ fire.

Officers arrived at the apartment around 5 p.m. to serve the warrant, seeking the stolen property from the commercial burglaries over the past week, said Brian Amoroso, acting chief of the police department.

The officers knocked and announced themselves, Amoroso said, but there was no response from inside the apartment. They forced the door open and found Giron inside.

Giron opened fire, and the officers began retreating and shooting back, Amoroso said. Benedetti and Orozco were struck in the gunfire, as was Giron.

San Luis Obispo County Sheriff Ian Parkinson said Giron had a criminal history involving mostly alcohol, drug, and property offenses, but nothing violent. Giron did not have any registered firearms, and authorities were not aware of any mental illnesses he may have had, the sheriff said.

Benedetti had worked for the San Luis Obispo Police Department since 2012, after serving at the Atascadero Police Department for four years. He was a member of the regional SWAT team. The 37-year-old is survived by his wife and two young children.

“This is a tragedy beyond measure for all of those who serve and care about our community,” City Manager Derek Johnson said in a statement. “Our deepest condolences go out to the family. We are devastated by this loss.”

Victoria Torres, 21, told the San Luis Obispo Tribune that she was upstairs in her bedroom when she heard “a very loud knocking” at an apartment across from her.

“I don’t know if it was the police or what,” she said. “I always hear noises here, so I didn’t think anything of it until I heard the gunshots.“

She looked out her window and saw a police car, then walked downstairs and looked out another window.

Torres said she saw a man carrying a “big gun” who began shooting from the door of an apartment at officers who were hiding behind their patrol car.

Torres went back upstairs to hide and call 911.

Monica Rochte, 31, told the Tribune that she heard police banging on an apartment door and saying: “’We’re going to come in. We know you’re in there.’ ”

Rochte said there was yelling and then a bang that she thought might be police knocking down the door, followed by a single shot.