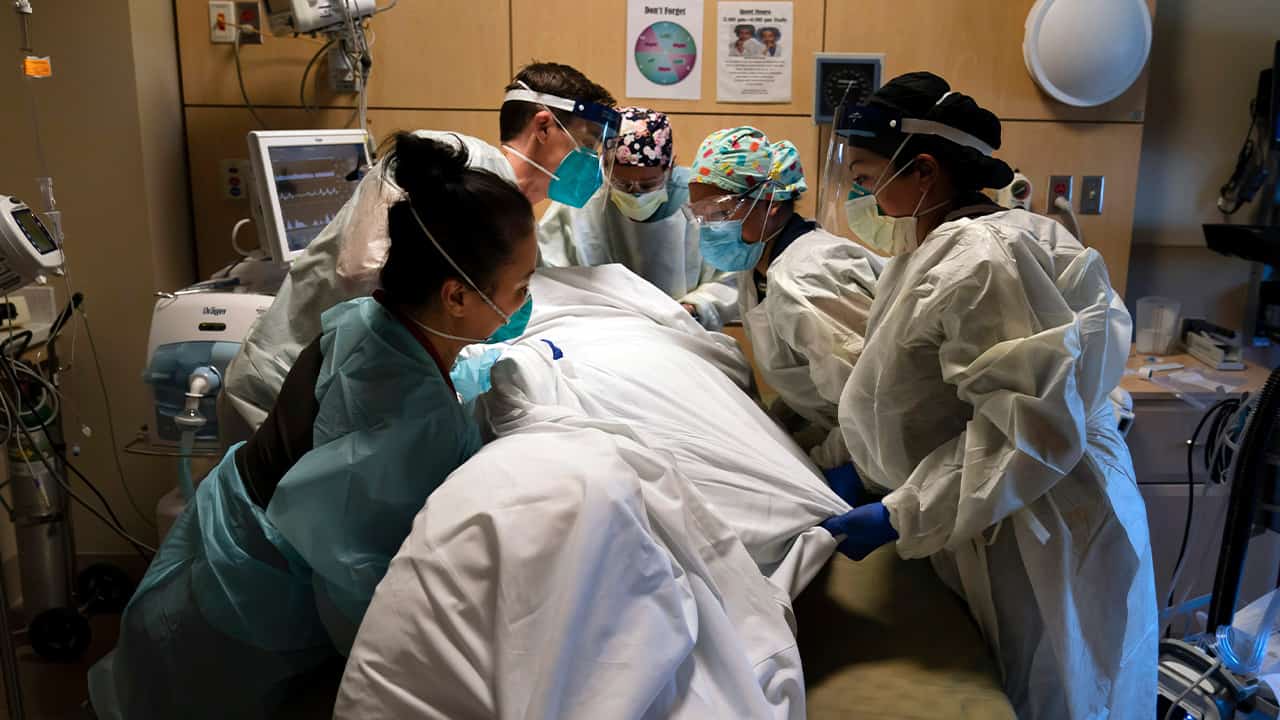 LOS ANGELES — Hospitals across California have all but run out of intensive care beds for COVID-19 patients, ambulances are backing up outside emergency rooms, and tents for triaging the sick are going up as the nation’s most populous state emerges as the latest epicenter of the U.S. outbreak.

On Thursday, the state reported a staggering 52,000 new cases in a single day — equal to what the entire U.S. was averaging in mid-October — and a one-day record of 379 deaths. More than 16,000 people are in the hospital with the coronavirus across California, more than triple the number from a month ago.

While the surging virus has pushed hospitals elsewhere around the country to the breaking point in recent weeks, the crisis is deepening with alarming speed in California, even as the nationwide rollout of COVID-19 vaccinations this week and the impending release of a second vaccine have boosted hopes of eventually defeating the scourge.

Intensive care unit capacity is at less than 1% in many California counties, and morgue space is also running out, in what is increasingly resembling the disaster last spring in New York City.

At St. Mary Medical Center in Southern California’s Apple Valley, patients are triaged outside in tents, and the hospital put up temporary walls in its lobby to make more room to treat those with COVID-19. Patients are also being treated in the halls on gurneys or chairs, sometimes for days, because there is nowhere else to put them, said Randall Castillo, the hospital’s chief executive.

Dr. Nasim Afsar, chief operating officer at UCI Health in Orange County, described an unrelenting churn of patients, many of them left to wait in the ER until a bed elsewhere in the hospital opens up.

“Every day we work through and we discharge the appropriate number of people, and by the next day all of those beds are again filled up,” she said. “Where the bottleneck is is the large number of patients who come to the emergency room and need to be admitted and there’s not a bed for them.”

Dr. Denise Whitfield, an emergency room physician at Harbor-UCLA Medical Center, said ambulance crews are left waiting around for patients to be seen.

“Over the last nine months that we’ve been dealing with this COVID pandemic, I can say that it’s been the worst that I’ve seen things in terms of looking at our capacity to care for our patients,” she said.

Authorities plan to erect field hospitals in multiple locations in the state, with three set to go up in Orange County.

Around the country, other hospitals are likewise parking patients in ERs because they have run out of ICU beds, and also moving adults into pediatric hospitals and bringing in staff from out of state to treat them in makeshift wards.

Doctors are being forced to make tough decisions to manage the caseload. Some hospitals are sending lower-risk COVID-19 patients home with supplemental oxygen and monitoring machines to free up beds for the seriously ill.

Some states are preparing for the possibility of rationing care if hospitals are further swamped. If a hospital doesn’t have enough ventilators, for example, doctors would have to make the agonizing decision about which patients should get them.

Idaho’s top public health leaders last week cleared the way for the state to resort to rationing — or impose what are called crisis standards of care — if necessary. Hospitals would have to use limited resources to provide potentially life-saving treatment to the patients most likely to survive.

Hospitals Have Had to Turn Down Transfers From Outside the Area

In Texas, many intensive care units are either full or approaching capacity. On Wednesday, authorities reported having just over 700 ICU beds open across the entire state.

In St. Louis, where intensive care units are about 90 percent full, hospitals have had to double up patients in ICU rooms and pull nurses out of the operating room so they could help with intensive care patients, said Dr. Alex Garza, head of the St. Louis Metropolitan Pandemic Task Force.

Hospitals have had to turn down transfers from outside the area, and in at least one case, a patient was flown to Illinois because no ICU beds were available in the St. Louis area, he said.

Garza said overworked health care workers can only keep this up for so long: “You are just going to burn them out or you’re going to make them sick or something is going to happen.”

California’s hospitalizations are now are double the summertime peak. The state has brought in more than 500 extra staff and deployed them around the state, though most don’t have the skills to help in ICUs. The state is seeking a total of 3,000 contracted medical staff members.

Fresno County’s hospital system is under so much strain that officials hired an outside team of 31 doctors, nurses and support staff to help treat patients in a makeshift ward.

In the farm-heavy Central Valley, where hospital space is dwindling fast, health officials say the heavily Latino and migrant farmworker region is burdened by a lack of access to transportation and health care; higher rates of disease, mistrust of medicine; crowded, multigenerational households; and jobs that do not allow people to work from home.

“They’re front-line workers, they work in our grocery stores, they work in sanitation. They cannot stay at home. They don’t have the luxury of work at home,” Dr. Piero Garzaro, an infectious-disease specialist at Kaiser Permanente Central Valley. “How can you isolate when you live in a 1,000-square-foot apartment when there are five people there, including Grandpa and Grandma?”