Biden Pushes Closer to Victory in Race for the White House 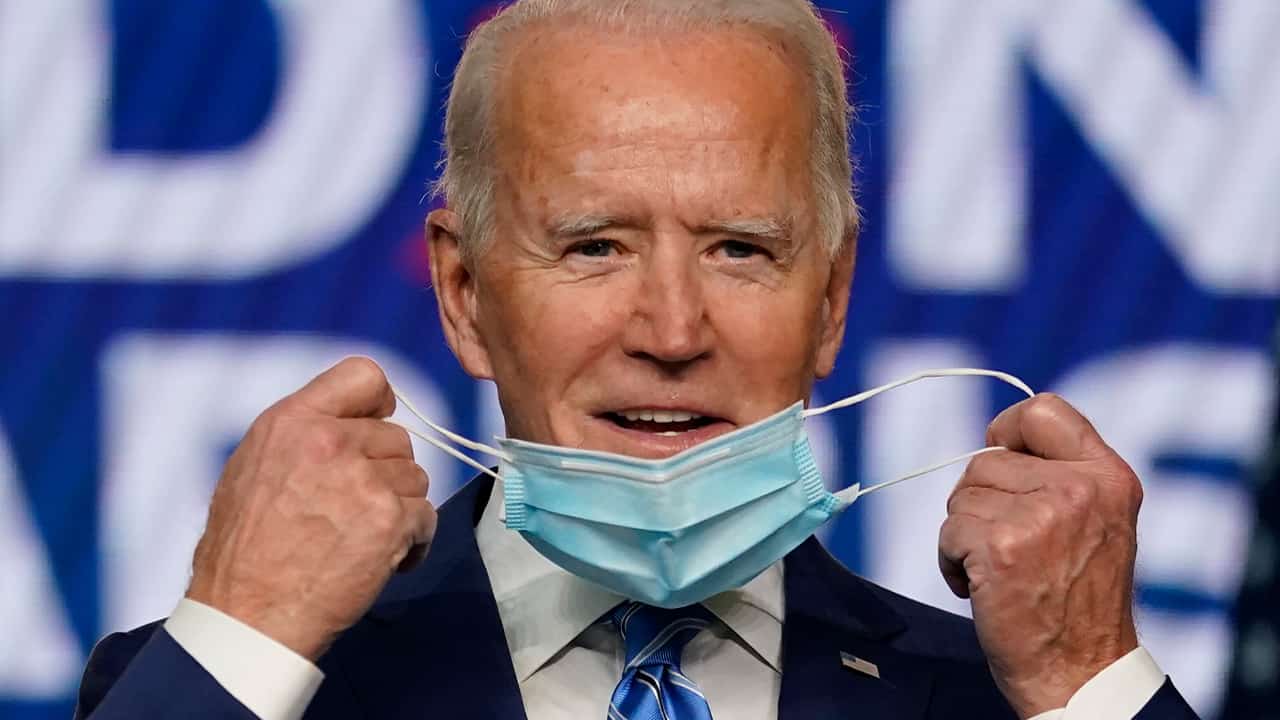 With just a handful of states still up for grabs, Trump tried to press his case in court in some key swing states. It was unclear if any of his campaign’s legal maneuvering over balloting would succeed in shifting the race in his favor.

Two days after Election Day, neither candidate had amassed the votes needed to win the White House. But Biden’s victories in the Great Lakes states left him at 264, meaning he was one battleground state away — any would do — from becoming president-elect.

Trump, with 214 electoral votes, faced a much higher hurdle. To reach 270, he needed to claim all four remaining battlegrounds: Pennsylvania, North Carolina, Georgia and Nevada.

With millions of votes yet to be tabulated, Biden already had received more than 71 million votes, the most in history. At an afternoon news conference Wednesday, the former vice president said he expected to win the presidency but stopped short of outright declaring victory.

“I will govern as an American president,” Biden said. “There will be no red states and blue states when we win. Just the United States of America.”

Trump, in contrast, was escalating his efforts to sow doubt about the outcome of the race. A day after falsely claimed that he had won the election, he voiced support Thursday for ceasing the tallying of legally-cast votes in a tweet, saying, “STOP THE COUNT!” He later falsely asserted that ballots received after Election Day “will not be counted,” a move that if implemented would affect military ballots, as his campaign propagated baseless allegations of fraud.

Elections are run by individual state, county and local governments and Trump’s public comments have no impact on the tallying of votes across the country.

Trump’s campaign engaged in a flurry of legal activity to try to improve the Republican president’s chances and cast doubt on the election results, requesting a recount in Wisconsin and filing lawsuits in Pennsylvania, Michigan and Georgia. Statewide recounts in Wisconsin have historically changed the vote tally by only a few hundred votes; Biden led by more than 20,000 ballots out of nearly 3.3 million counted.

Biden has an edge over Trump after victories in Wisconsin and Michigan, two key Midwestern battleground states. Contests in Georgia, Pennsylvania, Nevada and North Carolina were tight with votes still being tabulated.

The Trump campaign said it was confident the president would ultimately pull out a victory in Arizona, where votes were also still being counted, including in Maricopa County, the state’s most populous area. The AP has declared Biden the winner in Arizona and said Thursday that it was monitoring the vote count as it proceeds.

“The Associated Press continues to watch and analyze vote count results from Arizona as they come in,” said Sally Buzbee, AP’s executive editor. “We will follow the facts in all cases.”

For four years, Democrats have been haunted by the crumbling of the blue wall, the trio of Great Lakes states — Michigan, Wisconsin and Pennsylvania — that their candidates had been able to count on every four years. But Trump’s populist appeal struck a chord with white working-class voters and he captured all three in 2016 by a combined total of just 77,000 votes.

The candidates waged a fierce fight for the states this year, with Biden’s everyman political persona resonating in blue-collar towns while his campaign also pushed to increase turnout among Black voters in cities like Detroit and Milwaukee.

Trump Spent Much of Wednesday and Thursday, Huddling With Advisers and Fuming

It was unclear when a national winner would be determined after a long, bitter campaign dominated by the coronavirus and its effects on Americans and the national economy. But even as Biden’s prospects improved, the U.S. on Wednesday set another record for daily confirmed coronavirus cases as several states posted all-time highs. The pandemic has killed more than 233,000 people in the United States.

Trump spent much of Wednesday and Thursday in the White House residence, huddling with advisers and fuming at media coverage showing his Democratic rival picking up battlegrounds. Trump used his Twitter feed to falsely claim victory in several key states and amplify unsubstantiated conspiracy theories about Democratic gains as absentee and early votes were tabulated. Aides did not say when he next planned to appear in public.

Trump campaign manager Bill Stepien said the president would formally request a Wisconsin recount, citing “irregularities” in several counties. And the campaign said it was filing suit in Michigan and Pennsylvania to halt ballot counting on grounds that it wasn’t given proper access to observe. Still more legal action was launched in Georgia, and Trump campaign spokesman Jason Miller said additional legal action was expected in Nevada.

“We will literally be going through every single ballot,” he said of the hotly contested state.

At the same time, hundreds of thousands of votes were still to be counted in Pennsylvania, and Trump’s campaign said it was moving to intervene in existing Supreme Court litigation over counting mail-in ballots there.

In other closely watched races, Trump picked up Florida, the largest of the swing states, and held onto Texas and Ohio while Biden kept New Hampshire and Minnesota.

Beyond the presidency, Democrats had hoped the election would allow the party to reclaim the Senate and pad its majority in the House. But while the voting scrambled seats in the House and Senate, it ultimately left Congress much like it began — deeply divided.

The candidates spent months pressing dramatically different visions for the nation’s future, including on racial justice, and voters responded in huge numbers, with more than 100 million people casting votes ahead of Election Day.

Trump, in an extraordinary move from the White House, issued premature claims of victory and said he would take the election to the Supreme Court to stop the counting.

Senate Majority Leader Mitch McConnell discounted the president’s quick claim of victory, saying it would take a while for states to conduct their vote counts. The Kentucky Republican said that “claiming you’ve won the election is different from finishing the counting.”

Vote tabulations routinely continue beyond Election Day, and states largely set the rules for when the count has to end. In presidential elections, a key point is the date in December when presidential electors meet. That’s set by federal law.

Dozens of Trump supporters chanting “Stop the count!” descended on a ballot-tallying center in Detroit, while thousands of anti-Trump protesters demanding a complete vote count took to the streets in cities across the U.S.

Several states allow mailed-in votes to be accepted after Election Day as long as they were postmarked by Tuesday. That includes Pennsylvania, where ballots postmarked by Nov. 3 can be accepted if they arrive up to three days later.

Trump appeared to suggest that those ballots should not be counted and that he would fight for that outcome at the high court. But legal experts were dubious of Trump’s declaration. Trump has appointed three of the high court’s nine justices including, most recently Amy Coney Barrett.

High Court Could Halt Move Toward Leniency for Kids Who Kill