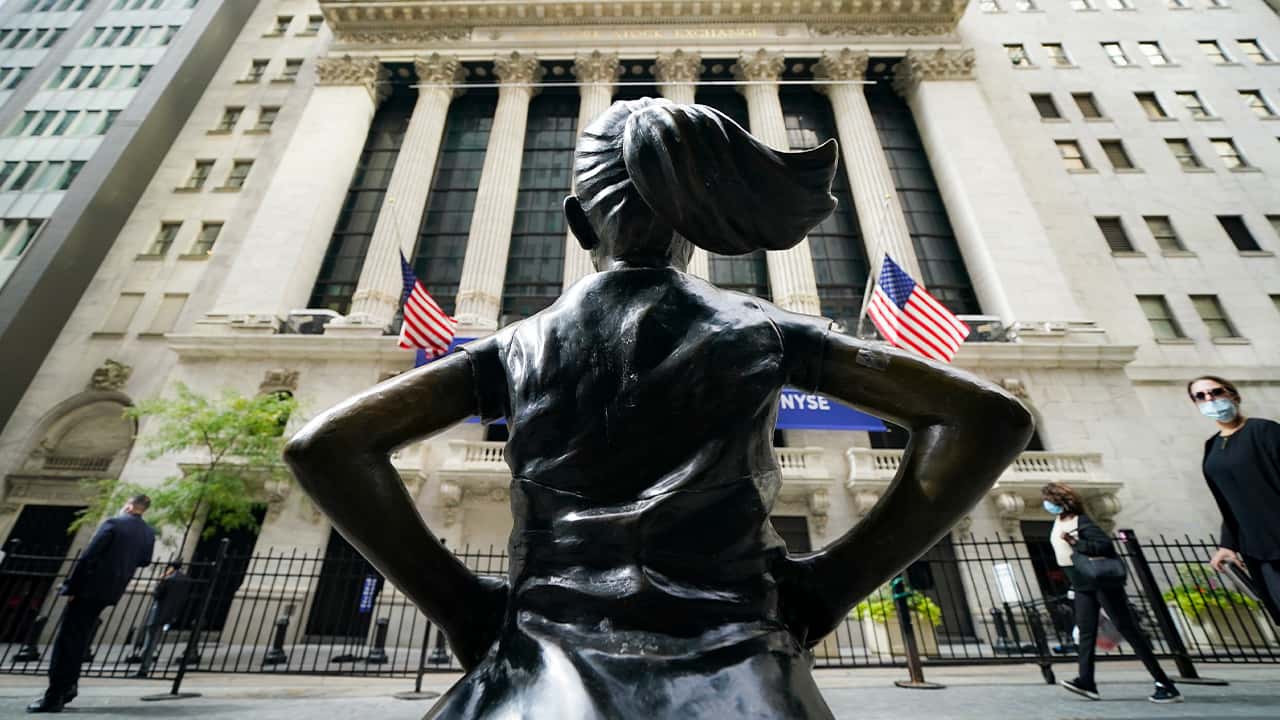 The S&P 500 fell 0.7% after spending the morning swaying between small gains and losses. Companies that rely on consumer spending, banks and technology and communication stocks bore the brunt of the selling. Trading in stock markets overseas was subdued as coronavirus counts climb around the world, raising the risk of more government restrictions on businesses. Treasury yields fell, while prices for crude oil and gold rose.

The decline came as talks between Democrats and Republicans in Washington over another economic stimulus package continued to drag on, dimming investors’ hopes for a deal that can deliver more aid for the U.S. economy in the near term.

Treasury Secretary Steven Mnuchin and House Speaker Nancy Pelosi spoke by phone again Wednesday morning but didn’t reach an agreement, Pelosi aide Drew Hammill tweeted, adding that the two plan to speak again Thursday. Mnuchin said at a conference sponsored by the Milken Institute that it would be “difficult” to get a deal done before the presidential election next month.

“The time for being able to pull this off is now coming to a close,” said Rod von Lipsey, managing director at UBS Private Wealth Management. “The market has been listless because it understands that it’s probably not going to happen.”

Investors are still anticipating some kind of an aid package eventually passing, he said, but it will now likely wait until after the election.

Despite the market’s two-day slide, stocks have been mostly pushing higher this month. About halfway through October, the major stock indexes have recouped most of their losses from last month’s market swoon.

Even so, this week’s kick-off to earnings reporting season is painting a mixed picture for investors.

Big banks are traditionally the first companies to tell investors how much profit they made in the prior quarter, and Bank of America and Wells Fargo fell following the release of their reports, posting the biggest losses in the S&P 500. Bank of America sank 5.3% after its revenue fell short of analysts’ forecast, while Wells Fargo dropped 6% after its earnings were lower than Wall Street expected.

Across the S&P 500, analysts are expecting companies to report another drop in profits for the summer from year-ago levels. But they’re forecasting the decline to moderate from the nearly 32% plunge from the spring as the economy has shown signs of improvement.

The sharpest profit drops for the quarter are expected to come from energy stocks, but the sector rose Wednesday to some of the biggest gains among the 11 that make up the S&P 500 index. A 2.1% rise for crude oil prices helped. So did a report that ConocoPhillips is in talks to buy Concho Resources. Concho jumped 10.2%, the biggest gainer in the S&P 500, following the report from Bloomberg News.

Because of their massive size, the movements of Big Tech stocks have an outsized effect on the S&P 500 and other indexes.

The yield on the 10-year Treasury note fell to 0.72% from 0.74% late Tuesday despite a report showing that inflation at the wholesale level strengthened more than economists expected last month.

The Federal Reserve has also indicated that it will keep interest rates at nearly zero for a while to support the economy, even if inflation hits its target level.

Aid for the economy from elsewhere in Washington, though, has been harder to come by. Hopes are fading that Congress and the White House can agree on another round of support any time soon.

“The cold reality that markets have refused to countenance is that even if an agreement was reached, its chances of being enacted before the November election are about zero,” said Jeffrey Halley of Oanda. “Still, this is 2020, the year where markets never let reality get in the way of a good story.”

Economists and the head of the Federal Reserve have said the economy will likely need such stimulus. Earlier benefits for laid-off workers and other support that Congress approved earlier this year have expired.

The rate at which Americans save money spiked earlier this year as the pandemic-related business shutdowns limited where people could shop. Thus far, that extra savings cushion has helped people who lost their job weather the loss of extra unemployment benefits, said Elyse Ausenbaugh, global market strategist at J.P. Morgan Private Bank.

“It’s not going to last forever, especially with the unemployment rate so high,” she said. “That really underscores the need for the government to gas the economy.”