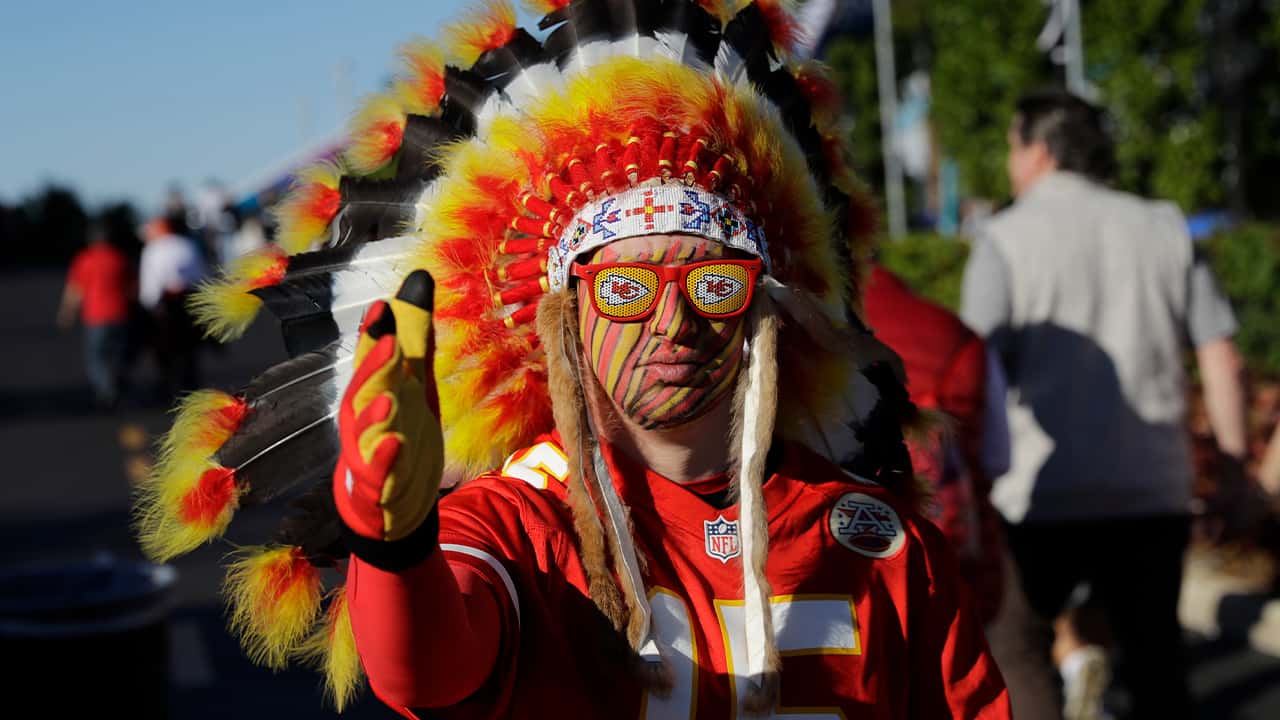 MISSION, Kan. — Kansas City Chiefs fans who file into Arrowhead Stadium Thursday for a masked and socially distanced start to the NFL season won’t be wearing headdresses or face paint amid a nationwide push for racial justice following the police-custody death of George Floyd in Minneapolis.

The move by the reigning Super Bowl champions has pleased Native Americans as a good first step, but frustrated some of the 17,000 fans who will be in the stands as the team becomes the first to take the field in front of a crowd — albeit a smaller than normal one — during the coronavirus pandemic. Enforcing the new restrictions also comes as the team tries to require masks, which has proven challenging at some public practices.

NFL teams with Native American mascots are facing increased scrutiny after the team in Washington chose to drop Redskins as its nickname after a long and often contentious dialogue with fans and the public. The Chiefs also announced last month that the team was discussing the future of its tomahawk chop celebration amid complaints that it’s racist.

Students at nearby Haskell Indian Nations University in Lawrence, Kansas, are among those who demanded changes.

“Using this mascot and having this fan base of predominantly white people wearing face paint and headdresses and doing the tomahawk chop, and it energizes them and gives them this sense of power, and then thinking there is nothing wrong with doing that is just mind boggling to me,” said William Wilkinson, Haskell’s former University Student Government Association president. FILE – In this Feb. 2, 2020 file photo, Kansas City Chiefs fans arrive for the NFL Super Bowl 54 football game between the Chiefs and the San Francisco 49ers, in Miami Gardens, Fla. The Kansas City Chiefs fans who file into Arrowhead stadium Thursday, Sept. 10, 2020 for a masked and socially distanced start to the current season won’t be wearing headdresses or face paint amid a nationwide push for racial justice following the death of George Floyd in Minneapolis. (AP Photo/Chris O’Meara File)

‘It Has Never Been Meant To Be Disrespectful at All’

Wilkinson, who is Navajo, Cherokee, Mandan, Hidatsa and Arikara, said that eventually the team nickname also must change.

“It dehumanizes us and gives us Native Americans this picture of being this savage beast that is hungry for fighting when in real life we are nothing like that,” said the 22-year-old business major from Madison, Wisconsin.

Ty Rowton, a self-described superfan who goes to games as the X-Factor, dressed with an Arrowhead on his head, beads and a cape signed by players, has made one change to his costume. Instead of face paint, he will stick Duct tape with Bible verses on his face.

He was stopped by security when he wore the getup for a training camp practice but said he has since gotten clearance for the ensemble. Still, he thinks the team’s changes are an overreaction and said fans love to pose with people wearing headdresses. He also thinks the team also should keep the tomahawk chop.

“It is something that gets us riled up together and that we do as one. It has never been meant to be disrespectful at all,” he said.

Gaylene Crouser, executive director of the Kansas City Indian Center, said it’s wrong to use “a race of people as a mascot.” Her group has demanded changes for years and she thinks the momentum may be shifting.

“It has always been swept under the rug, but because the Washington team was leaned on so hard that they made the change, now some of the other ones are starting to feel the heat,” she said. “I hope this is the beginning of the end of this acceptable racism.”

Calls to address racial issues have become more prevalent in the wake of Floyd’s death. Floyd, a Black man, died May 25 after a white Minneapolis police officer pressed his knee into the handcuffed Floyd’s neck for nearly eight minutes during an arrest over counterfeit money. The officer and three other officers were fired and have been charged in Floyd’s death.

Sixty-five-year-old fan Connie Jo Gillespie, who is a mix of East Woodland Shawnee, Plains Cree and Mississippi Chickasaw, supports banning the headdress but thinks the Chiefs name should stay. She considers herself a hardcore fan and praised efforts the team has made to work with national organizations that work closely on issues that affect Native Americans.

For example, the Chiefs celebrate American Indian Heritage Month by inviting elders to a game each year and having them do a ceremonial “Blessing of the Drum and the Four Directions of Arrowhead Stadium.”

‘Avengers’ and ‘Game of Thrones’ Star Diana Rigg Dies at 82