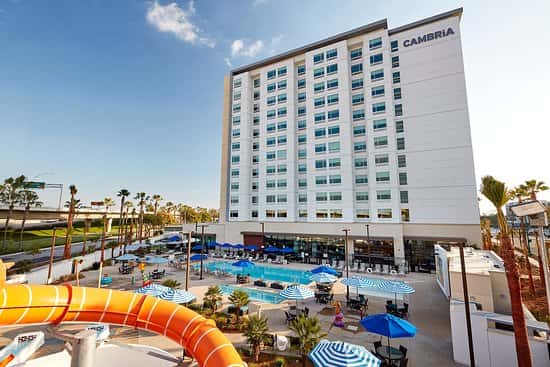 ANAHEIM — A brawl at a hotel near Disneyland on Wednesday involved as many as 100 people and two people were hospitalized, police said.

Broomsticks and bottles were used as weapons during the fight at the Cambria Hotel & Suites, witnesses and police said.

Police were called to the hotel shortly after 12:30 p.m. over a fight in the lobby, Sgt. Shane Carringer told the Orange County Register.

The officers “were met with about 40 people fighting outside” and another 50 to 60 people battling inside, Carringer said, describing the scene as “pandemonium.”

“It was men and women, adults and juveniles,” Carringer said.

Two People Were Taken to the Hospital With Minor Cuts

Dozens of officers cleared the scene. Two people were taken into custody

Two people were taken to the hospital with minor cuts and police went door-to-door in the hotel to check for others who might have been injured, KTLA-TV reported.

Raymond Brown, 11, told the station that the fight began when he playfully pushed his cousin into the hotel pool and the boy landed on some children, sparking threats of a fight from others that quickly drew in adults.

“Then they all went to the basketball court, and then we got in the hotel and they just started throwing bottles and stuff at us and then we started fighting,” he said.

The hotel is near Disneyland and Disney’s California Adventure. Both theme parks remain closed because of the coronavirus pandemic.