Poll Shows Nearly All in US Back Criminal Justice Reform 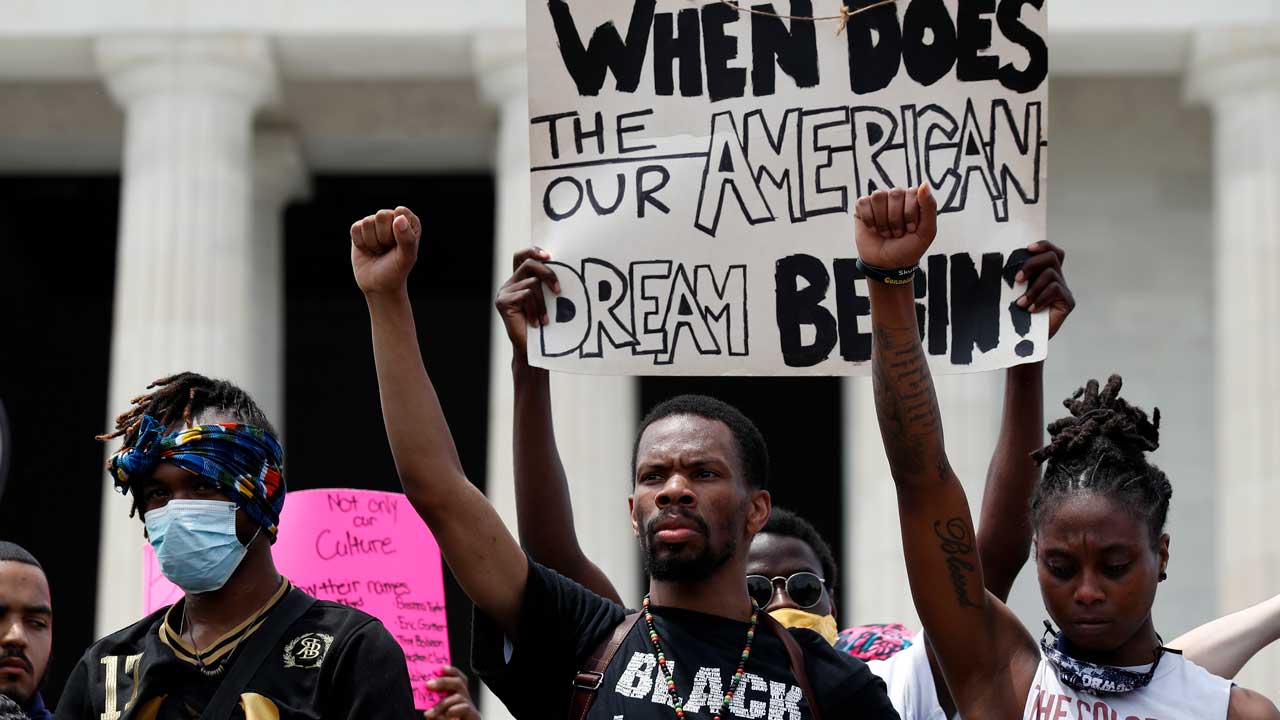 WASHINGTON — Americans overwhelmingly want clear standards on when police officers may use force and consequences for officers who do so excessively, according to a new poll that finds nearly all Americans favor at least some level of change to the nation’s criminal justice system.
The new poll from The Associated Press-NORC Center for Public Affairs Research also finds there is strong support for penalizing officers who engage in racially biased policing. Americans are more likely now than five years ago to say that police violence against the public is a very serious problem and that officers who cause injury or death on the job are treated too leniently.
“For me, as a Black person, I’m like, this has been happening,” said Kevin Richardson, 38, of Charlotte, North Carolina. “We should’ve been knowing it, we should’ve been seeing this and so now what’s happened is, I’ll be honest, white people are seeing it and saying, ‘This is wrong.’”

Just 5% Say No Changes are Needed

The survey of American adults took place after weeks of mass demonstrations against police violence and calls from some politicians and activists to “defund” departments in response to the death of George Floyd, a Black man who died in custody after a white Minneapolis officer pressed his knee into Floyd’s neck for nearly eight minutes.
Americans are largely united behind the idea that action is required: 29% think the criminal justice system needs “a complete overhaul,” 40% say it needs “major changes” and 25% say it needs “minor changes.” Just 5% believe no changes are necessary.
Megan Pecknold, 33, of Spokane, Washington, said the protests have forced her to think about these issues in a way she had the luxury, as a white person, of previously ignoring.
“I had never really given much thought to police use of force. I’m white. I’ve never had a bad encounter with a police officer,” she said. “The last few months have brought to light more of this for me, and now I am educating myself.”

Nearly 6 in 10 Black Americans think the criminal justice system needs a complete overhaul, compared with about a quarter of white Americans who said the same. About 4 in 10 white Americans say major changes are needed; 3 in 10 prefer minor changes.
While Democrats are more likely than Republicans to think the system needs an overhaul, 44% to 12%, Americans across party lines are nearly unanimous in thinking at least some change is necessary. Another 44% of Democrats think major changes are necessary. Among Republicans, 34% call for major changes and 47% for minor changes. 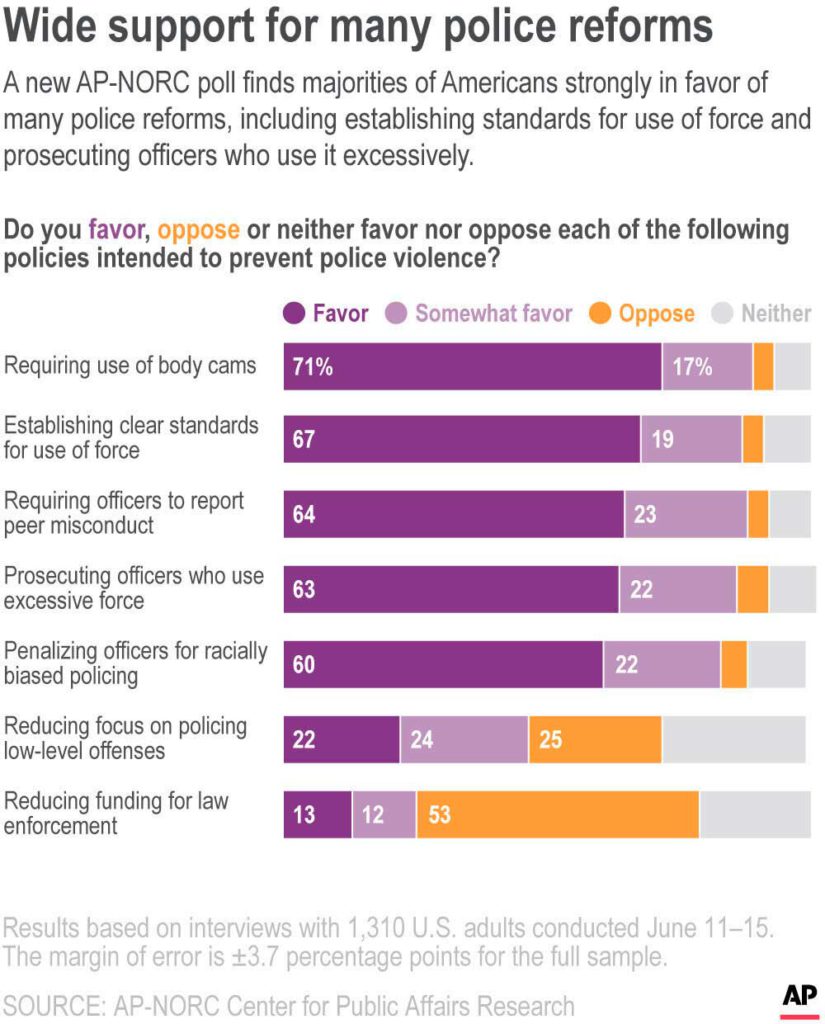 The poll finds overwhelming support for changes in how police departments operate: requiring officers to wear body cameras, establishing clear standards for use of force, prosecuting officers who use excessive force and requiring officers to report misconduct by their peers.
Despite their popularity, body cameras have not always proved to be the fix reformers hoped. But Kimberly Jones, 52, of New York City, said they are at the top of her list.
“You need more seeing what’s going on as they’re pulling up on people,” she said. “You need to know from the start so you can stop something bad from happening.”

Majorities of Democrats and Republicans alike strongly support establishing clear standards for use of force, requiring officers to wear video cameras and requiring officers to report misconduct by their peers. There also is bipartisan support for prosecuting officers who use excessive force and penalizing officers for racially biased policing, though more Democrats than Republicans intensely favor these policies.
Brian Bernard, 54, a Republican and retired IT worker from Baton Rouge, Louisiana, said the bystander video of Floyd’s death was like watching a “9-minute murder.” But he said the problem is one of a bad cop, not a bad system. Banning chokeholds or requiring retraining won’t make a bad officer better, he said.
“Democrats and liberals seem to have a problem of only fixing symptoms,” he said. “They can never see the actual problem, and the problem is just a bad cop.”
While chants of “defund the police” have become a rallying cry at some protests, the survey found that only 25% of Americans favor reducing law enforcement funding. Democrats are somewhat more likely to support than oppose doing so, 41% to 33%, while Republicans are overwhelming opposed.
Bob Haines, 75, a pilot from Oklahoma City who supports President Donald Trump, said he thinks police officers do an excellent job.
“Just like in my profession, most of us do a good job, but there are a few bad pilots,” Haines said. “A couple of incidents have happened, and all of a sudden the sky’s falling, you know?” 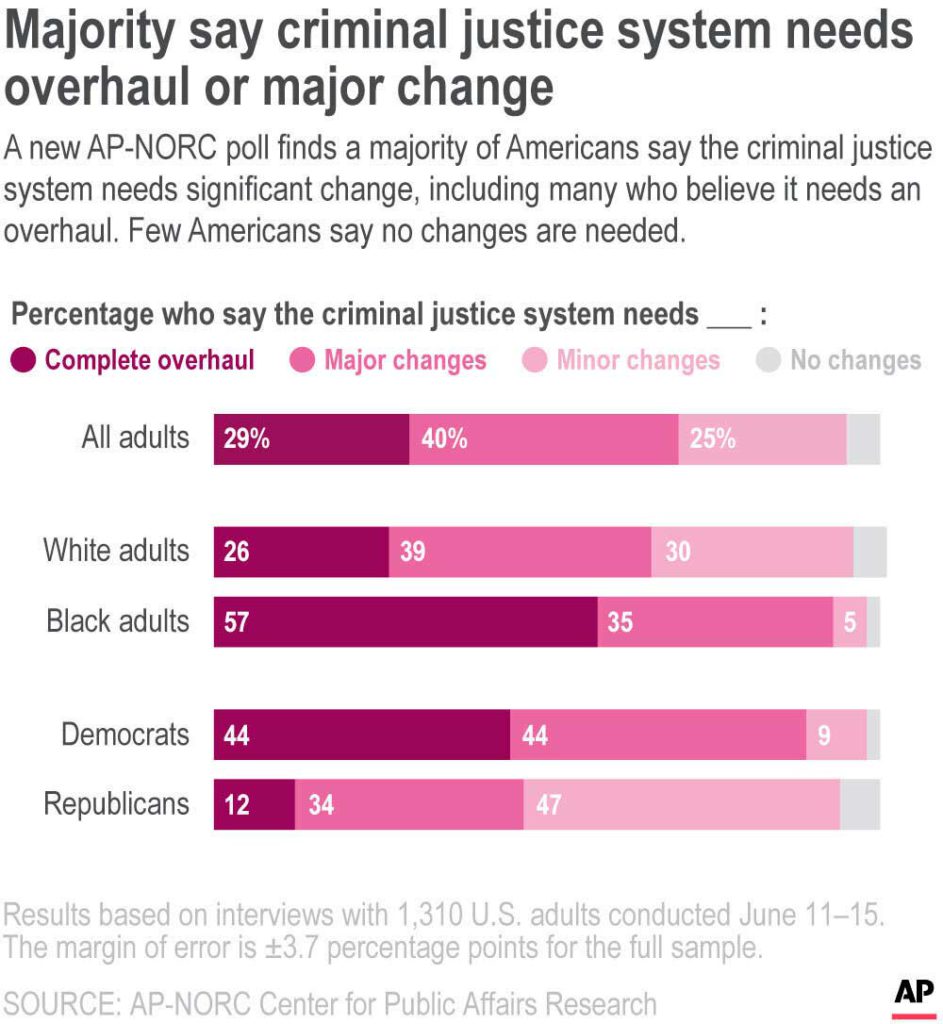 Democrats and Republicans divide on whether the justice system should reduce the focus on policing and prosecuting low-level offenses, with 63% of Democrats and 30% of Republicans in favor. Overall, Americans are more likely to be in favor than opposed, 46% to 25%.
To prevent police violence, most Americans also favor requiring all officers to participate in more extensive racial bias training. Majorities of Americans think that police are more likely to use deadly force against a Black person and that Black Americans are generally treated less fairly by police.
Pecknold, who favors moderate changes in the criminal justice system, said those changes should be targeted at chipping away at systemic racist behavior.
“I don’t think Americans really understand how police are taught these tactics to begin with,” she said. “Understanding the details more will help us make smarter changes.”

T-Mobile Pulls Back Pledge to Create 1,000 Jobs in Kingsburg