A slow-moving storm dropped more than a quarter-inch of rain Sunday on Fresno and is expected to bring more rain and Sierra snow through Thursday night.

Sunday’s rain brought Fresno’s totals to 1.72 inches for March and 5.26 inches for the water year, which runs from July of the preceding year through June of the current year.

Colder storm system expected Wednesday & Thursday. A dusting up to a couple of inches of snow accumulation expected on the Grapevine along I-5 & Tehachapi Pass along HWY 58 in Kern Co. Snow levels around 4,000 feet on Wed & lowering to 3,000 feet late Wed night into Thu. #CAwx pic.twitter.com/iIjE9JXlyc

The average rainfall for March in Fresno is 2.03 inches, according to the National Weather Service. The city, on average, receives 9.72 inches during the water year through March 22. Fresno’s historic water-year average is 11.50 inches.

Dry Weekend Ahead for Valley

“This system is projected to only slowly move southward across the forecast area through Thursday and this slow speed will keep the threat of rain and snow going into Thursday night before the low (pressure system) moves east out of the area,” the NWS-Hanford said in its daily online forecast. The forecast looks dry from Friday through the upcoming weekend as the storm track lifts north.” 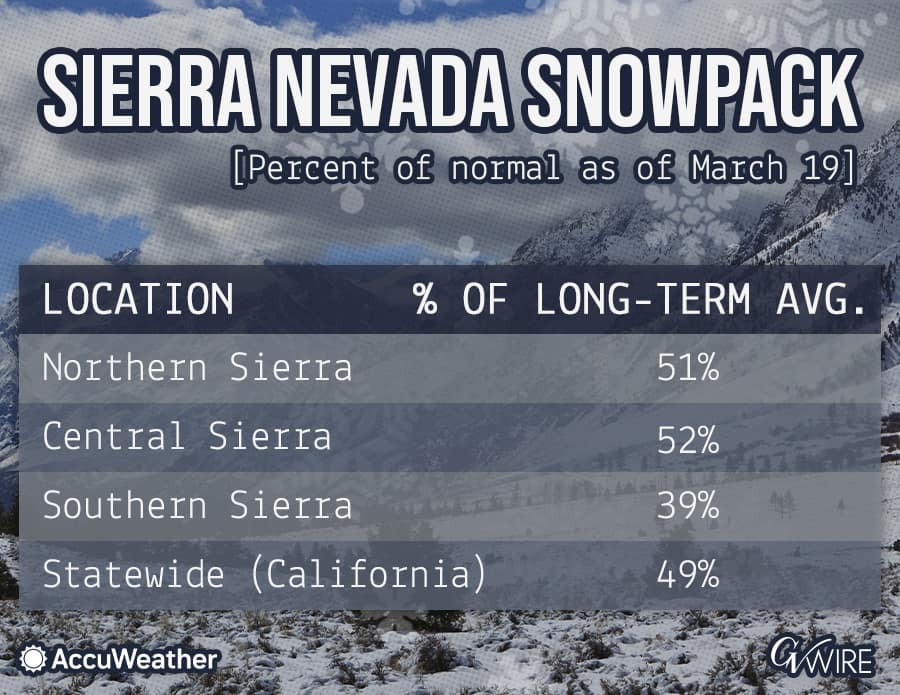 Storms drenched much of Southern California over the weekend.

Parts of Santa Barbara County recorded nearly 3 inches of rain during a 24 hour period, according to the National Weather Service. A record 1.73 inches fell at Los Angeles International Airport, topping the previous mark of .82 inches.

The weather service posted winter weather advisories through Monday afternoon for the mountains north and east of Los Angeles.