PHOENIX — Pastor Antonio Velasquez says that before the Trump administration announced a crackdown on immigrants using government social services, people lined up before sunrise outside a state office in a largely Latino Phoenix neighborhood to sign up for food stamps and Medicaid.

“You had to arrive at 3 in the morning, and it might take you until the end of the day,” he said, pointing behind the office in the Maryvale neighborhood to show how long the lines got.

But no one lined up one recent weekday morning, and there were just a handful of people inside.

With new rules taking effect Monday that disqualify more people from green cards if they use government benefits, droves of immigrants, including citizens and legal residents, have dropped social services they or their children may be entitled to out of fear they will be kicked out of the U.S., said Velazquez and other advocates.

The guidelines that aim to determine whether immigrants seeking legal residency are likely to become a government burden are part of the Trump administration’s broader effort to reduce immigration, particularly among poorer people.

The rules that critics say amount to a “wealth test” were supposed to take effect in October but were delayed by legal challenges that allege the move violates due process under the U.S. Constitution. The Supreme Court last month cleared the way for the Trump administration to move forward while the legality of the rules are litigated in the courts.

A 5-4 vote Friday by the high court sided with the Trump administration by lifting a last injunction covering just Illinois. Justice Sonia Sotomayor issued a blistering dissent, criticizing the administration for quickly turning to the Supreme Court after facing losses in lower courts.

The White House over the weekend expressed gratitude for that final vote, saying it would help “safeguard welfare programs for truly needy Americans, reduce the federal deficit, and re-establish the fundamental legal principle that newcomers to our society should be financially self-reliant and not dependent on the largess of United States taxpayers.”

Federal law already requires those seeking to permanent residency or legal status to prove they will not be a burden to the U.S. — a “public charge,” in government lingo. But the new rules include a wider range of programs that could disqualify them, including using Medicaid, food stamps and housing vouchers.

“Self-sufficiency is a core American value and has been part of immigration law for centuries,” Ken Cuccinelli, acting deputy Homeland Security secretary, said last month. “By requiring those seeking to come or stay in the United States to rely on their own resources, families and communities, we will encourage self-sufficiency, promote immigrant success and protect American taxpayers.” 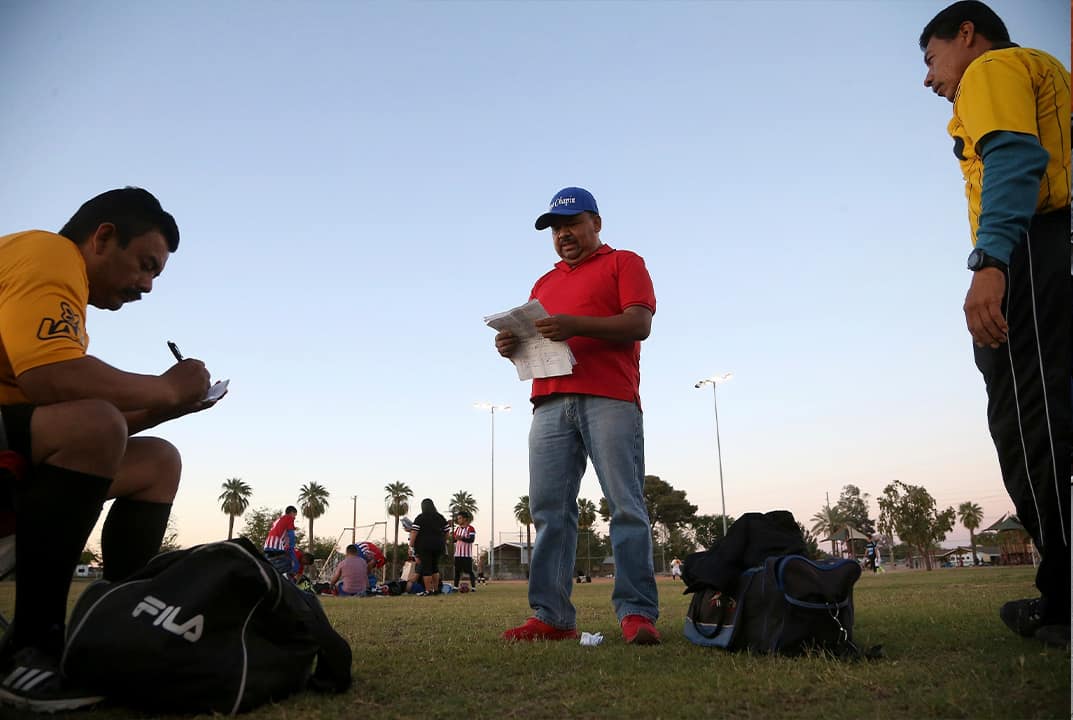 FILE – In this April 17, 2019, file photo Antonio Velasquez, center, a pastor and director of the Maya Chapin soccer league, gives referees their game assignments in Phoenix. Velasquez says before the Trump administration announced a crackdown on immigrants using government social services, people lined up before sunrise outside a state office in his neighborhood to sign up for food stamps and Medicaid. (AP Photo/Ross D. Franklin, File)

The chilling effect spreading through immigrant communities recalls how millions of refugees dumped social services during the welfare changes of the 1990s, even though the legislation that prompted the cuts explicitly exempted them.

“To call them a burden on society is factually incorrect.” — Nazanin Ash, Washington-based vice president for global policy and advocacy for the nonprofit International Rescue Committee

Nazanin Ash, Washington-based vice president for global policy and advocacy for the nonprofit International Rescue Committee, pointed to research showing some 37 percent of refugees exempted from the Clinton-era changes in welfare benefits dropped food stamps they were entitled to.

Ash said the Trump administration rules would likely cause similar hardships for immigrants who contribute to the American economy.

“To call them a burden on society is factually incorrect,” she said.

The nonprofit Migration Policy Institute in Washington said in an August policy paper that it expects “a significant share” of the nearly 23 million noncitizens and U.S. citizens in immigrant families who use public benefits will drop them.

Julia Gelatt, a senior policy analyst with the institute, said the guidelines are so complicated that there have even been reports of parents dropping their kids’ free school lunches, which are not affected.

‘People Are Very Scared About the Rules’

Gelatt noted that the rules apply only to social services used after Monday and do not affect citizens or most green card holders. Refugees vetted by the State Department and other federal agencies before their arrival in the U.S., as well as people who obtain asylum, are not affected.

The guidelines don’t apply to many programs for children and pregnant and postnatal women, including Head Start early childhood education and the Supplemental Food Program for Women, Infants and Children.

Nevertheless, Stephanie Santiago, who manages two Phoenix-area clinics for the nonprofit Mountain Park Health Center, said during the last three months of 2019 she suddenly saw scores of immigrants drop those and other benefits.

“People are very scared about the rules,” Santiago said. “The sad thing is that they even drop the services their U.S. citizen kids qualify for. A lot of these kids are going to school sick or their parents are paying out of pocket for services they should get for free.”

Cynthia Aragon, outreach coordinator for the nonprofit Helping Families in Need in Phoenix, said that because of the confusion, she is steering people to private sources of aid, like food banks and church-run clinics.

“I think people will start applying for government services again after it becomes clearer how things are going to work,” Aragon said. “In the meantime, we tell immigrants to look for some of the other resources out there and don’t feel like a victim.”