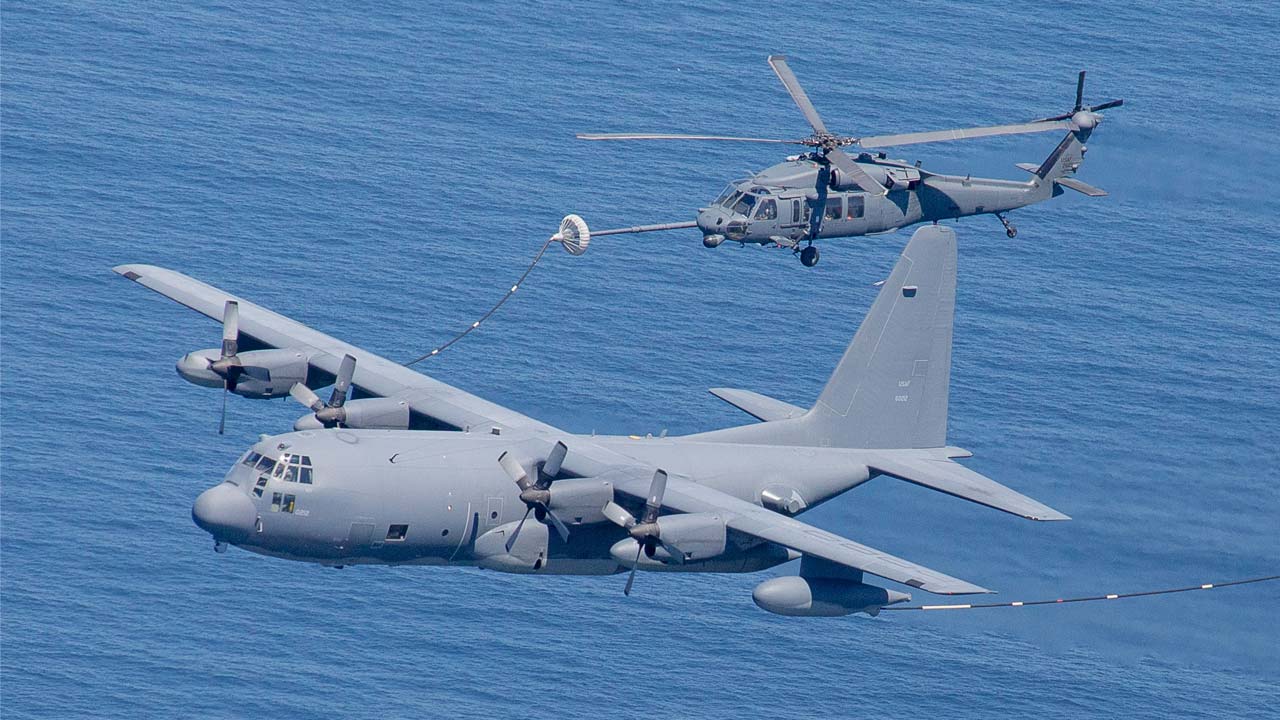 A military plane that played a pivotal role in a daring Vietnam War mission will make Castle Air Museum in Atwater its new home.
Aircraft 0212, a Lockheed MC-130P outfitted for special operations, helped guide the daring 1970 Son Tay Raid to rescue prisoners of war being held captive in North Vietnam.

Listen to this article:
The hulking turboprop Combat Shadow aircraft is being retired after a 50-year career with the U.S. Air Force and Air National Guard. The plane is currently assigned to the Air Guard’s 129th Rescue Wing at Moffett Federal Airfield in Mountain View.
It will become part of Castle Air Museum’s permanent collection following a special ceremony Oct. 26. The POW rescue mission, code-named Operation Kingpin, was launched from Thailand and South Vietnam on the night of Nov. 20, 1070.  The MC-130 was one of two guide planes that led a force of Sikorsky Jolly Green Giant combat helicopters, A-1 Skyraider attack planes, and 56 ground assault troops into hostile North Vietnam territory.
It is considered by some experts as a model for special operations missions conducted by the US military.
The rescuers’ objective was the Son Tay prison camp where up to 70 captured Americans were believed to be held. The airspace around the compound, just 23 miles from Hanoi, was considered to be among the most heavily defended in the world at the time.
Aircraft 0212 was designed for clandestine missions and was specially equipped for low-level, night-time navigation.

The raiders were successful in reaching their target undetected and the resulting assault on Son Tay was executed largely as planned. However, once the rescuers were on the ground, they discovered all of the POWs were gone.
Even so, Operation Kingpin was considered a “tactical” success. Word of the raid soon spread to the nearly 500 POWs held across North Vietnam, which boosted their morale. The late Sen. John McCain, a POW at the time, is reported to have described his “elation” at hearing of the attempted rescue.
The large and complex rescue attempt resulted in no American loss of life and just two minor injuries to mission personnel, despite active engagement with enemy forces.

After its active duty service, the MC-130 joined the Air Guard wing where it performed rescue and recovery missions. According to the air wing’s website, its National Guard members and aircraft have assisted with saving more than 1,000 lives over the past quarter-century.
The Combat Shadow will now join more than 70 vintage military aircraft on display at Castle Air Museum. Castle’s collection includes restored planes dating to WWII and is described as the largest aviation museum between Southern California and the state of Washington.
The 25-acre museum is located on the site of the former Castle Air Force Base and opened to the public in 1981.