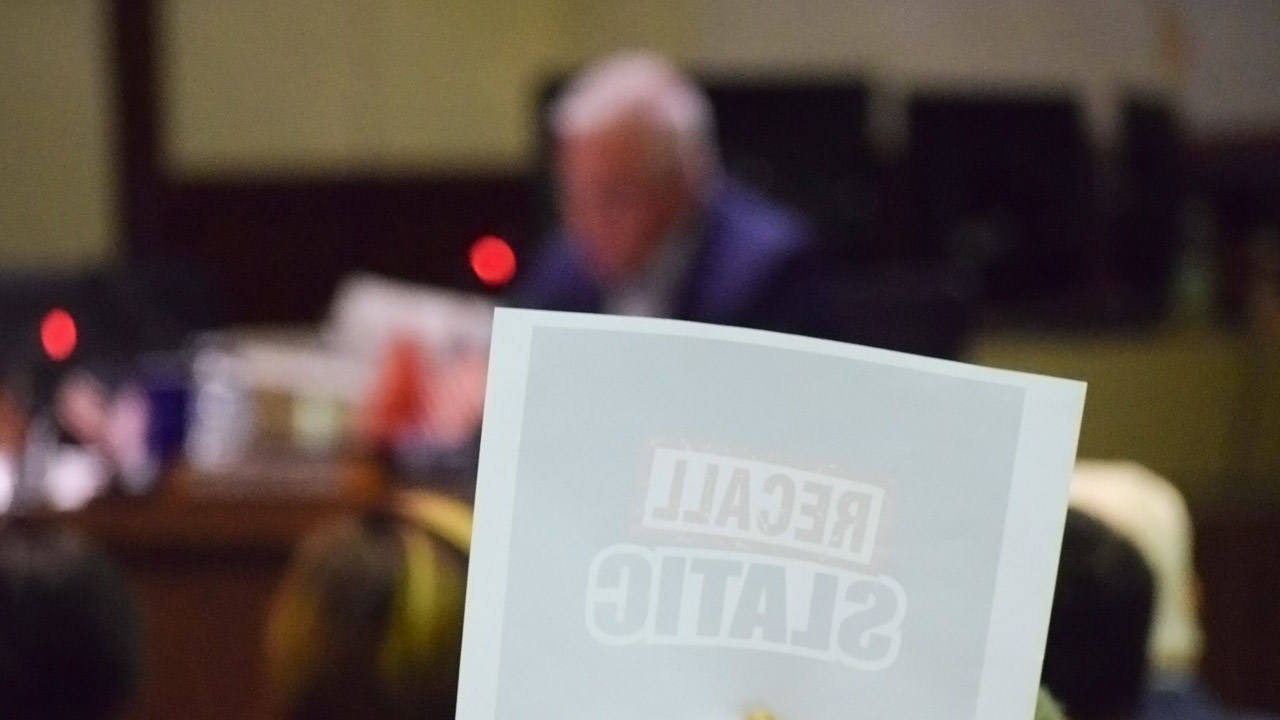 The Fresno Unified School Board voted 6-0 to censure trustee Terry Slatic, a rare public condemnation of a fellow elected official, and to strip him of leadership functions until he successfully completes an anger management course.
The vote was met by thunderous applause from the packed audience, many carrying signs urging Slatic to resign or face recall.

Members of the public spoke before the board’s vote on the censure resolution, many urging Slatic to resign from the board rather than subject the district to further turmoil and expense. 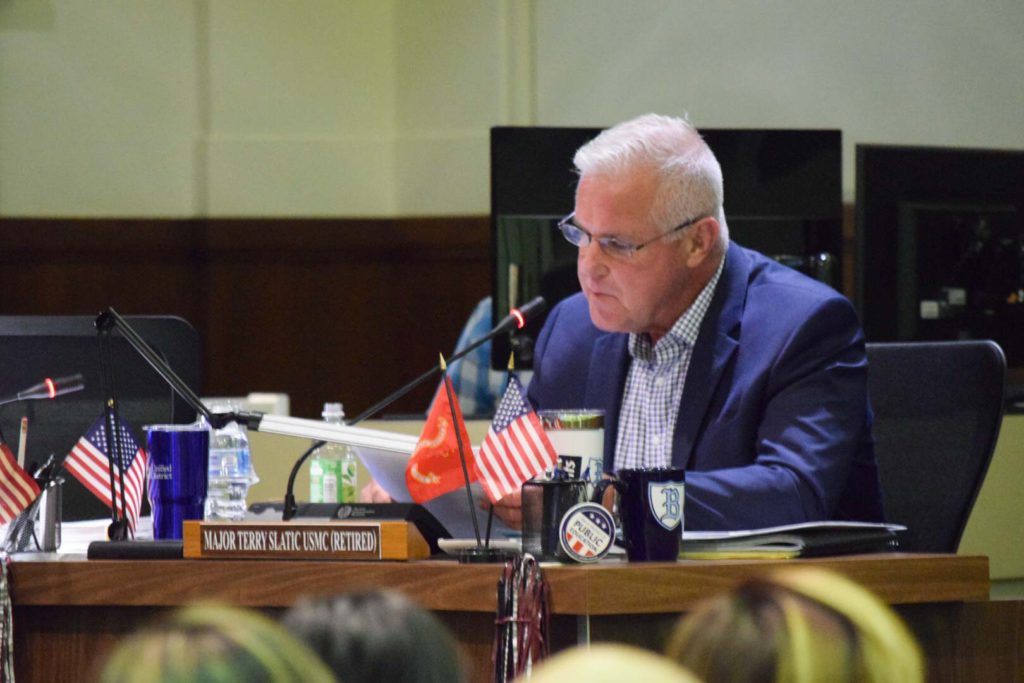 Stacy Williams, who is helping to organize recall efforts, told GV Wire before the board meeting that she expects Slatic will be served with a letter of intent by organizers of a recall campaign within the next seven days.
The censure puts Slatic on notice that if he fails to comply with the resolution, or board policies and bylaws, the board could strip him of his board member’s indemnification covering his actions as a trustee if any legal claims or actions result from his conduct. Thomas, who also served on the ad hoc committee, added a revision that the board would also refuse to defend Slatic in legal proceedings.
“In my mind he is creating litigation,” Thomas said. “And when you create litigation and not take responsibility, then I believe that this (to no longer indemnify Slatic or defend him legally) should happen.”

One legal action already is underway: A Bullard High School cheerleader is seeking a restraining order against Slatic, who is accused of threatening to boot off the squad any girls who comment on the discipline that resulted from a social media post of a cheerleader wearing blackface and saying the n-word.
A Fresno County Superior Court temporary judge continued a hearing this week until Aug. 26 after finding Slatic had not been properly served with legal papers. Meanwhile, the board requested an investigation into whether Slatic was authorized to attend the cheerleaders’ practice where the alleged threat was made. 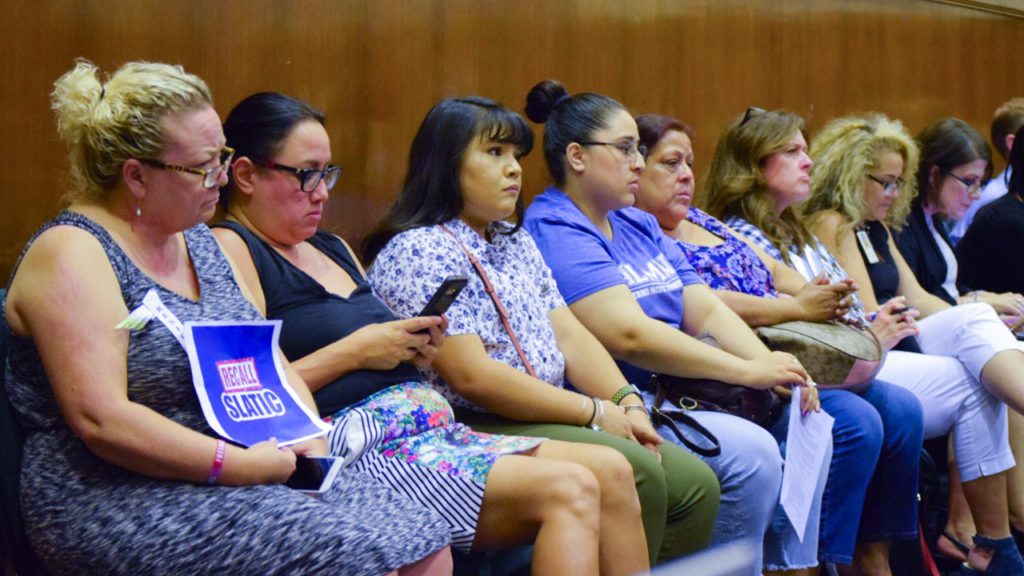 Supporters of efforts to recall Slatic turned out in force at Wednesday’s Fresno Unified board meeting. (GV Wire/Nancy Price)

A process server reported during the public comment period at Wednesday’s meeting that she had served the legal notice to Slatic at 4:32 p.m. Wednesday.

The censure resolution orders Slatic to comply with state and federal law, board policy, regulations and bylaws, and to stop engaging in abusive and disrespectful treatment of district employees, students, fellow trustees, and the public. It prohibits him from attending internal staff meetings or meetings between the administration and third parties such as students or parents unless he is authorized to attend by board action or the board president’s approval.
Also, he can’t visit a district school site unless he is accompanied by a school site representative, a revision of the board’s vote at a special meeting July 18 that required a district administrator to escort Slatic on any site visits. The board also voted then to ban him from the Bullard High campus for 14 days.

The resolution found Slatic has “engaged in abusive and unprofessional conduct with staff, students, fellow trustees, and members of the public, and exceeded his role as a board member.” It also found that his behavior, language, and conduct toward district employees, students, and the public violate district policies and board bylaws.
He is accused of making “inappropriate demands” in excess of his authority as an individual board member, and of raising his voice to district staff and other trustees. The incidents have hurt staff morale and are a distraction from the primary mission of educating children, the resolution says.

The resolution outlines a series of incidents involving Slatic and a Bullard High student, a Bullard wrestling coach, an Army recruiter at the campus, and the Bullard cheerleaders, all of which have been or are being investigated by the district. The first incident involving the 15-year-old Bullard student on campus was in January, barely two months after Slatic was elected.
Slatic maintains the district’s investigations are “weaponized” and not impartial.
The district’s legal and investigative costs of investigating Slatic totaled $114,000 through the end of June, and continue to mount. 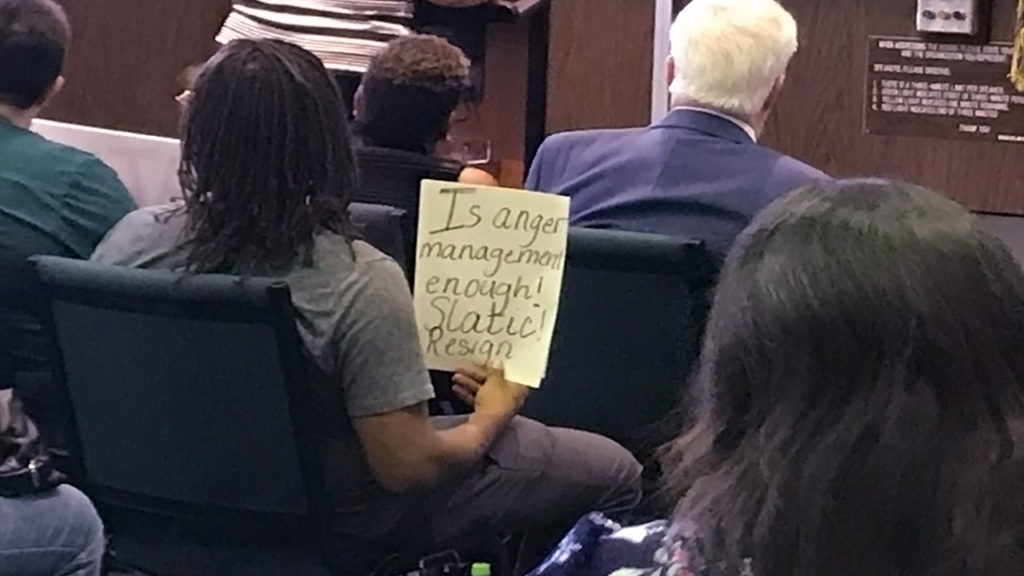 Some critics of Slatic brought homemade signs to the board meeting. (GV Wire/Nancy Price)

In an earlier version of this story, a comment by Trustee Keshia Thomas was mistakenly attributed to Trustee Veva Islas. This has been corrected.
Related Topics:blackfaceBullardcensurecheerleaderFresno UnifiedresolutionSlaticTerry Slaticwrestling
Up Next