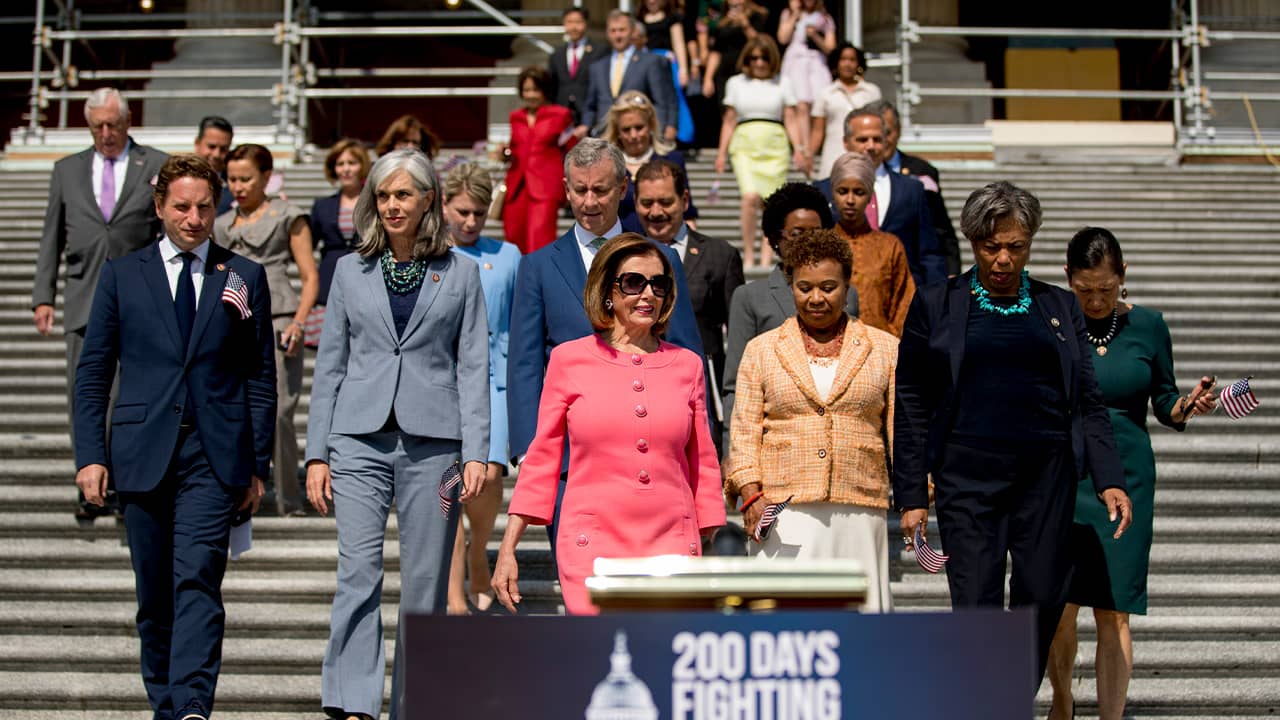 WASHINGTON — Nearly half the House Democrats now support an impeachment inquiry of President Donald Trump — a milestone but still probably not enough to push Speaker Nancy Pelosi to launch proceedings.
A tally by The Associated Press on Wednesday showed 114 Democrats in the House, and one Republican-turned independent, are now publicly backing an inquiry, a notable spike in the days since special counsel Robert Mueller testified on Capitol Hill. Some two dozen House Democrats, and two top senators, added their names after Mueller’s public appearance last week.

‘Repeated Abuses Have Brought American Democracy to a Perilous Crossroads’

Still, what’s striking about the growing list of House Democrats who support some sort of impeachment inquiry is as much the names as the numbers.
This week, Rep. Eliot Engel of New York, the chairman of the Foreign Affairs Committee, became the ninth to call for impeachment inquiry — almost half of the House’s committee chairmen now on record in favor.
Engel said the president’s “repeated abuses have brought American democracy to a perilous crossroads.” His committee is among those investigating Trump’s business dealings and ties to Russia – and running into obstruction by the administration that some say are grounds for impeachment.
Also joining the list in the immediate aftermath of Mueller’s testimony was a top party leader, Rep. Katherine Clark, D-Mass., the vice chair of the Democratic caucus, who said the House has been met with “unprecedented stonewalling and obstruction” by the Trump administration.

“That is why I believe we need to open an impeachment inquiry that will provide us a more formal way to fully uncover the facts,” she said.
Two top Democratic senators, Patty Murray of Washington and Debbie Stabenow of Michigan, the third and fourth-ranking members of leadership, also announced their support for a House impeachment inquiry.
Republican-turned independent Rep. Justin Amash of Michigan announced his support for impeachment shortly after he said he read Mueller’s findings about Russian interference in the 2016 election and the Trump administration’s response.

Mueller’s Testimony Was Supposed to Be Game Changer

Mueller’s testimony was supposed to be a game changer, his appearance months in the making since the April release of his 448-page report. But the 74-year-old Mueller’s halting testimony and one-word answers left a mixed result.

Critics Say Pelosi Is Depriving Democrats of a Clear Vote

The former White House counsel is among long list of administration officials who have refused to testify or provide documents to the panel under orders from Trump. The suit would challenge White House claims that such officials have “absolute immunity” from such testimony.
In a separate case, the committee is in court trying to obtain secret grand jury information underlying Mueller’s report. In a court filing Wednesday, the committee and the Justice Department agreed to next steps in that matter by the end of September, pushing any resolution until October.

Pelosi is of the mindset that impeachment should not be done for political reasons, or not done for political reasons, as she pursues a step-by-step case. In many ways, she is protecting those lawmakers who joined the House from districts Trump creating the House majority, from having to make tough choices on impeachment. But critics say Pelosi is depriving Democrats of a clear vote on impeachment, and they say that decision will leave voters deflated for the 2020 election.
The group Stand Up America, which is part of a coalition with MoveOn, Indivisible and other advocates of impeachment, believes the August recess will be a critical moment to convince lawmakers to go on the record.
“If lawmakers in Congress haven’t felt the pressure to start an impeachment inquiry, they haven’t been listening,” said Eldridge, the group’s founder and president, in a statement. “During the August recess we will ensure that every member of Congress hears from their constituents on why it’s the only path forward.”
Related Topics:House DemocratsHouse Speaker Nancy PelosiimpeachmentPresident Donald TrumpRepublicanRobert Mueller
Up Next

After 'Send Her Back!' Chant, Ohio Rally a Test for Trump