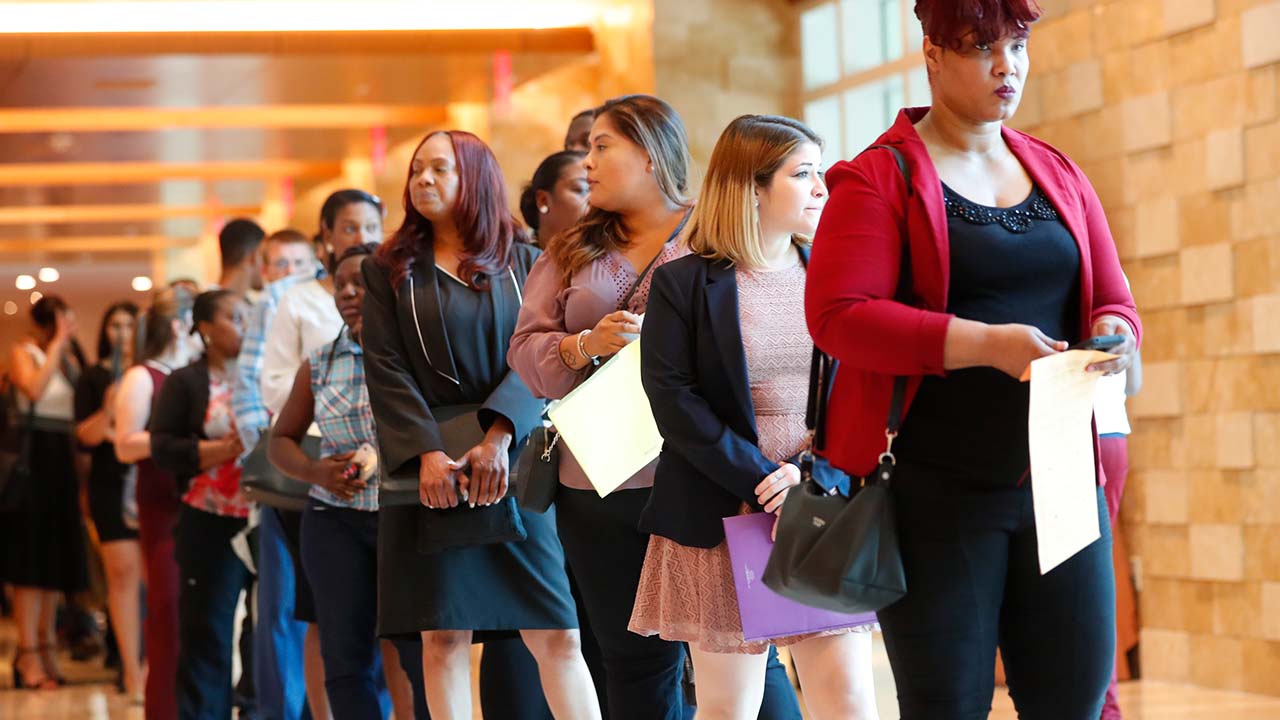 WASHINGTON — U.S. employers sharply stepped up their hiring in June, adding a robust 224,000 jobs, an indication of the economy’s durability after more than a decade of expansion.

The unemployment rate ticked up to 3.7% in June from 3.6% for the previous two months, reflecting an influx of people seeking jobs who were initially counted as unemployed. Average hourly wages rose 3.1% from a year ago.
The strength of the jobs report the government issued Friday could complicate a decision for the Federal Reserve late this month on whether to cut interest rates to help support the economy. Most investors have anticipated a rate cut in July and perhaps one or two additional Fed cuts later in the year. That scenario may be less likely now.
Stocks sold off early Friday before paring their losses later. The Dow Jones Industrial Average closed down a modest 43 points. But the yield on the 10-year U.S. Treasury note climbed to 2.04% from just under 2% before the jobs report was released, reflecting a view that the Fed might now be less inclined to cut rates multiple times.

Jobs Back on the Rebound

June’s solid job growth followed a tepid gain of 72,000 jobs in May, a result that had fueled concerns about the economy’s health. But with June’s pace of hiring, employers have now added, on average, a solid 171,000 jobs for the past three months. Last month’s burst of hiring suggests that many employers have shrugged off concerns about weaker growth, President Donald Trump’s trade wars and the waning benefits from U.S. tax cuts.
“Although there are drags on the economy in 2019, the expansion should continue through this year,” said Gus Faucher, chief economist at PNC Financial Services. “The doom and gloom was overblown.”
The unemployment rate ticked up to 3.7% in June from 3.6% for the previous two months, reflecting an influx of people seeking jobs who were initially counted as unemployed. Average hourly wages rose 3.1% from a year ago.

Last year, Fed officials raised rates four times, in part to stave off the risk of high inflation and in part to try to ensure that they would have room to cut rates if the economy stumbled.
On Friday, the Fed reiterated that it would act as necessary sustain the economic expansion, while noting that most Fed officials have lowered their expectations for the course of rates. The Fed’s statement came in its semiannual report on monetary policy.
In Friday’s jobs report for June, the hiring gains were broad. Construction companies added 21,000 workers after having increased their payrolls by only 5,000 in May. Manufacturers hired 17,000, up from just 3,000 in May. Health care and social assistance added 50,500 jobs. Hiring by transportation and warehousing companies increased 23,900.

The government sector was a major source of hiring, adding 33,000 jobs in June. Nearly all those gains were at the local level.
For Todd Leff, CEO of Hand & Stone Massage and Facial Spa, the resilience of the U.S. job market has provided both an opportunity and a challenge. With more Americans earning steady paychecks, demand for massages and facials has increased, and the company plans to add 60 locations this year and roughly 1,800 jobs. But the low unemployment rate has also made it hard to find and retain workers.
“We could hire 1,000 more employees today — if they were available,” said Leff, whose company has about 430 locations and is based in Trevose, Pennsylvania.
Investors have been turning their attention to the Fed, which has expressed concern about threats to the economy, especially the uncertainties from Trump’s trade wars, and about inflation remaining persistently below its 2% target level. A Fed rate cut, whenever it happens, would be its first in more than a decade.

Fed Chief Will Testify Next Week

Joshua Shapiro, chief U.S. economist for the consultancy MFR, said the likelihood of a Fed rate cut late this month is now slightly lower, though he still estimates that the federal funds rate — what banks charge each other — will be sharply lower by the end of next year.
Ryan Wang, U.S. economist at HSBC Bank, suggested that the solid jobs report might create a communications challenge for Fed Chairman Jerome Powell when he testifies Wednesday and Thursday to congressional committees.
The financial markets still foresee a rate cut of 25 points this month, Wang said, adding, “It will be important to see if Chair Powell lays out on a strong case for near-term monetary easing in his testimony next week.”
The sluggish pace of hiring in May had signaled that employers might have grown more cautious because of global economic weakness and, perhaps, some difficulty in finding enough qualified workers at the wages that companies are willing to pay.
The pace of the overall economy is widely thought to be slowing from annual growth that neared a healthy 3% last year. Consumer spending has solidified. Home sales are rebounding. But America’s manufacturing sector is weakening along with construction spending. Growth in the services sector, which includes such varied industries as restaurants, finance and recreation, slowed in June.

Armed Utah Teachers Don't Want to Be a 'Sitting Duck'