A member of the Bulldogs street gang is headed to federal prison after being found guilty on drug and human trafficking charges Thursday.

Filiberto “Beto” Chavez, 37, was found guilty of distributing and possessing methamphetamine, and conspiracy to engage in interstate travel for prostitution. A federal grand jury also convicted Chavez on two counts of promoting prostitution. 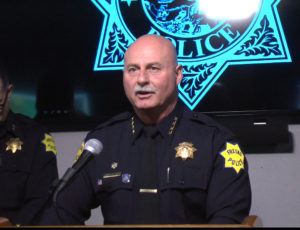 “It excites me to see ruthless gang members removed from our society, especially those like Filiberto Chavez who treat women as property through violent acts of sex trafficking. Filiberto Chavez and his fellow conspirators have proven they belong behind bars.” — Fresno Police Chief Jerry Dyer

Chavez is scheduled to be sentenced by U.S. District Judge Lawrence J. O’Neill on Aug. 5. Chavez faces a maximum statutory penalty of life in prison.

“This verdict is the result of law enforcement partners at the federal, state and local level working as one to pursue criminal gangs and their associates,” said U.S. Attorney McGregor W. Scott. “We will continue to work tirelessly together to protect our communities and to hold accountable those who threaten our safety.”

Read more about the takedown of the gang’s leadership at this link.

“I congratulate U.S. Attorney Scott and Assistant U.S. Attorneys Kimberly Sanchez, Jeffrey Spivak, and Thomas Newman on an outstanding job bringing Filiberto Chavez to justice,” Smittcamp said. “This conviction is yet another example of how cooperation between our local law enforcement agencies, the District Attorney and the United States Attorney works for the people of Fresno County.”

Said Fresno Police Chief Jerry Dyer: “It excites me to see ruthless gang members removed from our society, especially those like Filiberto Chavez who treat women as property through violent acts of sex trafficking. Filiberto Chavez and his fellow conspirators have proven they belong behind bars.”

When Chavez and others were arrested in September 2017, Dyer called them “scum of the earth” for trafficking in women and girls, some in their early teens.

The “Alpha Dog” law-enforcement effort was built upon wiretap surveillance begun in 2016.

Additionally, in June and July of 2017, Chavez was pimping a prostitute using the assistance of Padilla to post prostitution ads on the internet. Chavez invited convicted codefendants Carlos Montano and Miguel Murillo to join him in New York to engage in prostitution activities with each of their prostitutes.