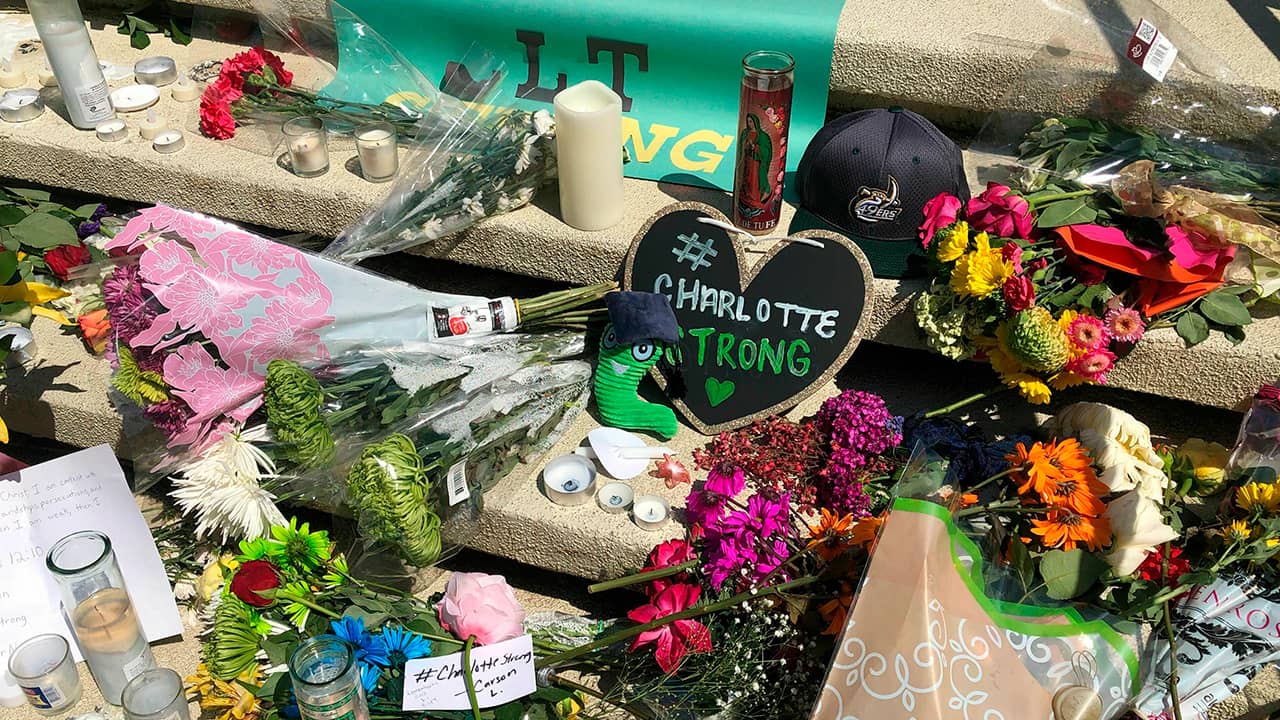 CHARLOTTE, N.C. — Students frantically call for help as a deadly shooting unfolds on a North Carolina campus in 911 recordings released Friday, with one saying the gunman was “still shooting” as she fled the classroom where he opened fire.

Charlotte government officials released 48 emergency calls placed by students and faculty members in minutes after the Tuesday shooting that killed two and wounded four at the University of North Carolina-Charlotte.

“We need police. We have an active shooter in Kennedy. We heard five shots. We don’t know how many shooters.” — 911 caller

Also on Friday, memorial arrangements were made for the two students killed in the shooting. The parents of sophomore Reed Parlier, identified by authorities by his first name Ellis, said in an interview that their son was reserved but also quick to crack a joke and aspired to be a game developer.

The emergency calls give a sense of the chaos unfolding as students fled or hunkered down — and desperately sought help for the wounded.

“We need police. We have an active shooter in Kennedy,” one caller said, indicating he was relaying information from the teacher who was in the classroom where it happened. “We heard five shots. We don’t know how many shooters.”

Another caller was asked if she needed police, firefighters or paramedics. She replied: “All of it.”

At least two callers were students fleeing from the classroom where it happened. One said the gunman was wearing black and carrying a pistol, adding: “He was still shooting when we were leaving.”

The Panic Also Forced Students to Flee Nearby Buildings

Another, sounding out of breath, said: “There is someone shooting. … He ran into the classroom I was in.”

The panic also forced students to flee nearby buildings as word spread quickly.

“He sat at the table next to my table. He was quiet and wore dark clothes, and honestly what you think of a school shooter being.” — Cooper Creech in reference to shooter

“I was in there just trying to print something out and someone ran in and shouted shooter,” said a caller leaving another building. “Someone came in yelling, so I ran.”

The motive wasn’t clear. The man charged in the shooting, Trystan Andrew Terrell, had been a student at the university but withdrew before the end of this semester, officials said. Authorities said he targeted Kennedy Hall specifically, but detectives haven’t determined if he chose the class or individuals as targets.

The lecturer who taught the class said in a blog post that the suspect had been registered for the course and seemed engaged in the material but stopped coming in January.

Cooper Creech, who witnessed the shooting, said he remembered Terrell from the class.

“He sat at the table next to my table,” Creech said. “He was quiet and wore dark clothes, and honestly what you think of a school shooter being.”

Another student in the class, senior Jack Crooks, said the gunman appeared calm and stood still as he fired approximately six shots.

“It didn’t seem like he really had a target,” Crooks said in an interview, adding he didn’t remember Terrell from when he attended class.

Riley Howell Was Fatally Wounded While Tackling the Gunman

A memorial is scheduled Sunday for Riley Howell, who was fatally wounded while tackling the gunman. Howell has been called a hero.

A private memorial service will be held for Parlier, whose family declined to give specifics because of privacy concerns.

“When he was 2 years old, he was telling complex jokes. He’d blend into the background and all of a sudden he’d make some witty remark about what was going on that would just take you by surprise.” — Reed Parlier’s father

In some of their first comments since the shooting, Parlier’s parents said in a phone interview that he spent summers volunteering as a tutor for younger programmers.

Brian Parlier called his son “a math man” who was exceptionally bright. The father recalled a meeting with his son’s kindergarten teacher, who was astounded at his multiplication skills.

“He already knew his multiplication tables because I had been teaching him those at dinner since he was two, and she did not believe me,” he said. “So I asked him ten multiplication problems in front of her, and he answered all of them correctly. And she was dumbfounded.”

Parlier’s parents said memories of his sense of humor have helped them to smile despite immense grief.

“When he was 2 years old, he was telling complex jokes,” his father said. “He’d blend into the background and all of a sudden he’d make some witty remark about what was going on that would just take you by surprise.”

His mother, Julie Parlier, said Reed loved hiking and camping in western North Carolina. He was extremely close to his family, especially his parents and his younger sister.

“He was not your typical 19 year-old in that he liked to be at home,” she said. “He was very affectionate.”

Government to House More Migrants in Tents at the Border